Listen
Alexander Solzhenitsyn, A 'Man With A Mission'

The Nobel Prize-winning author whose books chronicled the horrors of the Soviet gulag system has died of heart failure. Alexander Solzhenitsyn was 89.

NPR's Anne Garrels talks with Steve Inskeep about a rare interview she had with Solzhenitsyn just after he was expelled from the Soviet Union in the 1970s.

Garrels says that when it came to interviews, Solzhenitsyn was a "man with a mission, and it was basically ... everyone's obligation to support him." 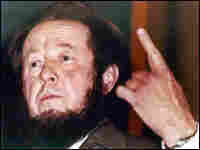 Alexander Solzhenitsyn, shown in a 1970 file photo after accepting his Nobel Prize for literature, died Sunday at the age of 89. AP hide caption

Alexander Solzhenitsyn, the Russian literary giant who shook the foundations of the Soviet state with his works exposing the horrors of the Communist regime, died Sunday night at his home outside Moscow. He was 89 years old and, according to his son, died of heart failure.

For years, Solzhenitsyn had written with scant hope of seeing his works in print. Then, in 1962, during the brief post-Stalin thaw, Soviet leader Nikita Khrushchev ordered the publication of Solzhenitsyn's short novel, One Day in the Life of Ivan Denisovich.

The story, set in a Soviet labor camp in the 1950s, describes a single day of an ordinary prisoner, a day that was unremarkable for millions of prisoners like him, despite the brutal hardships.

Human-rights activist Liudmila Alexeeva, in an interview with NPR, recalled the publication of Ivan Denisovich in an official journal, Novy Mir (New World), as a great event in Soviet public life. "It meant that this topic, after this event, would no longer be a forbidden topic."

And so, Solzhenitsyn, an unknown math teacher from the provinces, leapt to fame. But when Khrushchev was ousted from power, the hard-liners who replaced him stopped publication of his new works and had him expelled from the Soviet writers union. This did not silence him, however. He had his work smuggled out of the country and published abroad, where the literary greats of Europe and the U.S. took up his cause. Solzhenitsyn came to personify resistance to Communist repression.

In 1970, the Nobel committee awarded him the literature prize, citing "the ethical force with which he has pursued the indispensable traditions of Russian literature." He did not travel to Stockholm to receive the prize, for fear he would not be allowed back into the Soviet Union.

Solzhenitsyn did not start out as an anti-Soviet crusader. He was born in southern Russia, in 1918, the year after the Bolshevik Revolution. He grew up fatherless, in extreme poverty, during the tumultuous formative years of the Soviet Union — an era of civil war, famine and repression.

While serving at the front as an officer in the Red Army during World War II, Solzhenitsyn was arrested. The secret police had intercepted his correspondence with a school friend criticizing Stalin. He believed the Soviet dictator had betrayed the revolution.

Biographer Michael Scammell says that Solzhenitsyn had not yet lost faith with the Soviet system. He calls the young Solzhenitsyn a "fire-breathing, extreme Communist."

"What got him into trouble," Scammell says, "was he was holier than the pope."

And so, Solzhenitsyn spent the next decade in prison, labor camps and internal exile in Kazakhstan. These ordeals would provide the material for his greatest works. The Cancer Ward was inspired by his own affliction with the disease, while still a prisoner. The First Circle drew on his internment at a scientific research station. It was there that Solzhenitsyn began to question not just Stalinism, but the entire Communist state founded by Lenin.

The atrocities he witnessed propelled him to write The Gulag Archipelago, three meticulously researched volumes that documented the torture, hunger and numbing cold suffered in a vast Soviet network of prisons and labor camps. Biographer Michael Scammell, and most critics, see this as Solzhenitsyn's masterwork. The title, Scammell notes, "turned a mealy-mouthed, bureaucratic, obscure term, describing the State Management of Labor Camps, that crazy little word 'Gulag,' into a metaphor almost on the scale of the Holocaust."

Solzhenitsyn had The Gulag Archipelago published abroad. It was smuggled back into the Soviet Union, reproduced and circulated underground. The horrors of the Soviet system were laid bare for the country and the world to see. This proved too much for the Soviet authorities, and in February of 1974, they put him on a plane for Frankfurt. He was later joined by his second wife and chief editor, Natalia Svetlova, and their young children. They settled into exile in Cavendish, Vt.

Just before his banishment, Solzhenitsyn penned an influential essay titled "Live Not By Lies," in which he counseled his countrymen to resist Soviet rule by refusing to take part in the falsehoods that propped up the system. "And the simplest and most accessible key to our self-neglected liberation lies right here: personal non-participation in lies."

He was a towering figure of moral strength. Then, in 1978, he shocked many admirers with the commencement speech he delivered at Harvard University. He thundered against the materialism of the West, its boundless freedom, its reliance on secular law, its spiritual and moral weakness.

Solzhenitsyn's speech in some ways presaged his reaction to the messy demise of his Soviet homeland. He was a bitter critic of the last Soviet president, Mikhail Gorbachev, and especially of Russian President Boris Yeltsin — the two men who broke the Communist Party's iron grip. Ironically for a former inmate of the Soviet labor camp system, Solzhenitsyn came to be on cordial terms with the ex-KGB officer Vladimir Putin. The writer is quoted in a 2007 interview with Der Spiegel as saying, "Putin inherited a country that had been looted and knocked off its feet. And he set about reviving it."

It was the collapse of Soviet rule, though, that allowed Solzhenitsyn to realize his dream of return. He flew first to Russia's Far East — the heartland of the Gulag Archipelago. As he stepped off the plane in 1994 in Magadan, in Siberia's frigid Kolyma region, Solzhenitsyn remembered the victims of the camps.

He told those assembled to welcome him: "I pay homage to the land of Kolyma where many hundreds of thousands, even millions of our murdered countrymen, are buried. The land where innocent martyrs rest has become sacred, and we will honor it as sacred."

After traveling across Russia, Solzhenitsyn settled in Moscow. He launched a biweekly television show, where he railed against the greed and corruption of post-Soviet Russia. Russian public TV canceled the broadcast because of poor ratings.

During his years in exile in Vermont, the author had plunged into a project he had conceived of as a young man — a project he saw as his most important work. It was a densely written series called The Red Wheel — more history than fiction — about the Russian Revolution period.

Few Russians would plow through The Red Wheel. What's more, critics said the work revealed a deep, anti-liberal bias. Some saw in it hints of anti-Semitism from the author, a Slavophile and extoller of village life in Orthodox Christian Russia. His last major work was a two-volume history of the Jews in Russia, which stirred hot debate but failed to win critical acclaim.

Russia seemed to have passed Solzhenitsyn by. His later political tracts sounded preachy and irrelevant compared with the early banned works that had kept Russians up late at night, furtively reading typed carbon copies. These are the works that have prompted biographers to compare the influence of Solzhenitsyn to that of Dostoevski and Tolstoy.

In some broadcasts, we said Solzhenitsyn "couldn't publish any more at home" after his book "One Day in the Life of Ivan Denisovich" came out. In fact, he did subsequently publish a few short works in the U.S.S.R.