Accessibility links
Planning A Purpose-Driven Talk With McCain, Obama John McCain and Barack Obama will make their first joint appearance of the post-primary season on Aug. 16 at a forum moderated by Rick Warren, the megachurch pastor and best-selling author. Warren talks to NPR about what he'll ask the candidates, both of whom he considers friends. 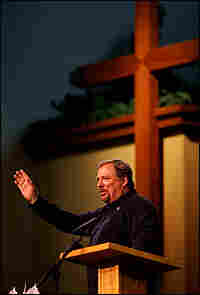 Though the campaigns for John McCain and Barack Obama continue to spar over what style of presidential debates to hold, they have agreed on the site of the candidates' first joint appearance of the post-primary season: a California megachurch.

Rick Warren, founder and pastor of the 22,000-member Saddleback Valley Community Church in Lake Forest, tells NPR that the presumptive nominees agreed to participate in a two-hour forum after he called each up personally.

The candidates will be introduced together at the Aug. 16 forum. But they'll take questions — the same questions — separately, for one hour each, from Warren, who is perhaps best-known as the best-selling author of The Purpose-Driven Life.

As for the purpose-driven forum, Warren tells NPR's Melissa Block that he hopes the candidates will address what he considers fundamental questions about the long-term direction of the country — such as their views on the U.S. Constitution.

"I have never heard anybody ask a candidate, 'What is your view of the Constitution?'" Warren says. "That will have far more impact on America's direction and future than 'What do you think the price of oil should be?'"

Warren tells NPR that while Obama and McCain are "exact opposites" in their personal traits and political views, he considers both to be his friends. He says he hopes the forum will allow them to address issues in a noncombative, "civil" manner.

Warren has led efforts to get the evangelical community more involved in the political process — and to have both Republicans and Democrats more actively address the concerns of religious communities.

The pastor spoke to NPR from Mexico City, where he is attending this year's International AIDS Conference as part of his ongoing efforts to involve the evangelical community in efforts to curb the epidemic. Below are excerpts from Warren's conversation with Block.

MELISSA BLOCK: We've heard both John McCain and Barack Obama speak many, many times before. What are you hoping to learn, and, as you think about your questions, what are you hoping to ask that might elicit some new information or some side of the candidates that we haven't seen before?

RICK WARREN: What I'm going to do is ask some questions that typically don't get answered. In a lot of the debates and town halls, the questions deal with hot-button, short-term issues like the war, the border, oil. The role of the presidency is far more important than simply managing the short-term problems. The role of the president, for instance, is to preserve, protect and defend the Constitution of the United States. And yet I have never heard anybody ask a candidate, "What is your view of the Constitution?" That will have far more impact on America's direction and future than "What do you think the price of oil should be?"

Well, they might be for me. It doesn't necessarily mean they're for everybody in the nation. I have my own convictions, but I also believe in the common good. I think that's part of democracy. You have a right to promote whatever view you hold, and you have a right to try to convince me that I ought to change my mind.

But would you be sending out that same list now in 2008?

I'm not going to send out any list this year, because I'm obviously maintaining neutrality in order to do what I think is best for America — and that is get these two guys to speak up in their own words. On a personal level, if I were sending out a letter today, my view hasn't changed one bit on any of those particular subjects. But my agenda has expanded dramatically over the last four years. And I think one of the things I've tried to do with evangelicals is to get them to not deny their pre-existing agenda but to expand it. I'm still pro-life, but I don't call myself pro-life anymore. What I do is call myself "whole-life." I'm not just in favor of the unborn baby. I'm in favor of her when she's born. Is she a crack baby? Is she an AIDS baby? Is she a baby living in poverty? Is she going to get an education? It's not just concern for protection of the unborn but for protection of the born, too.

It's interesting, because we've been hearing a lot this election cycle about evangelical voters who are not galvanizing around the Republican candidate, who are looking for an alternative candidate. Can you imagine Barack Obama cutting into the evangelical vote in a way that John Kerry and Al Gore did not?

One thing about Barack is he is very comfortable in using the language of faith. I see even a lot of people who disagree with Obama on issues who just say, "Wouldn't it be great to have an African-American president?" But I don't think you can really tell where people are going to vote when they get into the polls and they think, "OK, what are the issues that matter most to me?"

John is a Christian in the light of maybe a Gerald Ford, where he is not so comfortable talking about his faith. It's actually easier for his wife to talk about it than him.

Is that a problem for evangelical voters?

I don't think so. I think everybody has a father, an uncle or a brother who is kind of the silent type, who says, "I have a personal relationship with Christ, but I just don't wear it out on my sleeve. I don't talk about it that much." And I think a lot of people understand that.

Do you see any sort of split or division between older evangelical voters and the younger generation coming up in the issues that are of concern to them?

I don't see a split. I see an evolution. I'm spending almost all my time with the next generation of evangelicals. What I've seen is that they are broadening the agenda. But they're not dropping the agenda. That is the biggest myth and wish that some people would like to see happen, but it isn't happening.

Do you think that ultimately would translate to a shift at the ballot box?

I really don't know. If this were President Bush running for re-election against Obama, there might be people saying, "Oh, well, we need something new, because I think all of America is ready for change." But John McCain is not George Bush, so the crystal ball is just not clear.