Accessibility links
Remembering the Forgotten War NPR's series on the drug war began in a tiny Miskito Indian fishing village, on Nicaragua's Caribbean coast, that relies on cocaine for its livelihood. Such dependence, John Burnett writes, is a visceral reminder that nothing the U.S. does abroad will shut down the drug trade. 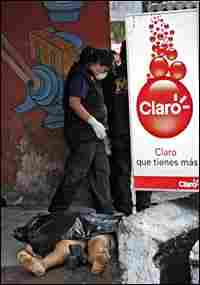 It was one of those epiphanies that journalists have, an "aha moment" that has informed much of my thinking about the war on drugs ever since.

Three years ago, I found myself in the tiny Miskito Indian village of Tasbaupani, on the Caribbean coast of Nicaragua, talking to a lobster fisherman.

He told me how the inhabitants of his town had become dependent for their livelihoods on the packages of cocaine that are spilled or dumped from traffickers' go-fast boats and then wash up on the beach. He told me how a network of spotters with satellite phones alerts the Colombian traffickers when the U.S. Coast Guard or the Nicaraguan Navy are in the vicinity. He told me how the school was considering using proceeds from cocaine sales to install a new roof. He told me how the police were paid off. He told me what they call their discoveries: "Catching the white lobster."

That's when I began to look at the drug war from the other end of the telescope. I began to read differently the prolific press releases from the Drug Enforcement Administration and Customs and Border Protection about all their record seizures. I began to wonder if the emperor had no clothes.

I realized at that moment, standing under a palm tree and staring out at the shimmering Caribbean, that nothing the United States does down here will ever shut down the drug trade. Or even dent it.

During research for "The Forgotten War" series, I had the good fortune to interview 15 former DEA agents—many more than I could fit into my reports. Because they were career federal agents, who had dedicated their lives to fighting the good fight in places like Colombia, Kuala Lumpur, Turkey, Germany and Guatemala, I guess I expected them to defend the current drug war. Few did. Most of them, to my surprise, said it's out of balance.

Larry Forletta, 21 years with the DEA: "We should hit demand reduction harder. It should be our top priority."

Mike Horn, 31 years with the DEA: "In the long run, prevention will have the most significant effect... Education has as much — if not a larger — role than law enforcement."

Old drug agents were eager to talk about the drug war, but it was harder to get members of Congress interested. They were all focused on the wars in Iraq and Afghanistan — and on their new Democratic majority.

"The senator doesn't have time for that now. He's really busy," said an aide to Vermont's Patrick Leahy when I asked for an interview. That's the way much of Washington sees the drug war these days – "don't bother me" — even though we found an open-air drug market four blocks from the dome of the capitol building.

As I travel around Latin America, however, evidence of the out-of-control drug trade is everywhere. In Guatemala, where murders of young women have reached epidemic levels, a well-informed friend told me that drug gangs in Guatemala City are thought to be behind the "femicides."

A savage drug turf war in Nuevo Laredo, Mexico, has shuttered tourist shops, driven wealthy residents across the river to Laredo, and scared away all applicants willing to serve as police chief in this violent city.

And back in Tasbaupani, Nicaragua, a town so isolated that there are no paved roads connecting it to the rest of the country, there are crack addicts.

All of this because of America's insatiable appetite for drugs.

The war on drugs may have fallen into obscurity in officialdom, but not where people live. As the father of three teenagers in Austin, Texas, I'm keenly aware that our schools are swimming in plentiful, cheap and potent narcotics, which have a devastating effect on young people and their families. In 2004, more than 31,000 people died of drug abuse in America.

"We've lulled ourselves into believing we've either won the drug war, or that somehow it really doesn't matter."

We haven't won. It does matter.