Accessibility links
'Bird's Nest' Ballads: Olympic National Anthems As medal-winners step up to the podium in this year's Summer Olympics, commentator Miles Hoffman says, we're bound to hear quite a few national anthems, some of which come equipped with bad poetry and stilted music.

United Kingdom of Great Britain and Northern Ireland: God Save the ... 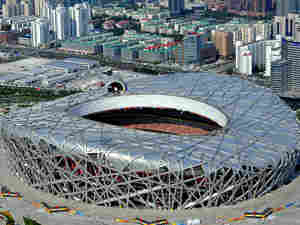 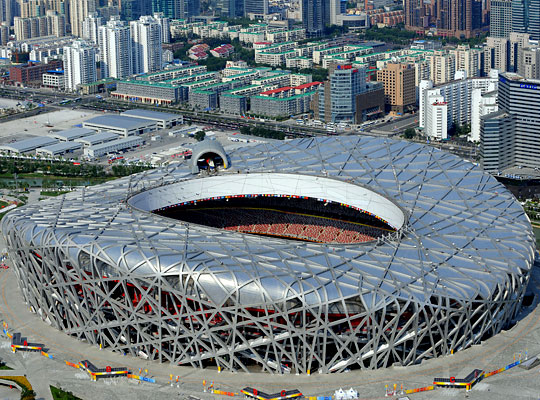 As the Summer Olympics unfold, plenty of national anthems will be heard in Beijing's National Stadium, known as the Bird's Nest.

As the Summer Olympics get under way in Beijing, a song called "The March of the Volunteers" is likely to be heard a time or two. It's China's national anthem. As winning athletes mount victory podiums in the new National Stadium (known as the Bird's Nest), many more national anthems will be played.

Commentator Miles Hoffman says the original idea for the national anthem isn't that old; it began in the 18th century, in Great Britain.

"The earliest national anthem, or national hymn, we know of is 'God Save the King,' " Hoffman says. "Nobody knows who wrote it, or when, but it was first used in 1745. People back then didn't think they needed national anthems. There had probably been more empires than nations, and we think of the movement of nationalism as something more associated with the 19th century."

China's anthem has something of a checkered history. The song became popular when it appeared in a patriotic movie from the mid-1930s. It became the national anthem with the birth, in 1949, of the People's Republic of China. But during the Cultural Revolution, it was banned, and its author, Tian Han, was jailed. The song was rehabilitated as the official anthem in 1978.

Hoffman says there are basically two categories of national anthems — the hymn, which usually has to do with "God save our country, or our ruler," and a type that's more martial and combative.

"The Chinese anthem falls into the latter category," Hoffman says. "The lyrics include the lines, 'Arise all who refuse to be slaves / Let our flesh and blood become our new great wall / Brave the enemy's fire, march on.' "

Other anthems that invoke violence include France's "La Marseillaise," a line of which calls out, "May an impure blood soak our furrows." On the other hand, Hoffman cites the Australian national anthem, "Advance Australia Fair," which he calls rather light and sweet, with lines such as, "Australians all let us rejoice / For we are young and free / We've golden soil and wealth for toil / Our home is girt by sea."

Hoffman notes that, in general, the poetry contained in many national anthems is pretty bad. The Spanish have skirted this problem by adopting a national anthem, "La Marcha Real," that has no words.

Musically speaking, Hoffman says, national anthems don't fare much better than their poetry, except for one notable tune.

"It's the only national anthem I know that's by a great composer," Hoffman says. "The German national anthem (originally the Austrian national anthem) was written by Joseph Haydn in 1797. It was originally called 'God Save Emperor Franz,' and it's a beautiful melody. Later, Haydn used the tune in one of his string quartets, which is known as the Emperor Quartet. But after WWII, the Germans had problems with the opening stanza, 'Deutschland, Deutschland Uber Alles' ("Germany above all else"). They kept the tune but started out with the third verse, 'Unity and law and freedom for the German fatherland.' "

One anthem not likely to be heard at this year's Summer Olympics, Hoffman says, is Monaco's. "I'm going to make a rash prediction that we are not going to see a lot of medals for the Principality of Monaco. Heaven knows, I could be wrong. But I'm just guessing that this is not an anthem that we are going to hear a lot from Beijing."