Accessibility links
Remembering Hollywood's Hays Code, 40 Years On For more than three decades, the code applied rigid moral scrutiny to films, banning everything from interracial dating to "lustful kissing." It died officially in 1968 — but in practice, it was always taking hits. 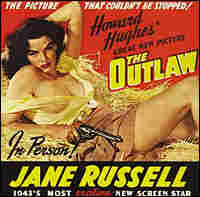 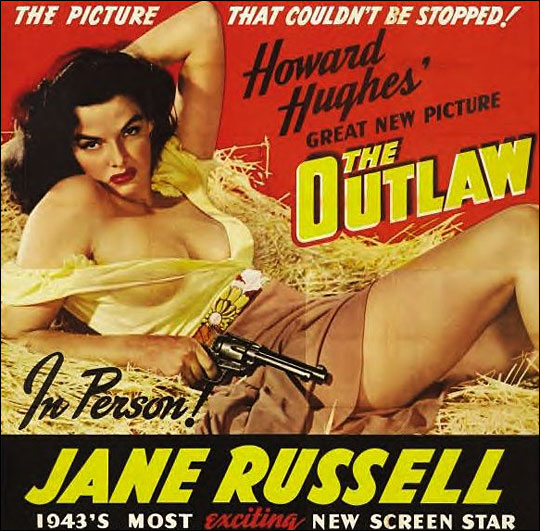 "The Picture That Couldn't Be Stopped": Jane Russell, perhaps the Hays Code's most notorious Outlaw. 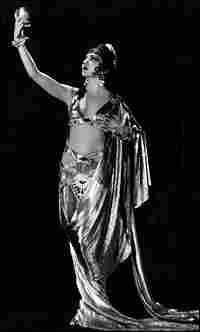 With its scantily clad actresses like Claudette Colbert, Cecil B. DeMille's pre-code epic The Sign of the Cross shocked audiences. When it was re-released 12 years later, a number of scenes were cut in order to comply with the Hays Code. Hulton Archive/Getty Images hide caption 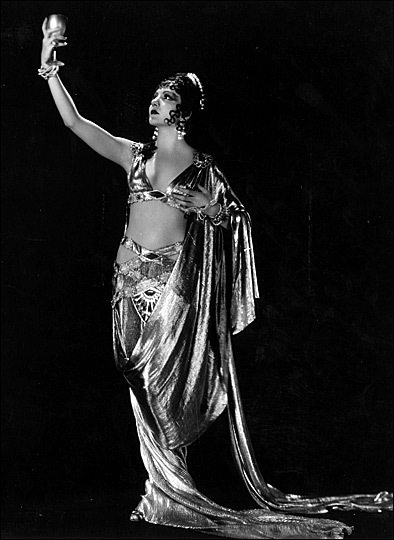 With its scantily clad actresses like Claudette Colbert, Cecil B. DeMille's pre-code epic The Sign of the Cross shocked audiences. When it was re-released 12 years later, a number of scenes were cut in order to comply with the Hays Code.

From film historian David P. Hayes, a complex Web interactive on the evolution of the Hollywood Production Code, complete with examples of cheats and violations:

The major principles governing the code from 1930 onward: 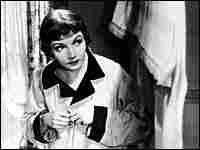 Released in 1934, It Happened One Night was among the first films to follow the Hays Code. No "scenes of passion" here; a bashful Colbert shields her body from Clark Gable's eyes with full pajamas and a blanket divider. Columbia Tristar/Getty Images hide caption 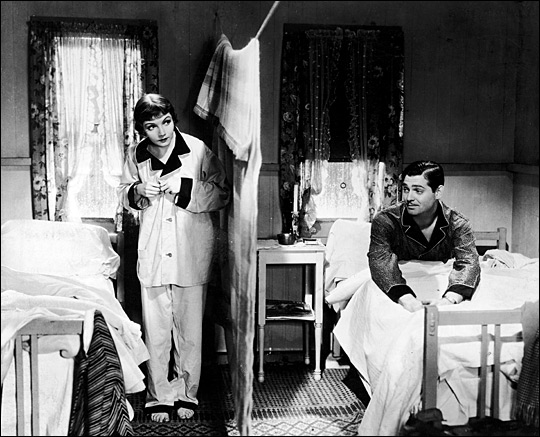 Released in 1934, It Happened One Night was among the first films to follow the Hays Code. No "scenes of passion" here; a bashful Colbert shields her body from Clark Gable's eyes with full pajamas and a blanket divider. 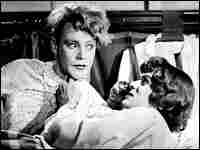 With its cross-dressing and homosexual pairings, Some Like It Hot was released in 1959 without a certificate of approval from the Production Code Administration. The Tony Curtis-Jack Lemmon comedy was an overwhelming success, weakening the authority of the code. Getty Images hide caption 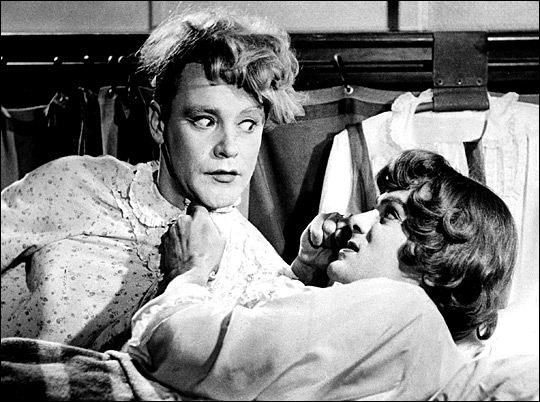 With its cross-dressing and homosexual pairings, Some Like It Hot was released in 1959 without a certificate of approval from the Production Code Administration. The Tony Curtis-Jack Lemmon comedy was an overwhelming success, weakening the authority of the code.

When people talk about the "more innocent" Hollywood of years gone by, they're referring to an era when the movie industry policed itself. But that early Hollywood wasn't always so innocent.

For decades, it's true, the major film studios were governed by a production code requiring that their pictures be "wholesome" and "moral" and encourage what the studios called "correct thinking."

But that code, which was officially abandoned 40 years ago this year, was the result of a nationwide backlash — an outraged reaction to a Hollywood that by 1922 had come to seem like a moral quagmire, even by the bathtub-gin-and-speakeasy standards of the Roaring '20s.

Silent-film comic Fatty Arbuckle charged with manslaughter in the death of an actress; a bisexual director found murdered; movie stars dying of drug overdoses — small wonder the nation's religious leaders were forming local censorship boards and chopping up movies every which way to suit the standards of their communities.

And at first, when Hollywood studios banded together under former Postmaster General Will Hays to come up with a list of 36 self-imposed "Don'ts and Be Carefuls," it's no wonder no one believed them. There were no penalties, no laws, no enforcement.

Moralists were so outraged, meanwhile — by Mae West's casual slatternliness in I'm No Angel, by Barbara Stanwyck's promiscuousness in Baby Face, by Cecil B. DeMille's racy biblical epic Sign of the Cross — that calls for official government censorship became overwhelming.

A Power Play,
For Propriety's Sake

Of course, they were calls that Hays himself, working behind the scenes, had helped to make overwhelming — and he used the pressure to force filmmakers to toe his line and obey the new Production Code he eventually promulgated.

"The code sets up high standards of performance for motion-picture producers," Hays proclaimed when the new code was unveiled. "It states the considerations which good taste and community value make necessary in this universal form of entertainment."

Among those considerations: that no picture should ever "lower the moral standards of those who see it" and that "the sympathy of the audience shall never be thrown to the side of crime, wrongdoing, evil or sin."

There was an updated, much-expanded list of "don'ts" and "be carefuls," with bans on nudity, suggestive dancing and lustful kissing.

The mocking of religion and the depiction of illegal drug use were prohibited, as were interracial romance, revenge plots and the showing of a crime method clearly enough that it might be imitated.

Of course, you couldn't really do most of Shakespeare under those strictures. But you could hang a blanket across a motel room in It Happened One Night, and let Clark Gable embarrass Claudette Colbert into sleeping on the other side — with a mock tutorial on "how a man undresses."

Colbert fled — she got an Oscar for fleeing, in fact — and propriety was upheld.

A 'Voluntary' Code
That Proved Mandatory

Now, the Production Code was voluntary for film companies, who figured it was a nifty way to avoid government censorship. But it was mandatory for filmmakers, if they wanted their films to play in American theaters.

And filmmakers didn't much care who was doing the censoring if their scripts were getting watered down. Howard Hughes threw a well-publicized fit when his western The Outlaw was kept out of theaters — not for its content alone but because the film's advertising focused attention on Jane Russell's cleavage.

Even cartoon characters had to beee-have: Betty Boop stopped being a flapper and started wearing a longer skirt. (This from the temptress who once teased audiences with the musical double-entendre of "Don't take my boop-boop-a-doop away.")

But the thing about community standards is that they change — and codes either don't change, or they change slowly.

And after World War II, with competition from TV on the family front, and from foreign films with nudity on the racy front, movie companies were less inclined to rein in filmmakers who couldn't wait for the rules to catch up.

The Catholic Legion of Decency notwithstanding, films about banned topics like drug addiction often made for intriguing, well-received movies: When Otto Preminger made The Man With the Golden Arm, featuring Frank Sinatra as an addict, he didn't get a seal of approval — but he did get good reviews, and enough theater bookings to make plenty of money.

When Sinatra received an Oscar nomination in 1955 — from the same Hollywood establishment that had refused to give the film he was in its seal of approval — it was clear that something was amiss. And attempts to make the code flexible? They just made it meaningless.

Pushing Boundaries In 'The Proper Frame of Reference'

By 1959, the man charged with enforcing the rules conceded that if a "moral conflict" provided "the proper frame of reference," a Code-approved film could deal with pretty much any topic but homosexuality.

Famous last words. What came up that year? Some Like It Hot, with Jack Lemmon and Tony Curtis, in drag, fending off male suitors. The film's plot was a veritable catalog of once-forbidden topics — gambling and racketeering to get the plot going, a booze-swilling Marilyn Monroe to keep it going.

When Monroe's Sugar Kane Kowalczyk climbed into a train berth with Jack Lemmon's "Daphne," there was no longer a hanging blanket to separate them — and when Sugar's breathless, dingbat recollections of bedtime games with her sister inspired a strangled, hormonal snort from Lemmon — the code was dead, whether Hollywood admitted it or not. And judging from attendance at the nation's theaters, it was not much missed.

A year after Some Like It Hot was released, the head of the MPA began suggesting that some sort of classification system might work better than a censorship system that no one was paying attention to. In 1968, his organization finally shifted from restricting filmmakers to alerting audiences, using the film-ratings system we know today.

How's that approach been working out? It took all of one year for an X-rated movie to win an Oscar for Best Picture — Midnight Cowboy, which violated more "don'ts" and "be-carefuls" than it observed.

And it took just two years after that for Midnight Cowboy to be re-rated from X to R, without a single frame being altered. Community standards had changed — as they invariably do.

In a passage referring to 'The Man With the Golden Arm,' the broadcast version of this story inaccurately conflated the movie-industry body that administered the Hays Code with the Academy of Motion Picture Arts and Sciences, which bestows the annual Academy Awards. The text version of the story has been amended.