Accessibility links
The Joy Of Being At The Game: Priceless? Now, going to a game is an event — like a Broadway show or a concert. You must plan in advance, budget. If you're a fan, I don't have to tell you the figures.

Listen
The Joy Of Being At The Game: Priceless? 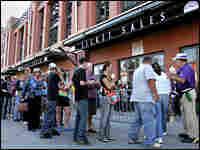 Fans line up for the chance to see a one-game playoff between the San Diego Padres and the Colorado Rockies, Sept. 30, 2007. Doug Pensinger/Getty Images hide caption

Sometimes the simplest responses are the most telling. For example, all you need to know about how athletes have changed comes down to one word. It used to be that a player would say he wanted to win the pennant. Now he says he wants to win a ring. "Pennant" means team, "ring" means me.

But then, how do you explain how attendance at sports events continues to rise, even as the price of admission goes up and the economy goes down? All I know is that the whole sports spectator equation has changed. It used to be that going to see a game was often spontaneous, rather akin to going to the movies: "Hey, let's go down to the ballpark tonight."

Now, going to a game is an event — like a Broadway show or a concert. You must plan in advance, budget. If you're a fan, I don't have to tell you the figures. The so-called Fan Cost Index — what Dad has to pay to take Mom and the two kids out to a baseball game — is almost $200 now. And some prices make the Metropolitan Opera look like a bowling alley.

Next season, Los Angeles Lakers courtside seats will go for $2,500 a piece. Excuse me — is any game worth 2,500 simoleons? But then, you might even have to buy a seat license. For the new Dallas Cowboys stadium, your cheapest license — understand now, that's buying a ticket so you are allowed to buy a ticket — is $2,000 for the season. It tops out at $150,000. And so on.

The amazing thing about expensive sports attendance is that, most often, you can stay home and watch the game for free instead.

There are, I believe, a couple other reasons why the stadiums and arenas are filled.

First, there's the Grateful Dead hypothesis. When all the other music geniuses were trying to make money off records and CDs, the Dead said, "Come on out and see us live and, it's OK, go ahead, tape us making music."

Like that, in an iPod world increasingly individualized, sports means getting together and sharing. Remember, Katie Casey didn't just say, "Take me out to the ballgame." Just as important was: "Take me out with the crowd." Sports fans are — well, they're athletic Deadheads.

I also think that sports' popularity can be explained because it is the anti-technology. All the digital glitz of Batman and Grand Theft Auto and flat-screen HDTV are fine, and Lord knows they're doing well enough. But I think some primeval entertainment instinct remains within. We want to see real human beings doing real unpredictable things, live and proficiently, before our very eyes.

And, in a cold, digital world, we'll pay the price.