Accessibility links
Honduras Embraces Genetically Modified Crops Many Third World countries have banned genetically modified crops, but Honduras is encouraging farmers to plant them in response to the global food crisis. The trend could extend to other countries, too, if it's proven to make a difference in farmers' lives. 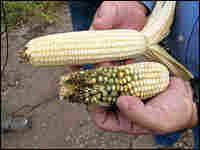 The ear of genetically engineered corn at top contains a toxin that kills worms. Honduran farmers who grow conventional corn usually spray their crops to kill worms. If they don't, the corn may end up looking like the damaged ear. Joshua Eley-McClain for NPR hide caption 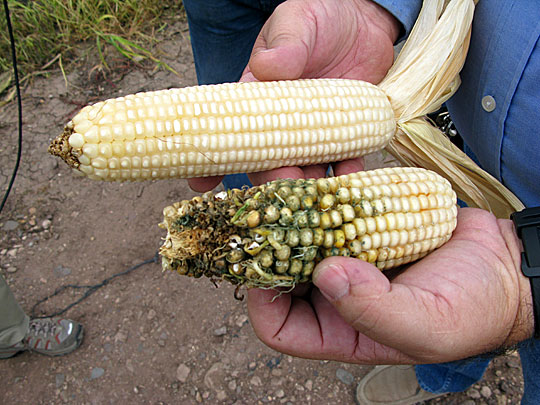 The ear of genetically engineered corn at top contains a toxin that kills worms. Honduran farmers who grow conventional corn usually spray their crops to kill worms. If they don't, the corn may end up looking like the damaged ear. 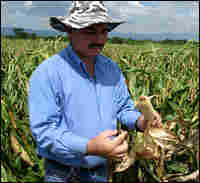 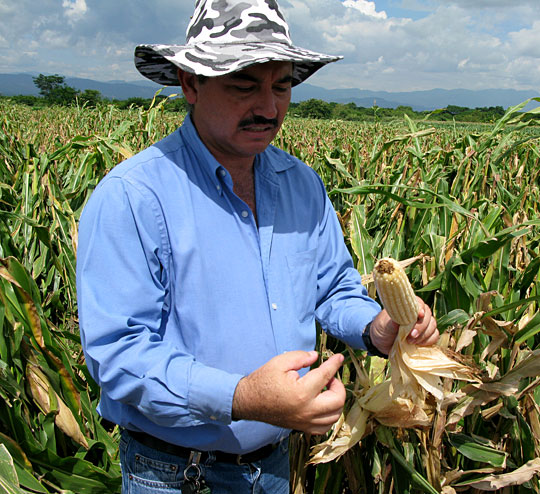 Rodolfo Rubio shows off an ear of genetically engineered corn. Rubio grows corn and vegetables on his farm near Comayagua, Honduras. 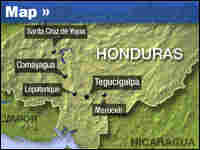 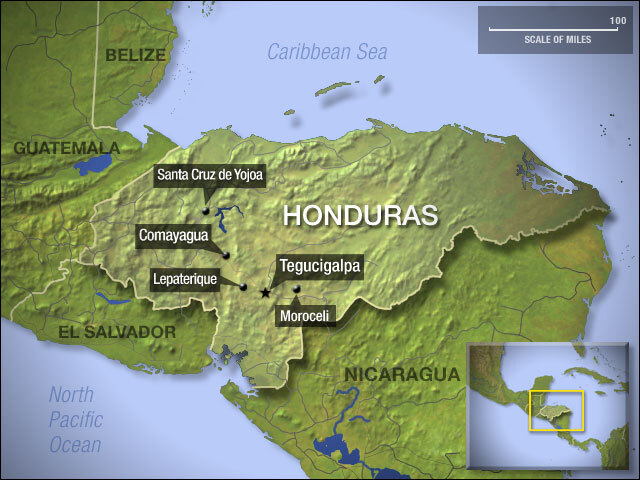 As governments search for solutions to the global food crisis, some are taking a second look at a controversial technology: genetic engineering.

Many Third World countries have banned genetically modified crops. But Honduras now is encouraging farmers to plant them.

Rodolfo Rubio, who grows corn and vegetables on about 50 acres near the city of Comayagua, needs no convincing. He's an evangelist for the virtues of genetically altered corn.

He pulls the husk from one ear and shows off the gleaming rows of white kernels. There are no worms in this corn, which is remarkable, because such worms are everywhere in this part of Honduras and Rubio hasn't sprayed any insecticides.

"No, the only thing we need here is the seed, the fertilizer and the herbicide," he says.

The secret is in the corn itself. Years ago, scientists at the company Monsanto took a gene from a kind of worm-killing bacteria and inserted it into an ancestor of these corn plants. So if worms start munching on the corn, they die.

Rubio lifts up a leaf on another corn plant and points to another kind of insect hiding underneath.

"This is a beneficial insect that eats the worms," he explains. "They're safer on this land, because there aren't any insecticide residues here."

Rubio started growing Monsanto's genetically modified corn four years ago. He pays about $1,000 extra for enough corn seed for 30 acres. But this technology saves him so much time and money, he says, he can't imagine not using it.

"If someone tells me that the government wants to limit my access to technology, that's like telling me that I don't have the right to a better life, or more profits, and that it wants to see me sink into poverty," he says.

But in the rest of Central America, growing this corn is against the law.

Corn is more than a crop here; it's history and culture. Central America is where farmers first grew corn, thousands of years ago, and in some places you can still find an almost infinite variety of corn plants.

"When you come with a genetically modified variety, genes cross with other varieties, and what you have is contamination," she says. "You have a strange gene in those varieties. They are not what was they were before."

Then came the food crisis. Corn doubled in price. And earlier this summer, Hernandez said that he now wants farmers to plant more corn, including genetically modified corn.

Robert Paarlberg, a professor at Wellesley College and author of Starved for Science: How Biotechnology Is Being Kept Out of Africa, says concern over food shortages may be shifting government policies in other countries, too.

"Egypt has gone ahead and approved GMO corn; China has just announced a large increase in its research budget for GMO foods," Paarlberg says.

But according to Paarlberg, these are only small, isolated shifts. Genetic engineering still isn't welcome across much of Latin America, Asia and especially Africa.

"It's been criminalized," he says.

Paarlberg wants that to change, because he believes genetic engineering can help even poor farmers in developing countries.

Monsanto agrees, and it has big plans in Honduras. Rita Perdomo, a marketing manager for the company based in St. Louis, Mo., says the amount of genetically modified corn in Honduras increased by 50 percent this year. She admits that this is still only 15 percent of the country's corn crop, but she expects that percentage to grow substantially. By 2012, she predicts, almost half of all the corn planted in Honduras will be genetically engineered. She believes Honduras' production of corn, per acre, will double or even triple — and will allow the country to become self-sufficient in corn for its tortillas and animal feed.

Others scoff at this prediction. Most farmers in Honduras, they point out, are too poor to spend much money on expensive corn seed or anything else that would boost their production, including fertilizer or irrigation.

Even the skeptics, though, are watching events in Honduras carefully, looking for evidence that First World biotechnology can make a difference in the lives of Third World farmers.