Web designer Sean Tevis has raised more than $96,000 from nearly 6,000 people — most of whom aren't from Kansas — in his bid to unseat Kansas state Rep. Arlen Siegfried. Kami Brady hide caption 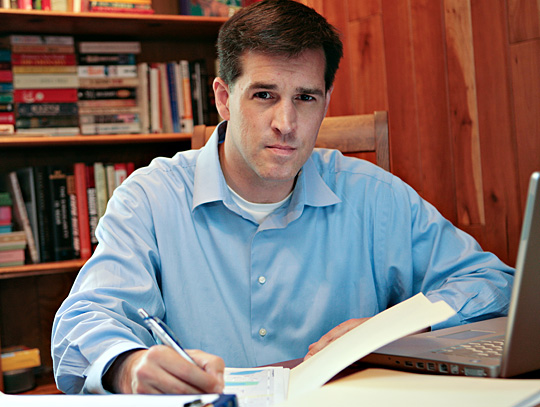 Web designer Sean Tevis has raised more than $96,000 from nearly 6,000 people — most of whom aren't from Kansas — in his bid to unseat Kansas state Rep. Arlen Siegfried.

A panel from Sean Tevis' cartoon "Running for Office: It's Like a Flamewar with a Forum Troll, but with an Eventual Winner." Sean Tevis hide caption

Democratic strategists in Kansas told first-time political candidate Sean Tevis earlier this summer that he would need at least $26,000 to have a shot at beating a Republican incumbent. So Tevis pounded the pavement, but after two weeks of knocking on doors, he had collected only $25 — and two dog bites.

So he put his skill running corporate Web sites to work and posted online a stick-figure comic strip he drew that served as his fundraising appeal. The cartoon went live July 16, and in a week and a half, it paid off. Big time.

Called "Running for Office: It's Like a Flamewar with a Forum Troll, but with an Eventual Winner," the comic is filled with nerdy Internet inside jokes.

"To most people [the title is] gobbledygook," Tevis says. (It's geek-speak for how politicians fling insults at each other during campaigns.)

The comic is drawn in a style similar to a popular Web-based cartoon called XKCD and uses terms like downmodding (which is when a user in a community publishing site votes to lower another post's popularity) and to the online phenomenon Rickrolling.

"That's where you put a link somewhere and you say, 'Hey, go see this cool thing because it's really neat!' You click on the link, and instead of finding what you were expecting, suddenly you're redirected to a video of the singer Rick Astley singing, 'Never Gonna Give You Up,'" Tevis says.

But the cartoon is more than just jokes. It's the story of a first-time candidate who has unwittingly blazed fundraising trails.

In the comic, a bearded stick figure representing a political adviser tells Tevis that raising $26,000 is easy.

Tevis breaks it down a bit further: 3,000 people, $8.34 a piece with an appeal to the Internet masses. The calculation takes into account the $1,000 he figured he could raise.

"In less than four hours, my server crashed because I was getting 8 to 10 people a second [visiting] that Web page. And I was astonished," he says.

He put the site back up and hit his fundraising goal in less than a day.

In the week and a half before his first campaign finance report was due late last month, he'd done something unprecedented in raising more than $96,000 from nearly 6,000 people, many of whom do not live in Kansas. Tevis says that about 90 percent of his donations came from out-of-state contributors through PayPal.

"There's no way I want to compete with that," Siegfried says.

Siegfried says he expects to raise around $35,000, and despite recent knee surgery, he plans to do most of his campaigning the old-fashioned way — door to door.

"I will start it on crutches if I have to, because it has to start here pretty soon," he says.

Siegfried gets much of his money from businesses and lobbyists, but he's updated his Web site so people can pledge online.

Both candidates join a long list of political hopefuls trying to use the Internet to rake in money for their campaign. Joseph Aistrup, who heads the political science department at Kansas State University, says that while others have had success soliciting money online, he hasn't seen anything like Tevis' efforts.

"His appeal and the way in which he did it was particularly 21st century. So, he is on the cutting edge of a different way to raise money for your campaign," Aistrup says.

And for Tevis, nearly $100,000 means he's gone from being the Democratic underdog in a mostly Republican district to trying to figure out how to win the race and not disappoint his online fans.