Accessibility links
What's The Best Remedy For A Bad Sunburn? Though your first instinct may be to apply aloe vera, dermatologist Paula Moskowitz has another suggestion, and it's something you're likely to have around the house.

Listen
What's The Best Remedy For A Bad Sunburn? 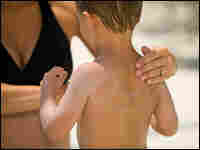 A woman applies sunscreen to a boy's back. Dermatologists recommend using a broad-spectrum sunscreen with an SPF of 15 or higher to protect against the sun. iStockphoto.com hide caption 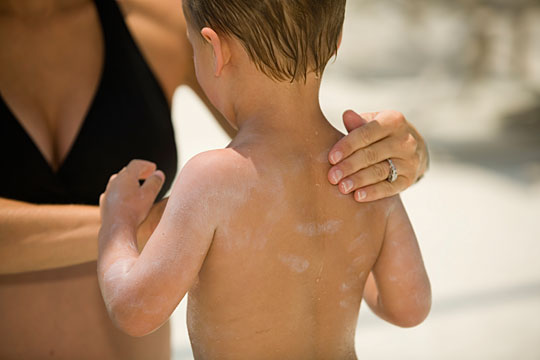 A woman applies sunscreen to a boy's back. Dermatologists recommend using a broad-spectrum sunscreen with an SPF of 15 or higher to protect against the sun.

• Stay in the shade.

• Use a broad-spectrum sunscreen with an SPF of 15 or higher. Reapply often.

• Wear a hat and sunglasses.

• Wear loose, lightweight long-sleeved shirts and long pants or skirts when in the sun for long periods of time.

A few months ago, 10-year-old Autry got such a bad sunburn at a Los Angeles area pool that she couldn't sleep at night.

"I was laying on my back and my mom put pillows all around me, but I couldn't lay on my side, because it would hurt my shoulders and my face," she says, adding that she looked like "a pink pruny person."

Sunburns can be tough to avoid in the summertime. But if we do get burned, what's the best treatment?

Autry's mother, Christi Hayden Wilson, says the first thing she did was to apply an aloe vera ointment, but that didn't work. It made Autry's burn hurt more.

But the best remedy, Moskowitz says, is the one Hayden Wilson tried after reading about it in a family medical guide from the American Academy of Pediatrics.

"The funny thing is what it did suggest to do fell right in line with my mom's catch-all remedy when we were growing up in Texas: She would always use a wet washcloth. It'll cure anything," Hayden Wilson says. "I like to joke you could be having an appendicitis attack or ... passing a kidney stone and she would run for the wet washcloth."

Moskowitz says applying a wet washcloth is probably one of the best things you can do. "I don't think it's the cure for everything, but certainly for sunburn, it feels good," she says.

She advises against using ice, which could injure the skin even more, and says taking ibuprofen is a good idea. It's an anti-inflammatory that can reduce that burning feeling.

Moskowitz says once you have a burn, you've already damaged the skin cells.

"They look very sickly, they're kinda shriveled, they're not operating normally. They almost look as if they're on the road to cell death," she says. "So your body attempts to repair these after a sunburn event, and your body generally does a fairly good job of repairing these cells, but the body isn't perfect."

The body sometimes makes mistakes, she says. Those mistakes can build up over time and lead to precancerous cells and cancer.

The American Academy of Dermatology recommends a broad-spectrum sunscreen to protect against the sun — with an SPF of 15 or higher. And the association reminds people to reapply sunscreen every few hours.