Accessibility links
Cheek: Darfur Work May Have Led To Revoked Visa China has revoked the visa of former Olympic speedskater Joey Cheek. Though he was given no explanation, Cheek says he suspects his Darfur-related activism may have prompted the move. He runs Team Darfur, which highlights the violence in the region.

Listen
Cheek: Darfur Work May Have Led To Revoked Visa

Cheek: Darfur Work May Have Led To Revoked Visa

China has revoked the visa of former Olympic speedskater Joey Cheek. Though he was given no explanation, Cheek says he suspects his Darfur-related activism may have prompted the move. He runs Team Darfur, which highlights the violence in the region.

If everything had gone according to plan, Olympic gold medalist Joey Cheek would be on an airplane right now headed for Beijing. But yesterday, the retired speed skater received a phone call from the Chinese visa office here, telling him his visa was revoked. Cheek is co-founder of Team Darfur, a group of athletes working to raise awareness of the crisis in the Darfur region of Sudan and the Chinese government's support for that regime.

You may remember that in 2006, he donated his Olympic bonus money to help refugees from Darfur. And Joey Cheek joins me now in our studios. Welcome.

Mr. JOEY CHEEK (Co-Founder, Team Darfur): Melissa, thanks for having me.

BLOCK: Why do you think your visa was revoked? What explanation were you given?

Mr. CHEEK: Well, actually, I was given no explanation. When I asked for an explanation, I was informed that there was no explanation needed, that they could revoke at any time for any reason. And so I never received any actual reason. I'm certain - I mean, it was my efforts as part of Team Darfur, and at times I'd been, you know, critical of, you know, the role that China has played in supporting Sudan, and I think that they can do a much better role.

BLOCK: You have been quite outspoken on that. You wrote an op-ed back in May calling China the genocidal regime's key defender at the United Nations. Do you think that did get you in trouble?

Mr. CHEEK: It's entirely possible. You know, I think in addition to my having my visa revoked, we started to hear reports from athletes who have been involved with Team Darfur and were getting calls from their national Olympic committees who have been approached by other Chinese government officials, and basically telling them if they were a part of Team Darfur that they would be viewed as suspect individuals going into the Beijing Games. We had athletes from several different countries repeat a very similar story.

BLOCK: Does that include athletes from the U.S.?

Mr. CHEEK: It does not include athletes from the U.S. It includes athletes from countries that I think China has much, much greater influence over.

BLOCK: What were your plans for Beijing? Had you planned to be speaking out on this issue?

Mr. CHEEK: Well, Team Darfur has 72 athletes competing in Beijing, and so my role as I saw it was I would be there to support any athletes in whatever role they may need me. And then the other role was as an Olympic alumnus. We are - I was invited to speak at a panel discussion on Olympism and conflict resolution. I was going to speak - my intention were to speak with U.N. ambassadors, with IOC members if possible.

Now, I certainly wouldn't shy away from saying I think that the role of the Olympics and the role that the Chinese government can play especially in Darfur I think has been - has been not served. However, I didn't have any protest plan, and in fact before the games even started, we told every athlete traveling to Beijing, you know, don't bring any Team Darfur gear or wristbands or paraphernalia because the IOC forbids you from wearing it.

BLOCK: Well, it's interesting because you mentioned the role that Olympics can play, but they are supposed to be apolitical, right? I mean, you're expressly told that as Olympic athletes.

And I think that's some of the case here. I think when we talk about the crisis in Darfur, we talk about the millions of innocent people that are suffering there, and we talk about the positive role that China could play should they choose to, and the rest of the international community; I mean these people have been failed, I think, at every level.

BLOCK: I understand that one of the members of Team Darfur - this is Lopez Lomong…

BLOCK: …has been chosen to carry the American flag during opening ceremonies.

Mr. CHEEK: I just heard that. Yeah. It's just amazing. His story, his story - he was an athlete from South Sudan, was kidnapped and fled, lived in a refugee camp, finally made his way through a program for refugees to the U.S.

BLOCK: He's one of the so-called Lost Boys of Sudan.

Mr. CHEEK: He was one of the Lost Boys of Sudan - makes his way to the U.S. and makes the U.S. Olympic team in track and field. And when I heard that the U.S. team had selected him - the way that works, the captains from all of the teams get together and nominate and then choose the flag bearer.

You know, it just encapsulates, I think, the feeling I've had about Olympians all along, and U.S. Olympians in particular, that we truly do care about the world and we care about people. And this particular example is just one more. I mean, imagine how many more of Lopez's stories are living every day in these camps and in internally displaced refugee camps in Darfur and Chad right now.

BLOCK: Joey Cheek, thanks for coming in.

Mr. CHEEK: Thanks for having me.

BLOCK: Joey Cheek won gold and silver medals in speed skating at the 2006 Winter Olympics. He's a co-founder of Team Darfur. We contacted the Chinese Embassy here in Washington for comment on why Cheek's visa was revoked. We haven't yet received a response. 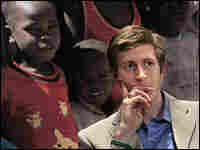 In front of a photograph of children from Darfur, Olympic gold medalist Joey Cheek participates in a 2006 news conference about the genocide in Sudan's Darfur region, in Washington, D.C. hide caption 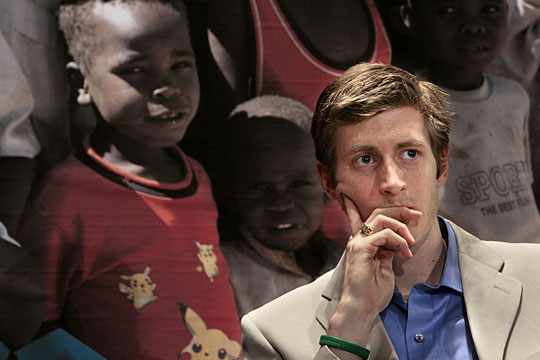 In front of a photograph of children from Darfur, Olympic gold medalist Joey Cheek participates in a 2006 news conference about the genocide in Sudan's Darfur region, in Washington, D.C.

Cheek is the co-founder of Team Darfur, a Washington D.C.-based group of athletes hoping to raise awareness about the crisis in Darfur. Al Bello/Getty Images hide caption 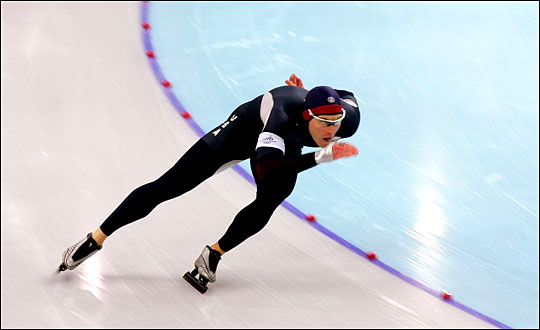 Cheek is the co-founder of Team Darfur, a Washington D.C.-based group of athletes hoping to raise awareness about the crisis in Darfur.

Politics At The Olympics

1936: Adolf Hitler, who was amassing power, used the Summer Olympics in Berlin to demonstrate German might.

1968: Tommie Smith and John Carlos, medalists in the 200-meter race, raised black-power fists during the playing of "The Star-Spangled Banner" at the Mexico City games.

1972: During the Olympics in Munich, Germany, 11 Israeli athletes were abducted and killed by Palestinian terrorists who demanded the release of 234 prisoners in Israeli jails.

1976: More than two dozen African countries pulled out of the Summer Olympics in Montreal because New Zealand's rugby team was allowed to participate. New Zealand had played in South Africa, despite apartheid. Canada did not recognize Taiwan as part of the Republic of China or allow its athletes to compete.

1980: In the aftermath of the Soviet Union's invasion of Afghanistan, the United States and more than 60 other countries boycotted the Summer Olympics in Moscow.

1984: In response to the U.S. boycott of the 1980 games, the Soviet Union, Cuba, East Germany and 11 other countries refused to participate in the Summer Olympics in Los Angeles.

The Olympic Games are inextricably intertwined with global politics.

A clear reminder came on Wednesday, when the Chinese government revoked the visa of former Olympic speedskater Joey Cheek. Cheek is the co-founder of Team Darfur, a Washington D.C.-based group of athletes hoping to raise awareness about the crisis in the war-ravaged Darfur section of Sudan.

Cheek has been outspoken about his concern that China might squelch political protest surrounding the games. But he was surprised by the rescinding of his visa.

"I didn't see it coming," Cheek told the Associated Press. "I figured once they gave me a visa, I wouldn't imagine they wouldn't allow me to come in later. That was a big shock. I wasn't expecting to get a call the evening before I was leaving for Beijing."

Cheek planned to spend a couple of weeks in China, says Team Darfur spokeswoman Martha Bixby. He received a visa on July 1, but he learned it was revoked "less than 24 hours before he was to leave," she says. "The Chinese said they weren't required to give a reason."

So many athletes "are drawn to this issue," Bixby says, referring to Darfur. "To me, this fits in with the Olympics, which are about the world coming together for the betterment of mankind."

Team Darfur also supports an Olympic truce, which calls for a pause in conflicts around the world during the games. Such a moment, Bixby says, might be an opportunity for resolutions.

Cheek, who won the gold for the U.S. in 2006, launched the nonprofit organization with UCLA water polo player Brad Greiner in the summer of 2007. There are more than 390 members, and some 72 athletes competing in the Olympics and Paralympics have signed the group's charter.

Greiner was told that there are problems with his visa, Bixby says, and he was going to the Chinese consulate in New York to meet with officials Wednesday morning.

At the White House, press secretary Dana Perino said the U.S. government would protest the decision by the Chinese.

Since 2003, more than 200,000 people died and 2.5 million were displaced in the war-weary western Sudanese region. Protesters around the world — athletes and non-athletes — have argued that China's trade policies in Sudan ignore basic human rights issues.

When asked for comment about Cheek's visa, the Chinese Embassy directed an NPR reporter to the press counselor. The press officer did not answer his phone and his voice mailbox was full.

China also has denied a visa to Kendra Zanotto, a 2004 bronze medalist in synchronized swimming, Bixby says. Zanotto, an American, was planning to go to the games as a freelance journalist.

In an interview with Melissa Block on All Things Considered Wednesday, Cheek said that he "didn't have any protest planned" during his time in China and he told athletes not to wear any Team Darfur gear because it was against the rules.

The Olympics, he said, "have a role in mitigating conflict."

"I was quite surprised I got the visa in the first place," he said. "The whole incident seemed kind of bizarre to me."

In one poignant turn of events, track team member Lopez Lomong — one of the so-called "Lost Boys of Sudan" and a member of Team Darfur — was chosen by the U.S. Olympic team captains in China to carry the U.S. flag at the opening ceremony.