Accessibility links
Drawing The Line On Political Protest At The Games China has done much to quell dissenting voices ahead of and during the Olympics, and many are not pleased. Some petitioners have been sent out of Beijing, and designated "protest zones" will be hard to use, some say.

Listen
Drawing The Line On Political Protest At The Games 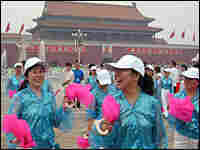 Government-selected cheerleaders line the streets in Tiananmen Square in Beijing for the arrival of the Olympic Torch on Aug. 6, 2008. Anthony Kuhn/NPR hide caption 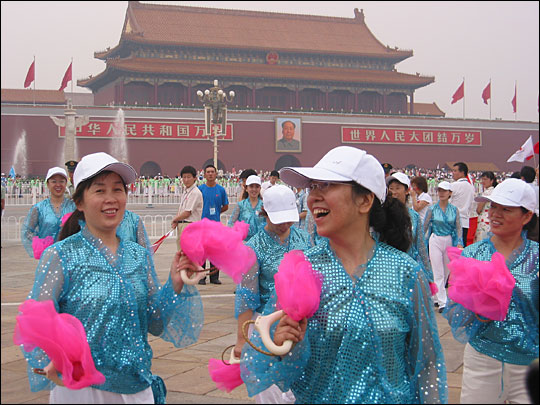 Government-selected cheerleaders line the streets in Tiananmen Square in Beijing for the arrival of the Olympic Torch on Aug. 6, 2008.

Beijing was outwardly colorful and festive as the Olympic Torch made its way through Tiananmen Square on Wednesday and atop the Great Wall on Thursday.

Government-vetted crowds shouted officially approved cheers, as phalanxes of riot police stood at the ready in the underground passageways leading to Tiananmen Square.

On television at least, China portrays itself as radiating strength and confidence.

"Openness and tolerance are the signs of a nation's greatness and power," says Bai Yansong, a presenter on an Olympic-themed show on China Central Television.

Many dissenting voices in China have already been silenced, and authorities continue to sweep the capital, hunting for petitioners who come to protest injustice out in the provinces.

Huang Fengdeng, a 57-year-old petitioner, said he had just been detained and was being held in a local government liaison office in Beijing, from where he would be sent back to his home in southwest Chongqing city.

"I was told I could come back here in November, but that petitioning was not allowed in Beijing during the Olympics," Huang said. "Many petitioners have been sent home already. The Olympics were originally going to be a good thing, but the government has used it to create fear and further violate people's human rights."

The liaison office denied that it was holding any petitioners.

Some, but not all, human rights activists are either under house arrest or were forced to leave Beijing during the Olympics.

Police initially ordered human rights lawyer Li Baiguang out of town during the games, but then told him he could come back this week. Li says it might have something to do with his two meetings with President Bush, the most recent in June.

"After visiting the White House," Li says, "I feel there's been a change in my own personal safety. I can tell from what the police told me. 'You're an old friend of President Bush's,' they said, 'You're entitled to VIP treatment.' So they deal with different people in different ways."

Beijing can point to several recent measures as proof of increased openness. It has loosened restrictions on foreign journalists, lifted blocks on some overseas Web sites and designated Olympic protest zones in public parks.

But critics dismiss these as half measures. Many Web sites remain censored, and foreign journalists often face harassment. Political commentator Zhang Zuhua notes that anyone who wants to make use of the protest zones has to apply five days in advance.

"They never approve the applications," Zhang says. "Since the protest and demonstration law was passed in 1989, they've only approved two protests in all of China, and they've limited them to fewer than 20 people. It's really a joke."

Zhang himself is currently under house arrest.

"Their aim is to display the power of the one-party dictatorship," Bao says. "It's to say: 'A dictatorship can be prosperous and stable. We can make dissenting voices disappear. Poor people? We erect a wall and nobody can see them. Dissenting voices? We ban reporting on them. And if someone does report, then we say it's a trivial matter. There's your harmony.' "

Bao says the government's objectives are limited. He recalls that when Beijing first applied to host the games in 1993, it was still suffering from the aftermath of the 1989 Tiananmen Square massacre.

Bao points out that Beijing has a lot to dazzle visitors, from ancient culture to newly acquired wealth. It can claim to have spent the most money on any Olympic Games yet. But Beijing's silencing of dissent, Bao says, means there's one often-stated goal it can't reach: to host the best Olympic games ever.