Accessibility links
8-8-08, A Lucky Day For Weddings The lucky number eight means wealth and prosperity to Asians who observe Chinese numerology. So when the Chinese government was scheduling the start of the Olympics, they chose the most auspicious time of all: 8-8-08 at 8:08:08 p.m. We visit Wayfarers Chapel, a popular wedding site in Palos Verdes, Calif., to see how they're dealing with the rush of couples.

The lucky number eight means wealth and prosperity to Asians who observe Chinese numerology. So when the Chinese government was scheduling the start of the Olympics, they chose the most auspicious time of all: 8-8-08 at 8:08:08 p.m. We visit Wayfarers Chapel, a popular wedding site in Palos Verdes, Calif., to see how they're dealing with the rush of couples. 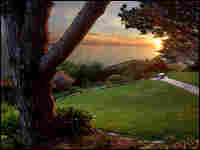 On Friday, 8-8-08, seven couples will be getting married at this spot in Palos Verdes, Calif. Courtesy Wayfarers Chapel hide caption

This is Day to Day. I'm Madeleine Brand.

I'm Alex Chadwick. That anxiety cloud hanging over Beijing today is not just about getting every last detail ready for the Olympics. It's wedding anxiety in China and many other places, too.

KI-MIN SUNG: Hordes of couples flock to Las Vegas to get married on the most recent lucky day. And local media was there to cover it.

Unidentified Woman #1: An estimated 3,000 couples from around the world will try to maximize their wedding luck on 7-7-7.

Unidentified Woman #2: We are booked 24 hours solid. Like, every chapel is booked.

Unidentified Man: It's crazy. This is the biggest wedding day ever.

SUNG: That's how the Chinese see it, according to Tai Chin (ph) who teaches Mandarin at the University of California, Los Angeles.

SUNG: I'll get to the other lucky numbers later. But first, eight. Why is eight the new seven?

SUNG: In China, there's a frenzy over the date with eights. The Olympics opening ceremonies not only start on 8-8-08, the opening ceremonies begin at 8:08 p.m., eight seconds after the minute. News reports say pregnant women are aiming to deliver their babies that day to maximize the child's good luck and prosperity. Some couples are even scheduling caesarean sections.

As for the soon-to-be-betrothed, there was a jump in marriage-license applications in Beijing for couples planning to marry on 8-8-08, and save-the- date notices for Friday were sent out in other Asian countries where couples observe Chinese numerology. Here in the States, wedding chapels are bracing.

SUNG: One of the most popular sites to wed in southern California is Wayfarers Chapel in Palos Verdes. About 500 couples marry here every year. The chapel is made of glass and redwood and was designed by the son of Frank Lloyd Wright. It has panoramic views of the Pacific Ocean from the bluff top, where it sits. Their schedule tomorrow?

SUNG: That's Reverend Jonathan Mitchell. Wayfarers has more than doubled the usual number of ceremonies for a summer Friday.

Reverend MITCHELL: Our understanding is that in many Asian cultures, eight is a lucky number, so it's not surprising that we've got seven weddings on that day.

SUNG: And his first couple to wed?

Reverend MITCHELL: I haven't met that couple yet. I understand they're coming from Japan to be married here. And over the years, it's been a very popular place for couples from Japan to get married.

SUNG: One couple that managed to book the chapel for Friday is Amy Leano (ph) and Damian Serano (ph), who are of Asian and Spanish heritage. When they called a year ago to schedule an 8-8-08 ceremony, they were disappointed.

Ms. AMY LEONO: There was only one more spot that was actually on hold, but a couple wasn't sure if they wanted to do it, and so we were on a wait list for the 12 o'clock ceremony. And they also said, or you can have our 8 a.m. ceremony.

Mr. DAMIAN SERANO: But we didn't know if anyone would be up that early.

SUNG: But then the noon slot opened up, and the couple got it. Thanks to luck? Well, for anyone who missed out on lucky number eight, it's not too late. Again, UCLA instructor Tai Chin.

Professor CHIN: The other two lucky numbers are number 6. That's pronounced leo and this sounds a little like lu. Leo and lu. Lu in Chinese is good luck in your career.

SUNG: But June 6 is so two years ago.

Professor CHIN: The other one is nine. Nine is pronounced jo, and that's exactly the same as long time or eternity. Jo. 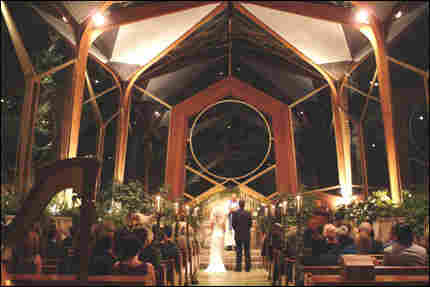 Wayfarers Chapel in Palos Verdes was designed by Lloyd Wright, Frank Lloyd Wright's son. Couples from as far as Japan will be marrying there on the lucky day, 8-08-08. hide caption