Accessibility links
Candidates Share Interest In Boosting Foreign Aid Both John McCain and Barack Obama have said assistance to poor nations is essential for the United States' image abroad. The development community has jumped on their enthusiasm and is hoping to convince the next president to rethink how foreign aid is delivered. 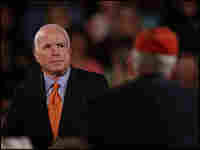 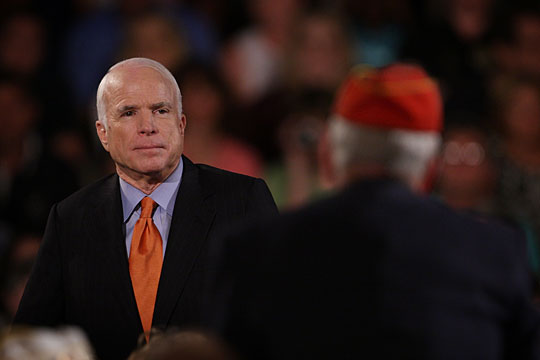 John McCain takes a question at a town-hall style meeting in Racine, Wis., last month. McCain has said he sees foreign assistance as a key factor in securing America.

McCain says he sees foreign assistance as a key factor in securing America. He sees aid as a tool to help eliminate poverty, HIV/AIDS and other conditions that he says make people look toward extremism.

McCain has also set a goal of eradicating malaria in Africa and fighting corruption.

Obama says aid is a strategic imperative for the U.S. and that it's the country's best investment for increasing security.

He wants to double foreign assistance to $50 billion by 2012. The money would go toward sustainable growth in Africa, to halve global poverty and to roll back disease.

The economy may be in trouble and the budget deficit growing, but supporters of U.S. foreign aid see some promising times ahead. That's because both leading candidates for president have talked about the need to continue to help poor nations develop.

Every so often at town hall meetings on the campaign trail, Republican John McCain calls on people from a grassroots organization known as the ONE campaign. They ask him what he'll do to help poor nations fight HIV/AIDS, malaria and illiteracy. McCain has said he sees foreign assistance as a key factor in securing America.

"It really needs to eliminate many of the breeding grounds for extremism, which is poverty, which is HIV/AIDS, which is all of these terrible conditions that make people totally dissatisfied and then look to extremism, particularly Islamic extremism," he told a town hall meeting in New Hampshire last month.

At a speech in Washington this summer, Democrat Barack Obama also spoke about development aid as a strategic imperative for the U.S. in today's world.

"I know development assistance is not the most popular of programs, but as president, I will make the case to the American people that it can be our best investment in increasing the common security of the entire world and increasing our own security," he said. "That's why I will double our foreign assistance to $50 billion by 2012 and use it to support a stable future in failing states and sustainable growth in Africa, to halve global poverty and to roll back disease."

McCain has not been that specific about how much money he would spend, but he has set a goal of trying to eradicate malaria in Africa and fight corruption.

Steve Radelet of the Center for Global Development sees a total change in Washington's attitude about development aid, and he's hoping this will translate into some real reform.

"The way we are organized to deliver foreign assistance and to invest in low-income countries is really quite behind the times," he said. "Our apparatus was set up in the early '60s — the legislation is the Foreign Assistance Act of 1961, passed in the early days of the Kennedy administration."

The center put together a video to show how development needs have changed, noting that when Kennedy signed the act, it was meant to provide military assistance to countries on the "rim of the communist world," and that the act "just won't do" for the 21st century.

There have been many studies on ways to update U.S. foreign-assistance programs and better coordinate them. A study Radelet was a part of shows that there are too many government agencies with a hand in this — the departments of State, Treasury and Agriculture, and a weak U.S. Agency for International Development. He wants to see a much stronger, independent USAID and a Cabinet-level official in charge of development. He's been trying to make the case to both the Obama and McCain campaigns.

"They have both hinted at the need for reorganization, but neither has been particularly explicit as to what that reorganization might look like — appropriately so," Radelet said. "It's a little early to be into the specific details of what the reorganization might be, but both have recognized the importance of making investments going forward."

The next president will likely build on some of what President Bush did — dramatically increasing spending on the fight against HIV/AIDS and malaria, and setting up a program to invest in countries that are reforming. Gayle Smith of the Center for American Progress says the problem is that these efforts are all, as she put it, stove-piped — and leave many gaps.

So the pitch she, Radelet and others will be making to the next president is to rethink how the U.S. government is organized to aid poor nations around the world. And she says she thinks there is a constituency for this.