Accessibility links
Staats & Shafer On Mountain Stage The celebrated West Virginia-based pickers have individually won multiple awards for their work with their respective instruments. As a unit, they've recorded several albums together. They break out their mandolin and guitar for a duo performance. 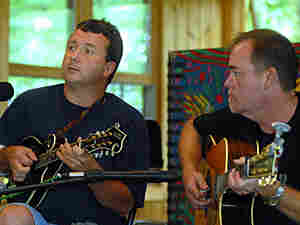 Mandolin player Johnny Staats and guitar flatpicker Robert Shafer are two of West Virginia's most decorated pickers. They've both appeared separately on the Grand Ole Opry, and both have won multiple awards for their work on their respective instruments.

The duo has recorded numerous CDs together, including their latest collection of hymns: Homecoming Favorites. Though they can be classified as bluegrass players, Staats and Shafer draw from influences far beyond the boundaries of bluegrass.

The set begins with a frenzied Staats composition, incorporates their gospel influences, and finishes with works by both Bill Monroe and Mozart, two of Staats' most prominent influences.