Accessibility links
Anthrax Suspect's Abortion Stance Eyed As Motive Bruce Ivins may have targeted Sens. Tom Daschle and Patrick Leahy with anthrax-laced letters in 2001 because he saw them as bad Catholics owing to their pro-choice votes, officials close to the investigation say.

A letter addressed to Sen. Patrick Leahy in 2001 contained anthrax. A similar letter was sent to Tom Daschle, who was the Senate majority leader. Getty Images hide caption 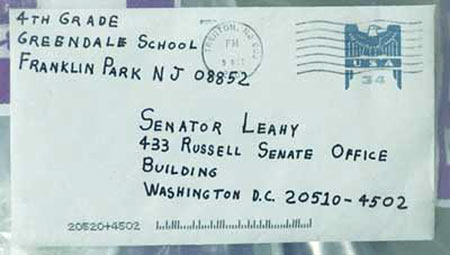 A letter addressed to Sen. Patrick Leahy in 2001 contained anthrax. A similar letter was sent to Tom Daschle, who was the Senate majority leader.

Bruce Ivins may have targeted Sens. Tom Daschle and Patrick Leahy with anthrax-laced letters in 2001 because he saw them as bad Catholics owing to their votes in favor of abortion rights, officials close to the investigation say.

A day after the FBI effectively closed one of its longest and most complicated investigations in a decade, more detail about Ivins is beginning to dribble out. Ivins had been working at an Army lab in Maryland, and among the projects he was working on was a patented anthrax vaccine.

There was some speculation that Ivins had targeted Daschle and Leahy because he saw them as holding up funding that would have helped pay for his research into an anthrax vaccine. Now, officials close to the investigation say another possible motive could have been that Ivins saw the senators as bad Catholics because of their votes in favor of abortion rights.

In an unusual presentation Wednesday, the Justice Department went public with evidence it says shows that Ivins was the man behind the anthrax mailings that killed five people and sickened 17 others. Ivins committed suicide last month, so there will be no trial to prove their allegations and no opportunity for Ivins to defend himself.

Ivins and his wife were both practicing Catholics, and their children had attended and graduated from a Catholic high school in Frederick, Md. His wife, Diane Ivins, according to an e-mail Ivins wrote in 2002, was president of the Frederick County Right to Life, and the couple had connections to many other anti-abortion groups. In a July 10, 2002, e-mail cited in the affidavit, Ivins wrote: "I'm not pro-abortion, I'm pro-life, but I want my position to be one consistent with a Christian."

In 2001, the Catholic anti-abortion movement was openly critical of Catholic members of Congress who voted in support of abortion rights for women. Two of the more prominent lawmakers who fell into this category were Daschle and Leahy. The Ivins affidavit mentions an article in the September/October 2001 issue of the Right to Life of Greater Cincinnati newsletter that singled out Daschle, Leahy and Sens. Edward Kennedy and Joseph Biden for criticism because of their abortion rights votes.

The article was part of a longer dispatch by the leader of the Netherlands-based International Right to Life, Dr. John Wilke. The small article, titled "Pro-Abortion Catholic Senators?", ended with: "We should stop labeling these men Catholic, for anyone who directly aids abets or gets an abortion, by Catholic teaching, excommunicates themselves."

The affidavit stops short of saying that Ivins read the article. But officials close to the case say the newsletter was found in a search of his home. Given his longstanding connection to Cincinnati (he attended college there), his wife's role in the Frederick Right to Life Chapter, and his own beliefs about abortion, it is not implausible to have found the article in Ivins' home. Officials close to the case said that they believe Ivins' right-to-life fervor was at least part of the reason he would target Daschle and Leahy.

Officials also said Ivins did a great deal of mailing under pseudonyms and from various cities other than his hometown of Frederick. Much of that letter traffic involved anti-abortion or Right to Life activities, they said.

Ivins' lawyer, Paul Kemp, told NPR that attributing a new motive to Ivins was hogwash. He says the FBI is just floating a new theory and can't prove that Ivins was so passionate about his anti-abortion beliefs.

"They questioned him about that," Kemp told NPR. "And he denied that had ever been something that he was ardently involved with."

Also on Thursday, the government explained why it had seized two computers from a Maryland public library last week. Officials believe Ivins used the computers three days before he committed suicide. On the evening of July 24, FBI agents watched Ivins go into the library and use the two computers. According to newly issued search warrants, Ivins reviewed a Web site dedicated to the anthrax investigation and checked his e-mail. The FBI quickly seized those computers, and now a judge has given investigators permission to search them. A special agent said the search could turn up a suicide note or other writings.

The search warrants are part of what the FBI has called "loose ends" officials need to tie up before they formally close the anthrax investigation. They have outstanding search warrants and leads to follow up, they said.