Accessibility links
Olympians, Others Practice Whitewater On Potomac Slalom kayaking is not only about the force of the water. Perfecting a paddling technique is also a key ingredient. And practicing on calm, safe water, like the Potomac River Feeder Canal, is a training strategy for many.

Olympians, Others Practice Whitewater On Potomac

Olympians, Others Practice Whitewater On Potomac 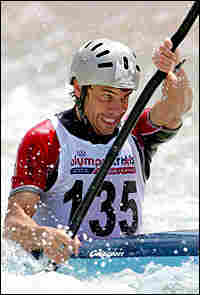 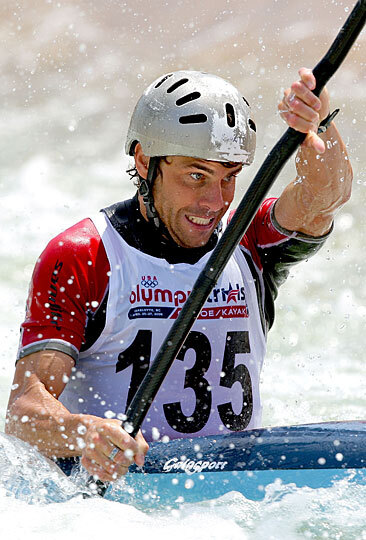 Kayaker Scott Parsons competes in the K1 event during the Olympic team trials for whitewater slalom at the U.S. National Whitewater Center April 26, 2008, in Charlotte, N.C.

Slalom kayaking is not only about the force of the water. Perfecting a paddling technique is also a key ingredient.

And practicing on calm, safe water is a training strategy for many.

U.S. Olympic slalom kayaker Scott Parsons has spent many hours working on his technique on the Potomac River.

Soon after graduating from high school, Parsons left home in Ohio and settled in a basement apartment in a Washington, D.C., suburb. He lives a short walk from an area of the Potomac known by locals as the Feeder Canal.

For decades, the Feeder Canal has been a place where kayak enthusiasts have learned the sport of whitewater slalom. Many who train there have made it to the Olympics.

Parsons is in Beijing competing in his second Olympic Games. And former Olympian Davey Hearn also started out in whitewater slalom at the Feeder Canal. He competed in three Olympics — 1992, 1996 and 2000.

"The nice thing about this Feeder Canal training site is that it's fairly easy whitewater, but we set up the gates, and then we have a very difficult, what you would call a Class IV or even a Class V path defined by the gates on water that is Class II," Hearn says.

The international scale of river difficulty runs from Class I, the easiest, to Class VI, which is almost deadly. And while a Class II might be considered easy whitewater, it is still strong enough to flip a boat. But the consequences of getting hurt are minor, which is why on any given day — and almost all year round — kayakers of all ages gather at the Feeder Canal to practice slalom racing.

In the upcoming days, they'll all be watching one of their own, as Scott Parsons goes for the gold at one of the most challenging whitewater courses in the world.