Accessibility links
My Jewish Grandpa's Triumph At Hitler's Olympics Reporter Carrie Kahn grew up thinking that her Jewish grandfather, Sam Balter, had proudly marched before Hitler in 1936 as part of the first-ever Olympic basketball team. Though his gold medal is real, the truth, she'd learn, was slightly different.

Sam Balter was the captain of the UCLA basketball team in 1929. This photograph appeared in the student newspaper. The accompanying article proclaimed that "he was the only Jewish man ever honored with a major sport captaincy and one of the few Jewish athletic leaders in the country." Balter-Kahn Family Collection hide caption 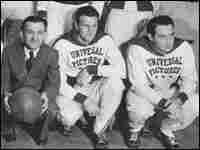 Click enlarge to see full team. In 1936, professional basketball leagues did not exist. Amateur teams were sponsored by big companies such as Universal Pictures. From left: Jack Pierce, the manager of the team, Duane Swanson and Sam Balter. Balter-Kahn Family Collection hide caption 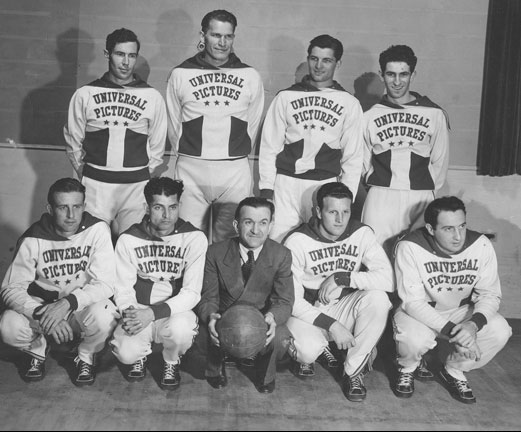 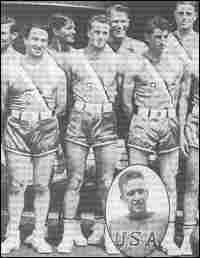 Click enlarge to see full team. Sam Balter was the only Jew on the U.S. Olympic basketball team. As a rationale for playing in "Hitler's Olympics," he says if he hadn't, it would have been a "propaganda team." hide caption 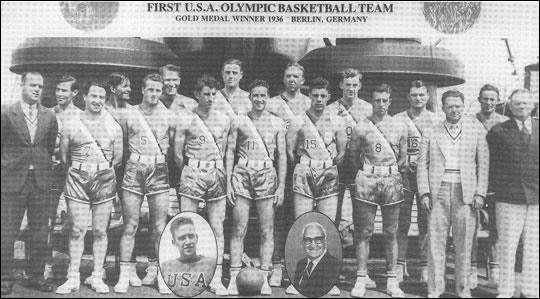 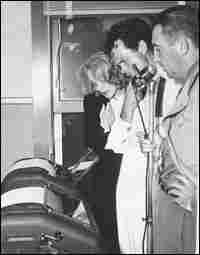 After the Olympics, Sam Balter (front) developed a successful career as a sports broadcaster. Here, he reads the newscast on Victory Over Japan Day, 1945. Beside him are legendary film director Orson Welles and actress Marlene Dietrich. Otto Rothschild hide caption 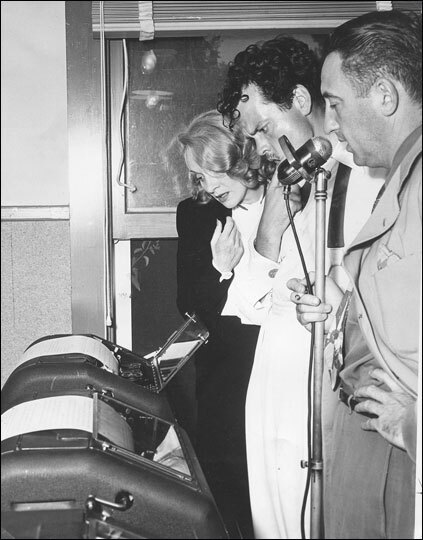 After the Olympics, Sam Balter (front) developed a successful career as a sports broadcaster. Here, he reads the newscast on Victory Over Japan Day, 1945. Beside him are legendary film director Orson Welles and actress Marlene Dietrich.

When I was a reporter in San Diego, I was sent to cover a traveling exhibit called the Nazi Olympics. The name referred to the 1936 summer games in Berlin.

Toward the end of the exhibit, a life-size photograph of the United States' gold-medal-winning basketball team halted me in my tracks. My eyes grew teary.

"Do you know someone in the photo?" another reporter asked me.

I proudly pointed to the shortest man, "Yeah, that's my grandfather."

I told him what I remembered hearing as a child: My grandfather Sam Balter, a proud Jew, wouldn't let anything stop him from competing in the Berlin games. At age 26, he marched in front of Adolf Hitler and flaunted his gold medal to the world.

The other reporter wrote an article in San Diego's Jewish newspaper about the Nazi Olympics that mentioned my grandfather's story. When it was published, I sent it to my mom. She called me laughing, "That's not exactly the way it happened."

The story, as with all my grandfather's tales, wasn't quite supported by the facts.

Eleven years before he died, my mother sat down with my grandfather — then in his late 70s — and recorded his life story on tape. It wasn't hard to get him to open up, as the Olympic athlete turned sports broadcaster liked to hear himself talk.

I listened to those tapes recently. They had that old cassette hiss sound to them, but my grandfather's voice was as strong and erudite as ever. And while nobody other than my mom was probably ever going to listen to the recordings, Patoo, as we called him, occasionally seemed to address an imaginary audience.

"I was among the first seven chosen in the team. I wouldn't pretend that I was one of the seven best basketball players in America," my grandfather says on the first tape. "But the method of selection at that time somehow placed me on the team."

In 1936 — more than a decade before the debut of pro basketball — amateur teams were sponsored by big companies and had their loyal fan bases. My grandfather's Southern California-based team was sponsored by the Universal Pictures movie studio.

The team made it to the qualifying round for the Olympics, and the game was riveting — at least the way my grandfather always told it. With the entire crowd at Madison Square Garden on their feet, Patoo's team beat their longtime rivals, the Oilers of McPherson, Kan., 44 to 43.

A reporter came up to him after the game, he recalls on the tape.

"He singled me out. I couldn't figure that out because I wasn't the big star of the game. And he asked me if I was going to go to the Olympics. Well I laughed and said, 'Of course, why not?' "

My grandfather continues, "The reporter said, 'You know they're being held in Hitler's Germany?' "

The only Jew on the American team, he confessed. "Ohhhhh. I just had never given it a moment's thought."

To Play Or Not To Play

After a long silence, Patoo says he asked the reporter to strike his cavalier response and then spent three months agonizing over what to do. Some Jewish groups pressured him to boycott the games.

"I was told by others that it was absolutely imperative that I play," he says. "But more important, what kind of propaganda team would it be if ... there were no Jews on the American team?"

U.S. Olympic Committee President Avery Brundage assured the athletes that the games would be free of Nazi propaganda. That appeared to have given my grandfather an opening. He said the once-in-a-lifetime chance to be an Olympian beat out any other competing loyalties.

In July of 1936, he boarded the ocean liner Manhattan and left New York harbor for Berlin.

It wasn't long, Patoo says, before he worried he had made a mistake. Despite the promise that Hitler wouldn't use the games for his Nazi cause, propaganda brochures were handed out daily at the Olympic village, and anti-Semitic magazines were sold on most street corners.

"The magazine has caricatures of hooked-nosed people, and it lays the blame for everything on the Jews," my grandfather says. He said he got a sense of how bad the situation had become, "but not obviously as bad as it got later on."

During the games, Patoo said he was thrilled to get the chance to meet James Naismith, who invented basketball in 1891. Naismith proudly watched his sport's debut in the '36 Olympics. But the Germans didn't seem to grasp the game and scheduled all the basketball competitions on outdoor dirt courts.

The final between U.S. and Canada was played during a torrential rainstorm.

"If you dribbled, it was a splash and it floated away," recalls Patoo. By halftime, the score was only 15 to 4.

"These two teams supposedly consisting of the best in the world, and each scored only four points in the second half."

What Patoo leaves out, but later tells my mom for the first time, is that he didn't play in that final game. The U.S. team actually consisted of two seven-man squads, and they alternated games.

"It wasn't our turn. It was the turn of the other group," he haltingly admits. "We didn't get medals until much later. Oh, we had a lot of beefs by the end of the games."

My mom cuts in, "It was quite an inauspicious ending."

That's an understatement. Not only did Patoo not march before Hitler, as I had always imagined. He actually got his gold medal — not on a podium in front of the world — but out of his mailbox in Los Angeles.

My grandfather always said the 1936 Olympics was the biggest achievement of his life.

"It's the dream of all sportsmen to make an Olympic team and win a gold medal. That's what is on your epitaph. When they write your obit, it's going to say 'an Olympic games participant.' I guess I was smart enough to know that all the time."

The experience helped launch his career as a successful Los Angeles radio — and later TV — sportscaster. He also dabbled in acting and played a sportscaster in several movies, including the boxing classic Champion, starring Kirk Douglas.

My grandfather died at the age of 88. And as he predicted, in the first paragraph of his obituary in the Los Angeles Times, he was remembered as a "gold medal Olympian."

Throughout his life, my grandfather kept 24 volumes of scrapbooks. He cut out almost every newspaper clipping with his name in it. I cut out that L.A. Times obituary for him. I covered it in plastic, and when I went to say my final goodbyes, I placed it next to him in his coffin.