Accessibility links
'Phantom Of The Opera': 20 Years In The Pit Broadway's Phantom of the Opera has been running like clockwork, eight times per week since 1988. Some of the pit musicians, who have been there since day one, describe what it's like to play the same notes for 20 years.

Listen
'Phantom Of The Opera': 20 Years In The Pit

Phantom of the Opera: "All I Ask of You"

recorded at the Majestic Theatre 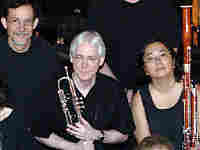 Lowell Hershey (center) has played trumpet in the Phantom of the Opera orchestra since the musical opened on Broadway in 1988. Ben Strothmann hide caption 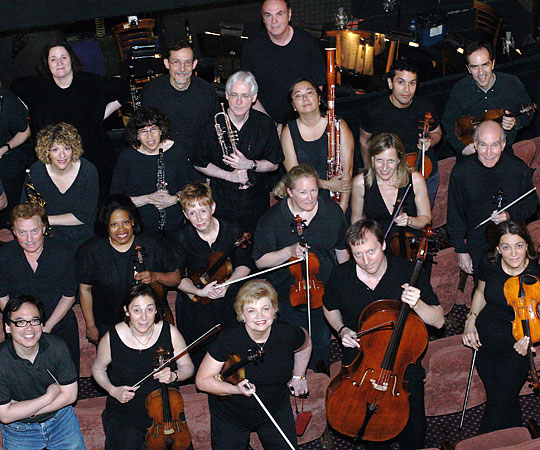 A majority of the musicians that comprise the current Phantom of the Opera pit orchestra. 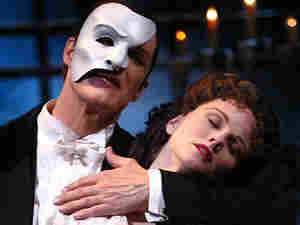 Howard McGillin (as the Phantom) and Jennifer Hope Wills (as Christine) share a moment in Phantom of the Opera, Broadway's longest-running musical. Joan Marcus hide caption 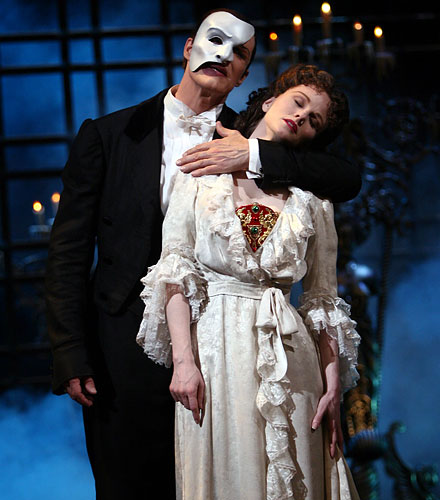 Howard McGillin (as the Phantom) and Jennifer Hope Wills (as Christine) share a moment in Phantom of the Opera, Broadway's longest-running musical.

The Phantom of the Opera is the longest-running musical on Broadway, ever. It surpassed Cats more than two years ago, when it reached its 7,486th performance.

Andrew Lloyd Webber's show, about a disfigured genius who operates from the bowels of an opera house, still plays eight times a week at the Majestic Theatre, on West 44th Street, where it opened in 1988. The pit orchestra is still playing the same notes, night after night.

Sarah Brightman and the other original stars of Phantom of the Opera are long gone. But in the orchestra pit, things are different. Thirteen musicians in the orchestra have been on the job since day one.

Trumpeter Lowell Hershey and French-horn player Peter Reit are original members. They've been down in the pit for more than 20 years. They've had their parts memorized for 19 of them.

"I think for a lot of us," Reit says, "we don't want songs running through heads outside the show. We don't want to be waking up in the morning and by mistake start singing Phantom of the Opera in the shower. And I've never had that."

The same can't be said of Hershey.

"When the show started, the melodies were constantly going through my head," Hershey recalls. "And I would wake up in the middle of the night and hear some tunes. My son loved the music so much, it was playing on the radio every time I came home. I had to ask him not to play it. But then, after a few weeks, I got to the point where if somebody asked me to sing something from the show, I couldn't do it. Somehow, my brain just repressed it."

Harpist Henry Fanelli has been playing in Phantom since opening night: Jan. 26, 1988. As he plucks a few notes, warming up in the pit before performance number 8,490, he says he still gets a little anxious.

"I've always had nightmares of not being able to get to the theatre, being stuck somewhere, or harp breaks," he says. "I have those anxiety dreams all the time."

And, as far as playing the same music every night goes, Fanelli says he's learned to appreciate the small things. "Playing music and listening to music is not exactly the same thing," he says. "It's a wonderfully written harp part. There's one little chord I have. The audience would never know the difference, but there are nights where I arpeggiate the chord exactly right. There are places all through the show where I really am satisfied if I play it the way I like to play it."

Twenty-seven players squeeze into the pit for each show. For stretches when they're not playing, Hershey and the other musicians carry along books, crosswords and Sudoku.

"Because I've done it for so long," Hershey says, "I know in my body when I'm supposed to be playing. When I'm not playing, I read books, I study languages, and when I pick up the instrument again — it's a little like Tourette's syndrome — I drop the book and blat out a few notes on trumpet, and pick up the book again."

With a show that has run this long, every mistake that's possible to make has been made. Hershey says that his personal worst was tooting a loud note, entering a bar before everyone else.

Many things can go wrong; it's even part of the plot. The Phantom causes a one-ton chandelier to crash to the stage, at which point a stagehand character gets strung up from the rafters, dead.

For most of the Phantom's pit musicians, the Majestic Theatre hasn't been a dangerous workplace. But Hershey does recall a certain hair emergency.

"There was a moment with the pyrotechnics — there's a flash when Phantom disappears, and a spark from the explosion went and landed in the hair of the oboist. She was uninjured, but there was some damage to her hair, which the hair department took care of. They're experts in that field."

That kind of excitement is rare. Mostly, the Phantom runs like a clock. Eight shows a week. Twenty years. The notes never change.