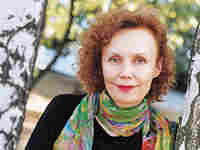 More From the Festival

More From The Principals

Peter Sellars recites and explains a quote by Simone Weil.

Dawn Upshaw on her role in the oratorio. 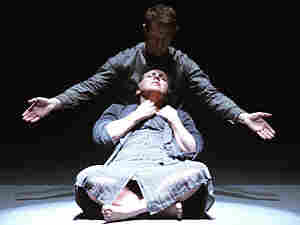 Lincoln Center's Mostly Mozart Festival has been a summer fixture in New York for more than four decades. Mozart's music still resides at the festival's core, but in recent years, the programming has broadened to include contemporary work. Now, the festival has even added a composer-in-residence: Kaija Saariaho. The Finnish composer is shaking it up this year with an oratorio about a French philosopher, sung by an American soprano.

Saariaho's work is called La Passion de Simone, an oratorio for soprano, chorus and orchestra, which explores the life and work of 20th-century French philosopher Simone Weil. The piece is broken into 15 stations (like the stations of the cross) of Weil's life. It premiered in Vienna in 2006 as part of the New Crowned Hope Festival — a festival of new work in honor of Mozart's 250th birthday. The iconoclastic director Peter Sellars started the festival and directed the premiere. He will also direct the New York premiere at Mostly Mozart next Wednesday.

La Passion de Simone is a kind of requiem for Simone Weil, a controversial figure who led an ascetic, lonely, politically committed life. Her philosophical tracts were published posthumously, after she starved herself to death at age 34 in solidarity with prisoners in Nazi concentration camps. Saariaho says Weil and her struggles made for fascinating subject material: "She was trying so hard to solve some of the problems of our existence," Saariaho says. "She tried so hard to live up to what she was expecting of human beings, how they should live. And the life was so impossibly complicated for her, that all this ... It just touched me very much."

At Mostly Mozart, American soprano Dawn Upshaw (for whom Saariaho wrote the role) will be the soloist, who functions as a narrator, describing moments from Weil's life and questioning her human failings. Upshaw says she's struggled to make sense of Weil's philosophy, which is quoted extensively in voiceovers. "The ideas are really extreme in their denial of the life, really, that we're accustomed — especially today — to living," Upshaw says. "I find a lot of them very difficult to grasp."

In a work so dense, Sellars has kept the staging simple. The set consists of a desk, a chair, a door and a couple of books. Upshaw and a dancer, Michael Schumacher, are the only people onstage. Sellars says that Saariaho paints a vivid picture of Weil in sound. A committed Marxist, the philosopher worked for a time on the assembly line at a Renault factory, and found the work soul-deadening.

"Kaija takes you into a factory, just with the breath of the chorus and this percussion," Sellars says. "So you hear the percussion, all these metallic sounds, and you hear the breath of the chorus, and you understand that these are not machines — this breath of exhaustion is actually human beings. And it's human beings turned into machines. And it's a stunning moment of akind of musical clarity."

Weil had a crisis of faith after working in the factory, and Saariaho illustrates this with just a solo oboe and the singer. She says she did this because "oboe sounds very lonely, and I just wanted to have this contrasting moment and melodic moment after this noisy passage."

Sellars says that La Passion de Simone is a challenging work about a difficult human being whose ideas are profoundly complex — which is why he loves it. "In a world where the most serious things in the history of humanity are confronting us," he says, "and we're facing them with a culture that is relentlessly not serious, what is so beautiful and moving and such a privilege to be able to be at Lincoln Center with Dawn Upshaw, is to say: 'For 80 minutes, could we get serious?'"