Accessibility links
Textbook Details Progress In Wartime Surgery A new medical textbook — published by the military — uses cases from Iraq and Afghanistan to train trauma surgeons. The book features disturbing images, yet also illustrates just how many critical advances have emerged from the theater of war. 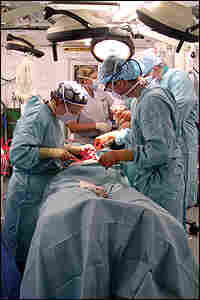 In one of the less gruesome images in the textbook War Surgery in Afghanistan and Iraq, trauma surgeons perform an exploratory laparotomy and divert a colostomy. Courtesy of The Boden Institute hide caption 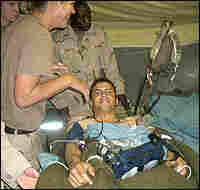 A military hospital patient is alert, interactive, and pain free just minutes after an operation. Courtesy of The Boden Institute hide caption

U.S. combat deaths in Iraq are at their lowest point since the war started in March 2003. But at least 30,000 soldiers have been wounded in action and the use of IEDs and other explosive devices has changed the nature of war injury.

Yet soldiers are more likely to survive today than in any previous conflict because of improved medical knowledge and technology. And surgeons operating both inside and outside the theater of modern war have a new guide: the textbook War Surgery in Afghanistan and Iraq. The book is an instructional collection of cases taken from 2003-2007 for use among medical professionals.

Co-author Dr. Stephen Hetz tells Scott Simon that while the injuries in Iraq aren't necessarily new, the volume of blasts in Iraq is what causes so many devastating, traumatic injuries.

Hetz, who was deployed to Iraq twice, says the battlefield helps surgeons hone existing medical practices with a finer edge. One procedure that he says improved is called "damage control" — a procedure during which the major focus "is to stop the bleeding and further contamination" — whatever doctors can do to get the patient out of the operating room and to a place where he or she can be resuscitated. The process is faster and more effective, enabling higher survival rates.

The coffee-table sized book is not designed for public use. It features more than 400 pages of detailed case studies presented alongside graphic and often disturbing images. These photographs, informal and gruesome, were often taken on consumer digital cameras belonging to doctors and soldiers serving in Iraq and Afghanistan.

Hetz says based on this widespread availability of images and the sheer number of cases, a textbook for surgeons was a "natural offshoot of the war." He says that when he began assembling the book with two of his colleagues, Shawn Christian Nessen and Dave Edmond Lounsubry, a military edict was released limiting what was termed 'actionable intelligence' — information or photographs about the conflict that could compromise the military's operations in Iraq.

The military expressed concerns about the book and Hetz and his colleagues had to submit the cases they wished to use for approval. The collection was finally published this year.

Hetz says War Surgery in Afghanistan and Iraq is a significant book because many civilian surgeons will not seen the types of blast surgeries that occur in Iraq and Afghanistan, and can learn immensely from what the book has to show. 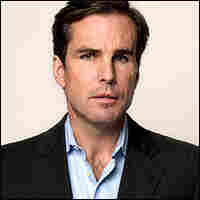 ABC correspondent Bob Woodruff was seriously injured in 2006 by a roadside bomb while on assignment in Iraq. Following his almost year-long recovery, he returned to the airwaves with a report on the medical problems facing soldiers returning from Afghanistan and Iraq. Stefan Radtke/Courtesy of The Boden Institute hide caption 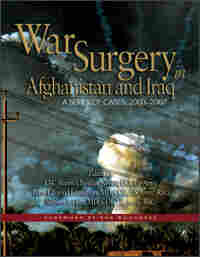 On January 29, 2006, I was riding on top of an Iraqi APC (armored personal carrier), heading down a road in Taji, Iraq, that was supposed to represent a success story of the war: a collaboration between US and Iraqi forces against the insurgents. As the newly named co-anchor of ABC World News Tonight, I was in Iraq to cover President Bush's State of the Union address and to report on the positive stories of the war – the hard work of the military to train and empower local forces on the ground.

In an instant, an improvised explosive device (IED) exploded about 20 yards from the vehicle, and my life was changed forever, as well as that of my cameraman, Doug Vogt. The force of the blast, a 155-mm shell, shattered my skull over the left temporal lobe. Hundreds of rocks, packed around the IED, were blasted into the side of my face. One rock, the size of a child's marble, sheared my helmet chinstrap in half and traveled through the left side of my neck, coming to rest on the carotid artery on the other side of my head.

For the next 36 days, I would remain in a medically induced coma; but the quick actions and amazing skills of the medics, military doctors, nurses, and assistants would not only save my life, but also save my brain function following this life-threatening injury. Their experiences with such large numbers of those wounded by IEDs, most of whom would not have survived in previous wars, gave them the confidence to make split-second decisions. In the medical barracks of Balad, the doctors did not hesitate, giving me the chance for the best possible outcome.

One of the most amazing stories I heard later, which speaks to me of the dedication of our men and women in uniform, is a story about the MEDEVAC pilots. After the IED exploded, a gunfight ensued and the helicopter pilots were instructed not to land. Unaware of who was on the ground and only knowing that someone needed help, these pilots turned down the radio, ignored the order, and landed. I was then taken to Baghdad, assessed, and then sent to Balad, where – within the hour – my skull flap was removed and my brain began swelling. From Balad, I was sent to Landstuhl Regional Medical Center in Germany, a major way station for wounded soldiers en route to the United States. Just 60 hours after my family arrived there, I was ready to be transported again to neurosurgical care at the National Naval Medical Center (also known as Bethesda Naval Hospital) outside of Washington, DC.

It was there that I received top-notch medical care from an expert team of dedicated military specialists. It was their skill, perseverance, team approach, and kindness that created a platform from which to heal. In writing this foreword, I want to applaud the efforts, bravery, and dedication of the American military. It is well known that much of cutting edge medicine in civilian life comes from the valiant efforts, ingenuity, and pure guts of the battlefield physicians in an effort to save lives under extreme conditions. I am not a hero. I leave that to the men and women serving their country in uniform who put their lives on the line ever day for our freedoms. After their wounds, their lives (like mine) are changed forever. What do we owe these men and women? How do we measure our debt to them and their families? What will be our legacy of how we treat those with long-term injuries – such as traumatic brain injury, posttraumatic stress disorder, depression, and other mental illnesses – that can require years of appropriate therapy as the brain heals and the body regenerates?

George Washington, our nation's first Commander in Chief, said, "The willingness with which our young people are likely to serve in any war, no matter how justified, shall be directly proportional to how they perceive the Veterans of earlier wars were treated and appreciated by their nation." Today, in the face of so many injured returning from the wars in Iraq and Afghanistan, we are faced with a wave of wounded, many of them young, all of them returning to a life vastly different than what they left, and families who must learn to deal with a new reality. Are we adequately meeting that charge from our founding father?

Once I passed through the acute stage of my injury, the real work began with my long journey to heal during rehabilitation. Time, energy, commitment, and dedicated professionals supplied the framework to help my brain heal. The love and encouragement of family and friends provided my personal motivation to "get my brain back."

I hope that this book instructs deployed physicians in aspects of the care of initial injuries. But may it also serve as a stepping-off point to focus on continuing that quality of care in the long road to rehabilitation following the injury. My family and I are so appreciative and forever grateful for the medical care that I received from the military. It is our dream that the attention to the wounded remains as focused in the long journey to heal as it is in those white-hot moments in the surgical theater when nothing is spared to save a life.

Excerpted from "War Surgery in Afghanistan and Iraq: A Series of Cases, 2003-2007." Copyright © 2008. Excerpted by permission of the The Borden Institute at the Office of The Surgeon General. All rights reserved. 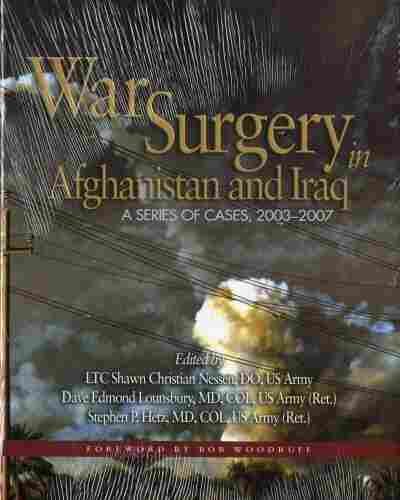 War Surgery in Afghanistan and Iraq