Georgia launched a major offensive to retake control of the breakaway region of South Ossetia. Fighting raged in the region's capital, Tskhinvali. There were reports of civilian deaths. Georgia says Russian warplanes dropped bombs in retaliation.

It's a conflict over a tiny region, but it could have big international repercussions. Last night, the Republic of Georgia tried to regain control of the breakaway province of South Ossetia. By the end of the day, Russian tanks had come to the aid of the separatist rebels, and Russia and Georgia were on the brink of an all-out war. Georgia is an ally of the U.S. It's also pulling some of its troops out of Iraq to help defend its territory. Latest reports say there is fierce fighting between the Russian and Georgian forces. Here's NPR's Moscow correspondent, Gregory Feifer.

GREGORY FEIFER: Georgian artillery firing last night on the South Ossetian capital, Tskhinvali, just hours after the government and pro-Moscow separatists had agreed to a cease-fire. Georgian fighter jets flew in support of the Georgian offensive. By Friday afternoon, Tbilisi said its troops had taken control of the separatists' stronghold.

The South Ossetians say more than 1,000 people have been killed, although there's no confirmation of that. Tbilisi says it's restoring constitutional order in the Moscow-backed region, which has ruled itself since a bloody civil war in the 1990s.

FEIFER: Georgian President Mikhail Saakashvili appeared on national television and ordered mobilization of reservists. Later, the Georgians said they were withdrawing 1,000 troops from Iraq to help defend their country. Saakashvili said he was forced to act after Russian armored vehicles crossed into Georgian territory. He told the BBC Russia wants to topple Georgian democracy.

FEIFER: Georgia's actions have infuriated the Russian leadership. Russian Prime Minister Vladimir Putin - in Beijing for the Olympics - condemned what he called Tbilisi's act of aggression.

FEIFER: They've started a military operation using all kinds of heavy artillery and tanks, he said. This is a very sad and worrying development to which, of course, we'll have to respond.

By early afternoon, convoys of Russian tanks and personnel carriers were pouring into South Ossetia. Russia has hundreds of peace-keeping troops already there, and says more than 10 of its peace-keepers were killed in fierce fighting with the Georgians. Georgia claims 30 of its soldiers were killed by Russian artillery in Tskhinvali and that Russian jets bombed airbases deep inside Georgia. The Georgians say they shot down several Russian planes, something Moscow denies.

Russia and Georgia have teetered on the edge of armed conflict for years. Tbilisi says Moscow has long supported the rebels in South Ossetia and wants to annex the region. Moscow has given passports to more than 90 percent of people in South Ossetia. And today, Russian President Dmitry Medvedev said Russia would punish anyone who attacked them.

FEIFER: As the Russian president, he said, I am bound to protect the lives and honor of Russian citizens, wherever they may be.

A large part of Russia's conflict with Georgia is Tbilisi's strong alliance with Washington and drive to join NATO. Military analyst Aleksandr Golts says if outright war breaks out, Russia would win militarily but at a political cost.

Mr. ALEKSANDR GOLTS (Military Analyst): If Russia will interfere now, our country will be aggressor in eyes of all international community, and Saakashvili will won in this situation.

FEIFER: Western diplomats are scrambling to prevent the hostilities from turning into a major conflict that could engulf the entire Caucasus region. The United States, which has strategic interest in Georgia, says it supports Georgia's territorial integrity. NATO and the European Union have called for an immediate cease-fire. Gregory Feifer, NPR News, Moscow. 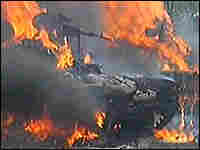 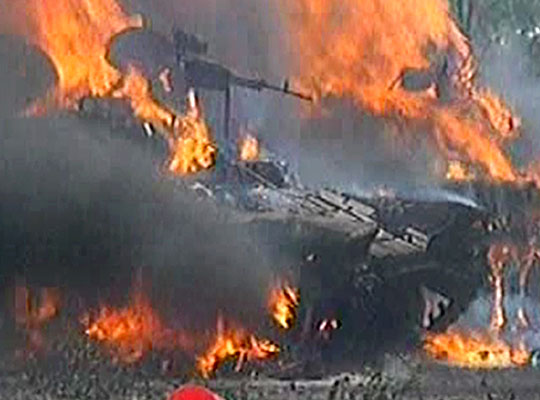 Georgia launched a massive attack Friday to regain control over the breakaway region of South Ossetia. 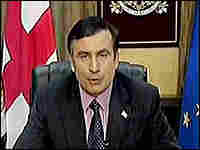 Russia sent tanks and warplanes into the former Soviet republic of Georgia on Friday after Georgia launched a military offensive to retake its breakaway province, South Ossetia.

A large number of civilians were reported dead as a result of the military action by Georgia and Russia in the worst outbreak of violence since South Ossetia won de facto independence from Georgia in 1992. Figures of the number killed vary widely from hundreds to more than a thousand. The region encompasses about 50,000 people.

"I saw bodies lying on the streets, around ruined buildings, in cars," said Lyudmila Ostayeva, who fled the South Ossetian capital of Tskhinvali to a village near the border with Russia. "It's impossible to count them now. There is hardly a single building left undamaged."

War Of Words, Too

Georgia's President Mikhail Saakashvili said Russia had been amassing troops on the border for months and used Georgia's efforts to retake control of the region as an excuse to invade.

"We are no longer in 1979. It's no longer Afghanistan. It's no longer Czechoslovakia of 1968," Saakashvili said, citing Soviet actions of the past. "You cannot bring in tanks like to Budapest in 1956."

"They've started a military operation using all kinds of heavy artillery and tanks," Putin said. "This is a very sad and worrying development to which of course we'll have to respond."

Western diplomats are scrambling to prevent the hostilities from turning into a major conflict that could engulf the entire Caucasus region. NATO and the European Union called for an immediate cease-fire.

Gallegos said a U.S. envoy is traveling to the region Friday in hopes of bringing an end to hostilities. The U.S. supports Georgia's territorial integrity, he said.

U.S. Defense Department officials have had some contact with Georgian authorities, said Pentagon spokesman Bryan Whitman. He said Georgia has not asked for U.S. help, but he would not give any details of the discussions.

According to Whitman, the U.S. has about 130 trainers in Georgia, including a few dozen civilians who are all working to prepare the Georgian forces for their next deployment to Iraq. However, Georgian officials announced Friday that they will withdraw 1,000 soldiers from Iraq to help fight off Russian forces in South Ossetia.

Georgia launched a major offensive into South Ossetia overnight, with Georgian fighter jets, heavy artillery and rocket attacks pounding positions inside Tskhinvali. Buildings were ablaze, and much of the city was damaged. The separatists evacuated women and children north of the border into Russia.

Saakashvili said his forces had "freed" the greater part of Tskhinvali, and he ordered a full-scale mobilization of military reservists. Georgian troops have been fighting pro-Moscow rebels in the separatist stronghold.

The Russian Defense Ministry had pledged to protect South Ossetians, most of whom have Russian citizenship, as the conflict in the region heated up.

Georgian officials said they launched the operation after a week of clashes between separatists and Georgian troops in which nearly 20 people were killed. Georgia aims to end South Ossetia's effective independence, won in a 1991-92 war.