Despite the larger-than-life presence of star player Yao Ming, the Chinese men's basketball team was no match Sunday for the American "Redeem Team." The American men trounced the Chinese, winning by more than 30 points. 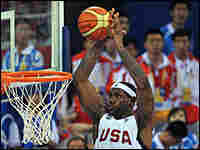 LeBron James dunks during the men's preliminary round group B basketball match against China at the Olympic basketball gymnasium on Aug. 10, 2008. Gabriel Bouys/AFP/Getty Images hide caption 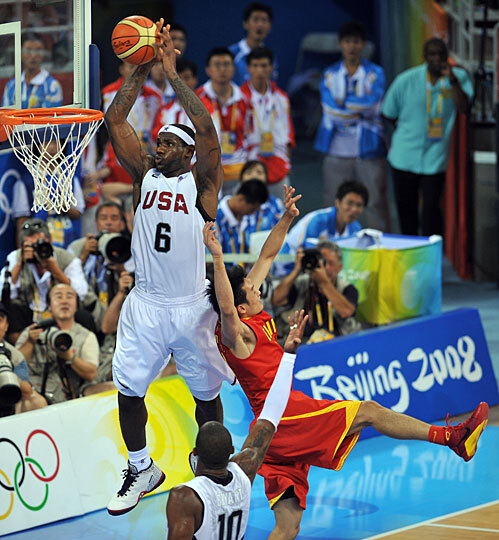 LeBron James dunks during the men's preliminary round group B basketball match against China at the Olympic basketball gymnasium on Aug. 10, 2008.

At the Olympics today, the United States sent a strong message on the basketball court. The U.S. team of NBA stars pounded the home team, China, by a score of 101 to 70. It came on the second day of the games.

And as NPR's Tom Goldman reports, for basketball-crazy China, it was an emotional moment.

TOM GOLDMAN: It's rare to have so much anticipation this early in an Olympiad. But the buzz was palpable at the Beijing Olympic basketball gymnasium. Two President Bushes were there, father and son, the current First Lady, the Chinese Foreign Minister and a home crowd that cheered both teams, such is the reputation of the NBA in China.

GOLDMAN: And what a start. Seven-foot six-inch Chinese star Yao Ming, said to be the face of these Olympic Games, hit a three-point shot and raised his fist. China stayed close through the first 15 minutes shooting well from long distance, pushing the ball off the court while the U.S. made mistakes and shot poorly. But there is just too much athleticism on the American team, and about midway through the second period, the athletes took over.

It became a dunk show with LeBron James, Kobe Bryant, and Dwayne Wade taking flight and seemingly never coming down. At the final horn, the U.S. had a 31-point victory and a solid start on its road to basketball redemption. In recent years, the U.S. has fallen from its lofty perch on top of the basketball world. This team has named itself redeem team.

Indeed fans back in America sent this group to China with a mandate to dominate and to win back the gold medal it used to win all the time, but lost four years ago in Athens. But the team has to walk a fine line here at an Olympics in China which loves NBA hoops, but also values decorum and humility. This challenge was evident in an exchange after the game between reporters and U.S. head coach Mike Krzyzewski.

Unidentified Man: Coach K, there are more than 20 dunks in that game, do you think it's kind of show off?

Mr. MIKE KRZYZEWSKI (Coach): Well, there was no showing off. I mean when you dunk you have to dunk. They have three seven-footers. I don't know what your definition of showing off is. To me that's hard basketball. You know, we played our, we played very hard.

GOLDMAN: And Krzyzewski bristled again when asked about his players' egos.

GOLDMAN: In fact, Krzyzewski's job sounds easier than that of Chinese coach Jonas Kazlauskas, who's from Lithuania. He talked about how difficult psychologically the game was for his players even though they had all of China behind them, and as underdogs had nothing to lose.

Mr. JONAS KAZLAUSKAS (Coach): China shows a lot, a lot NBA games. And those guys are hero for some of our players. This thinks makes very difficult and psychologically very difficult.

GOLDMAN: Geez, so one team is psyched out because it's playing against its heroes, the other has to balance huge expectations at home with the need to be gentlemanly as it tries to throttle its opponents. Sounds like it's time for these two, China and the U.S. to take some time away from each other, which they will as they now go off and play four more games against other opponents in the first round of the tournament.