Accessibility links
Bolivian Referendum Reveals Sharp Divisions In Bolivia on Sunday, President Evo Morales faced a recall referendum. It was the most serious challenge since he took office two years ago.

In Bolivia on Sunday, President Evo Morales faced a recall referendum. It was the most serious challenge since he took office two years ago.

Polls have just closed, and final results aren't in yet. But the referendum has exposed sharp divisions in Bolivia — between those who support the president's socialist agenda and those who worry he's concentrating too much power in his own hands. 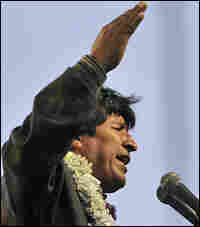 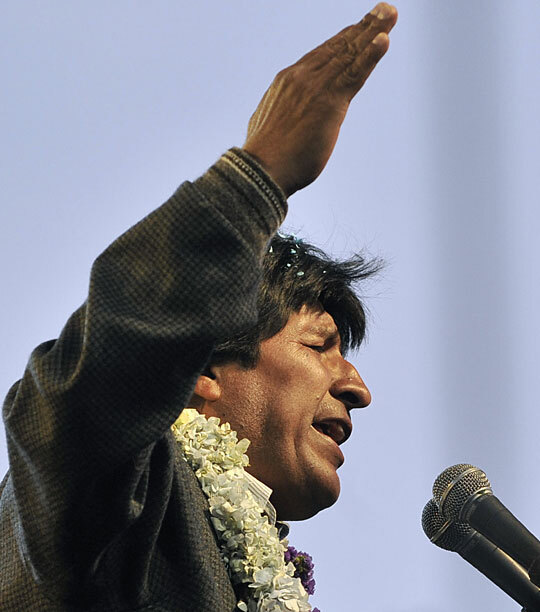 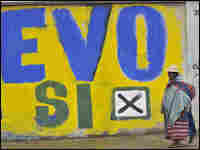 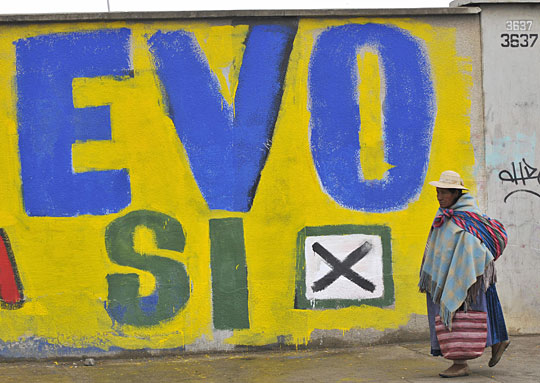 A woman passes by a wall painted with propaganda supporting Morales, in El Alto on Friday.

One of Latin America's new populist leaders faces a major challenge on Sunday. In Bolivia, President Evo Morales has built a strong base of support among the poor in the country's high plains since taking office in 2006. But those in the country's wealthier eastern lowlands say his path to socialism will lead Bolivia to ruin. A referendum is asking Bolivians whether to keep Morales as president.

The people of this vast but remote country in the heart of South America will also vote on the fate of prefects — or governors — who lead eight states.

Polls can be inconclusive here, but Morales, who is an Aymara Indian, is expected to win. So are several governors. They include tough government foes in the opposition bastions of Santa Cruz in the east, and Tarija in the south.

That means that Bolivia's already sharp divisions will be even more apparent, which could signal more political strife in the future.

Lately, protests have come from all sides — and in all forms.

Jorge Lazarte is a political scientist and member of a citizens' assembly that recently drew up a new constitution. He says that Morales' government has been too confrontational — too quick to impose its policies and too mired in raising age-old debates.

He says that Morales' style has helped create a powerful opposition.

Government foes feel Morales governs just for his supporters — not for the rest of the country. And they've already voted for autonomy, giving their states more say over how to raise revenues and how to spend their money.

They are angry that Morales has nationalized the natural gas industry and plans to seize big farms. They also dislike his close ties to Venezuela's Socialist President Hugo Chavez, who showers Morales' government with aid.

The divisions are particularly apparent in Bolivia's Congress, where debates are often heated and characterized by name-calling and insults.

This week, Christina Rojas, a congresswoman from Morales' party, attacked what she called neoliberals and sell-outs. She said the problem with Morales' opponents is that they cannot stand that they're no longer in power.

"After many centuries, we have an indigenous president. So the traditional parties do not want this advance," Rojas says. "They are always against a process of change."

Roger Pinto, a sentor in the opposition Podemos party, couldn't disagree more. He says the president avoids debating the merits of opposition proposals.

"The president uses victimhood frequently — attacking the whites, making it a racial issue," he says.

Pinto says Morales' hold on half the country — the so-called half-moon states that form the opposition — will be tenuous at best after the referendum.

But in the capital La Paz's main square on independence day, bands played the national anthem, veterans marched in their old uniforms and supporters cheered for the president.

The president, flanked by his Cabinet, spoke to the crowds from a balcony. He said his fight has been for the liberation of his people and that his government had done more for the poor than any other — providing subsidies, medical care, nationalizing once-private industries.

Those words enthralled supporters like Remedios Gironda, who said she's with the government and that her support for what the government is doing is unwavering.