Accessibility links
Soldier's Family Challenges Army Suicide Report The Army says 19-year-old Pfc. LaVena Johnson committed suicide while serving in Iraq, but her family isn't buying it. John Johnson explains why he believes his daughter was brutally raped and murdered — and why the Army wants it covered up. Johnson is joined by retired Col. Ann Wright, who raises awareness of sexual assault in the military. 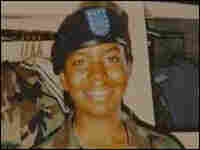 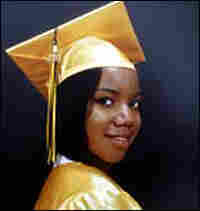 Against her parents' wishes, the former honor roll student enlisted in the military instead of going directly to college after high school. Family of LaVena Johnson hide caption

The family of Army Pfc. LaVena Johnson remains unconvinced that the 19-year-old soldier from St. Louis took her own life in 2005 while serving in Iraq.

On the morning of July 19, 2005, John and Linda Johnson awoke to a loud banging on the door. Standing on the porch was a man in military uniform.

"I have a message for you from the Secretary of Defense. This morning, LaVena L. Johnson died of self-inflicted wounds," John Johnson recalls being told by an army staff sargeant.

Devastated by the news, the soldier's parents were immediately suspicious.

"Suicide wouldn't have been something that she would even consider," says LaVena's father, John Johnson, a psychologist.

But three years later, the family also doubts their daughter's suicide for another reason: the evidence.

An initial autopsy performed by the military supports the cause of death, as reported by the army. But photos taken during the investigation and obtained by the family suggest otherwise.

Johnson says images he received of his daughter's body show abrasions to the face, burns, a broken nose and signs of sexual abuse, details not mentioned in the autopsy.

The family says they were also told that Pfc. Johnson was found dead in her barracks with a gunshot wound to the head. The information conflicts with details reported to a family relative by fellow soldiers of LaVena in Iraq who say that Johnson was actually found dead in a contractor's tent.

When asked why he thinks the government would knowingly withhold essential information pertaining to the death of his daughter, Johnson has a theory.

"It's probably involving somebody with some rank and some prestige, and they [the U.S. Military] are covering for them," says the father, who is also a veteran.

Retired Army Col. Ann Wright, who works to raise awareness of sexual assault in the military, is not stunned by Johnson's theory. According to the Associated Press, 15 percent of female veterans seeking care from VA facilities from time served in Iraq and Afghanistan show signs of sexual abuse.

"It's very difficult to report these things, particularly if the perpetrator is a member of your chain of command," explains Wright, referencing the abuse of military power, sometimes in the form of "command rape."

The Johnsons continue to press the government for details of what they believe really happened — that LaVena Johnson was murdered, possibly at the hands of a fellow service member.

"Nobody, in any kind of public position, has the right to be above the law," Johnson says.

As with all CID cases, if new information pertinent to this investigation becomes available, CID will reopen the investigation if warranted.