Accessibility links
Space Travel: Only for Billionaires? Billionaire Charles Simonyi, a former Microsoft guru, is blasting off into space this weekend. Simonyi paid $25 million for a short vacation in Earth's orbit on the International Space Station. He says the private spaceflight industry is beginning to take off.

Listen
Space Travel: Only for Billionaires? 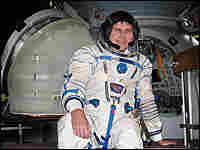 Charles Simonyi has spent months training for his spaceflight. He paid $25 million to orbit the Earth on the International Space Station. Simonyi's mission blasts off on Saturday. Courtesy of CharlesInSpace.com hide caption 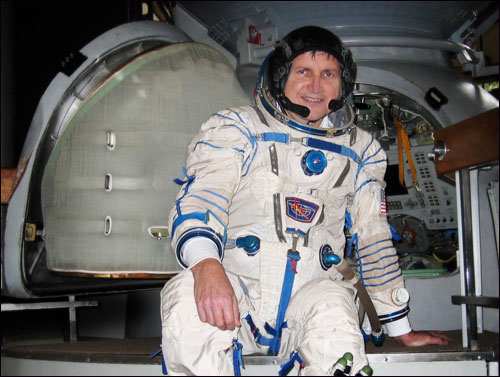 Charles Simonyi has spent months training for his spaceflight. He paid $25 million to orbit the Earth on the International Space Station. Simonyi's mission blasts off on Saturday. 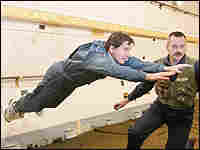 As a child growing up in Hungary, Simonyi was very interested in space travel. Above, Simonyi trains in simulated weightlessness to prepare for life in orbit. Courtesy of Space Adventures hide caption 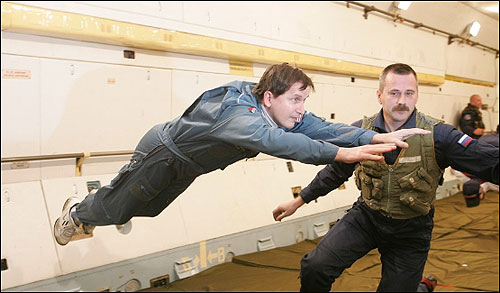 As a child growing up in Hungary, Simonyi was very interested in space travel. Above, Simonyi trains in simulated weightlessness to prepare for life in orbit.

This weekend, a billionaire is going into outer space. Charles Simonyi is a former Microsoft guru who helped create popular office programs such as Word and Excel. He recently spent around $25 million for a ticket to ride into Earth's orbit. But he thinks it won't be long before the rest of us can go, too. He sees his trip as just the latest step forward in the emerging industry of private space tourism.

Simonyi has been training in Russia for seven months. The night before he left for the launch site in Kazakhstan, he took a break from packing to chat on the phone. He says that growing up in Hungary, he was crazy about space:

"I knew everything about space. I knew the names of the space dogs. You know, Laika and Chernushka..." Simonyi begins to rattle off a long list.

He never thought he would follow in the paw prints of those famous space dogs. But then, a couple of years ago, he went on a tour of a Russian space center. He says he got to see cosmonauts blast off.

"The people who organize these tours, Space Adventures," Simonyi says, "suggested that I might be interested in actually flying on those rockets."

Simonyi says at first, he couldn't believe it. Was he really qualified?

One thing he didn't worry about was the price of a ticket, which was around $25 million.

"The money, in my case," he says, "wasn't the greatest consideration."

Forbes magazine says Simonyi is a billionaire, so $25 million seemed totally doable. It turns out that he was healthy enough to go. And he knew Space Adventures could deliver.

The Virginia-based company was founded almost a decade ago by an aerospace engineer. Its Astronaut Advisory Board includes Buzz Aldrin, and it has an agreement with the Russian space agency. Simonyi will be the fifth paying customer it has sent up. On April 7, he will blast off with two cosmonauts. He'll then spend over a week orbiting Earth on the space station.

The Private Race to Space

So far, Space Adventures is the only company to put customers into space. But space consultant Alan Ladwig, with Whitney, Bradley & Brown, Inc., says it won't be long before others do.

"You've got Virgin Galactic out there with Richard Branson, you've got Blue Origin with Jeff Bezos, Rocketplane Kistler," Ladwig says. "There's any number of companies going after a market that they believe could be close to $1 billion over the next 10 to 15 years."

Ladwig used to work at NASA, with the program that aimed to put civilians like teachers and journalists into space. He says 20 years ago, the idea of space tourists going up just for fun seemed laughable.

"It had what they called at NASA at the time 'the snicker factor,'" he says.

But now, companies have ambitious agendas. Eric Anderson, founder of Space Adventures, plans to send a pair of tourists around the moon.

"The price tag on the lunar expedition, which could launch as early as 2009, is $100 million per seat," Anderson says.

Anderson is dead serious. He says the Russians have the technology, and he's got customers.

"We are fairly certain who would go on the first mission," he says, "and we even have takers for the second mission, potentially."

Even though the craft wouldn't land on the moon, the view would be amazing. Now, a $100 million moon shot is pretty far out. But other companies are offering cheaper options, and there's clearly a demand.

Space Travel on a Shoestring Budget

Loretta and George Whitesides live in Washington, D.C., where they both work for organizations that promote space exploration. Loretta Whitesides heads up the Space Generation Foundation, and Charles Whitesides runs the National Space Society.

"We've had the idea to go to space together for a long time," says Charles Whitesides. "I mean, obviously we are sort of space junkies. We started thinking — maybe like five years ago, almost — 'How can we get into space?'"

They couldn't afford a Russian flight. Instead, they bought tickets from Virgin Galactic. Starting in about two years, this company says it will be sending people more than 65 miles up. Loretta Whitesides says the trip will be brief but eventful.

"You'll be up there for about seven minutes," she says. "You'll be able to see the curvature of the earth and the blackness of space. And as soon as they turn off the rocket engine, that's when you'll experience weightlessness."

The cost? George Whitesides says it's about what they'd spend on a house.

'Everything Starts to Float'

If that seems beyond your budget, there's no need to give up yet. For a mere $3,500, you can float like an astronaut without leaving Earth. Noah McMahon works with the Zero Gravity Corporation.

"We offer a chance for anybody to experience weightlessness," he says.

The company flies a big airplane plane up and down, like a roller coaster. This produces bursts of zero gravity that last around 25 seconds.

"When you're in the airplane, you have no idea that you're even in an airplane," says McMahon. "It's like you're in a magic room and everything starts to float."

Over 2,000 customers have done it — all kinds of people. Physicist Stephen Hawking is going up later this month. And the company has just signed a deal with The Sharper Image to sell tickets at your local mall, starting in May.

For former Microsoftie Charles Simonyi, these are all signs that something is really happening in the space industry, just like things changed in his field, computers. When he started out, computers were just for big corporations and governments.

"It was the involvement of civilians [with] the personal computer that really made the industry explode with the energy and creativity," Simonyi says.

He knows his ticket to space is more than most people could afford. But he hopes that by buying it, he's helping to someday make space travel a lot cheaper for everyone else.