Accessibility links
Crowd Sourcing Turns Business On Its Head What happens when a company lets customers design and vote on their own products? Some Web-based outfits are finding success by doing just that. And the new business model is really catching on. 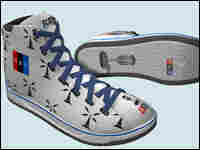 An NPR sneaker designed — but not for sale — by RYZwear.com. Design By RYZwear.com hide caption 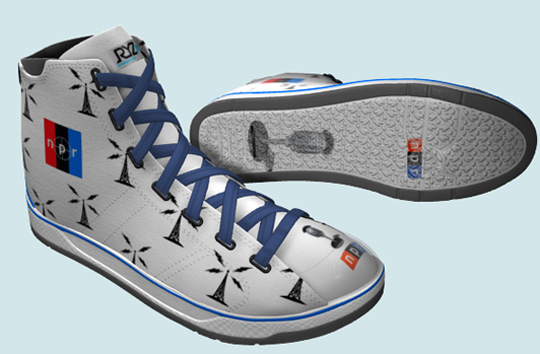 An NPR sneaker designed — but not for sale — by RYZwear.com.

How does a sneaker go from a vision to a shoe? Users download a template and illustrate everything from the inside and outside panels to the tongue, footbed, heel and outer sole. As RYZ puts it, designers provide the illustration; the company provides the shoe.

The shoe design is then posted on RYZwear.com, and the voting begins. RYZ will produce the winning kicks — and the designer gets a piece of the action. Click to see a sneaker template.

What happens when a company lets consumers design and vote on their own products? In theory, at least, the firm's overhead goes down and profits go up.

The business model is based on so-called crowd sourcing, or community-based design. The success enjoyed by a T-shirt company called Threadless prompted other firms to explore how the model might work for them.

One of those companies is RYZ, a tiny, high-end sneaker company in Portland, Ore.

Like other companies relying on community design, RYZ doesn't need a large marketing or design staff. It uses potential customers for that.

Would-be designers use a template from the company's Web site to create a pair of high-rise sneakers. The sneaker designs are posted online, and viewers vote on which ones they like. Winning designs are produced, and the designer gets $1,000 plus 1 percent royalties.

Marketing costs? Practically nothing. The business model relies largely on the Internet, hoping that online voting and buzz on sites such as MySpace and Facebook will create demand for specific products.

"This is really the biggest paradigm shift in innovation since the Industrial Revolution," von Hippel says. "For a couple hundred years or so, manufacturers have been really imperfect at understanding people's needs. Now people get to decide what they want for themselves."

Moreover, relying on customers for design and market research allows his company to move much more quickly, says Rob Langstaff, the founder and CEO of RYZ.

Langstaff, who used to head Adidas North America, says in a traditional footwear company, it might take 12 months — and a substantial investment — to get a new design to market.

"What we've done is compressed this time using the Internet," Langstaff says. Design to final product: about 6 weeks.

The community-based model will be easier to adopt in some industries than in others. For example, designing T-shirts and sneakers is quite different from engineering complex industrial equipment.

But von Hipple says lots of firms see the handwriting on the wall; many are turning to the Internet for customer feedback and ideas, but they are not yet comfortable with the idea that customers want manufacturers to listen to them.

But, he says, "it's almost less risky to have most talented actors on your stage than to try to do it yourself."

Still, he admits that for his business to take off, consumers will have to take a leap of faith — from voting and talking about a shoe design to actually plunking down a sizable chunk of change to buy a pair of sneakers.