Accessibility links
Why Georgia-Russia Conflict Is Significant For U.S. The military action in South Ossetia is highlighting Russia's international geopolitical role. "It is the first time since the fall of the Berlin wall, where Russian forces have been very active — air and land attacks — against a sovereign country," explains political science professor Michael McFaul.

Listen
Why Georgia-Russia Conflict Is Significant For U.S.

"It is the first time since the fall of the Berlin wall, where Russian forces have been very active — air and land attacks — against a sovereign country," he says.

He says the situation raises the question of, "Can we allow the use of force by big countries against little countries to stand?"

NPR's Ivan Watson reports from Georgia on 'All Things Considered' 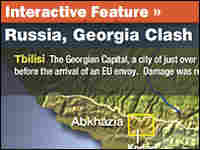 Russian forces pushed troops from the former Soviet Republic of Georgia out of a key town 50 miles from the Georgian capital Monday, prompting a plea from President Bush that Russia accept Georgia's move toward a peace agreement.

He said Russia may be threatening the capital city of Tbilisi after seizing control of Gori and may bomb the civilian airport at Tbilisi.

"If these reports are accurate, these Russian actions would represent a significant and brutal escalation of the conflict in Georgia," Bush said. "These actions would be inconsistent with assurance that we have received from Russia that its objectives were limited to restoring the status quo in South Ossetia that existed before fighting began."

Russian troops drove deep into Georgian territory in the country's western sector Monday after crossing into South Ossetia to support separatists who want the region to break away from Georgia.

Georgian President Mikhail Saakashvili said Monday that the Russian military move effectively cuts his small country in half. He appealed for international intervention, accusing Russia of trying to topple his government and annex Georgia's territory.

"We are in the process of invasion, occupation and annihilation of an independent, democratic country," he said during a conference call with reporters. "Please wake up everybody. And please, make your position and speak with a united voice."

Meanwhile, Russia's Prime Minister Vladimir Putin on Monday criticized the United States for airlifting some 2,000 Georgian troops from Iraq after they were recalled home. Putin said that the U.S. move will hamper efforts to resolve the conflict.

On Sunday, Saakashvili pulled his troops out of South Ossetia and has since made repeated appeals for a cease-fire. He briefly visited Gori Monday, wearing a camouflage flak jacket. He was accompanied by French Foreign Minister Bernard Kouchner, who traveled to the region to try to hammer out a cease-fire agreement.

When asked if there had been any luck with negotiations, Kouchner replied:

"Yes. We had some luck here, but this is just the beginning. Having luck on one side doesn't mean anything if you have no luck on the other side, so we'll go to Moscow now and see."