Accessibility links
A Photo Project's Message: Hello, Neighbor If you're someone who thinks neighbors and neighborhoods aren't what they used to be, you aren't alone. A sense of community can be hard to come by, even in thriving areas. A public photography project in Oregon is meant to change that, with large banner portraits of residents.

See images taken by Julie Keefe and her young volunteers. 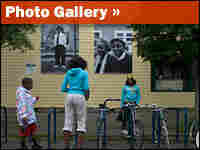 Tommie Washington is celebrating his 60th anniversary living in the same Portland, Ore., neighborhood. In fact, he has spent 60 years in the very same house, which is now full of memories.

"We knew all the neighbors," Washington recalls. "As kids, we could run in one house in the front door and go out the back door with a sweet potato pie. The community was a village raising all the kids."

Those days are history; Washington's village of old has been gentrifying at a dizzying speed. But his affable face is still a prominent one in his community. You can see it on a banner hanging on North Mississippi Avenue, as part of a project called Hello Neighbor.

Hello Neighbor was conceived by photojournalist Julie Keefe, after she observed how gentrification was leaving many of her own neighborhood's kids estranged. As their young friends moved away, strangers were moving in. They were often young, often wary, and usually white.

And, as Keefe noticed, neighbors were no longer saying "hello" to each other.

"So I thought, if the kids could somehow approach their new neighbors," Keefe said, "and let the neighbors know they were actually interested in them, the kids and the neighbors could meet one another. It's all about building community."

Using her strengths as an accomplished photojournalist and her skills as a teacher, Keefe launched Hello Neighbor with Caldera, a Portland-based arts organization. The yearlong project involved kids from six Portland neighborhoods and six central Oregon towns. In the process, all of them learned interviewing techniques and portrait photography.

Here's how Hello Neighbor worked. First, Julie Keefe and her group decided on a list of locals they wanted to meet, of any age or race: the local preacher and his wife; the barista from the neighborhood coffee house; the gay couple who used olive oil cans for the siding on their house.

Those willing to participate — and most were — were then invited to school, or invited the kids to their homes, to answer questions the kids had come up with. Among them: How old are you? Do you feel safe on your street? What are you most proud of?

Most answers were pretty straightforward, and often revealing. The kids asked 21-year-old Bobby Williams if he felt comfortable in his neighborhood.

"I sense that people on the street are scared," he told them. "I feel it in my chest."

In fact, until Hello Neighbor, one of the 8th-graders in the project had been afraid of Bobby Williams most of her life.

Armed with insights about their subjects after the interviews, the kids took out their grant-funded, high-end cameras and began to shoot portraits of their neighbors. "Remember to place people!" shouted Julie Keefe amidst the swarm of students.

"Give them feedback! Tell them how to stand!"

Portraits were taken in school, at peoples' homes or on the street. The local preacher and his wife were photographed outside church.

After Keefe chose the best portrait of all those taken, it was printed on a huge vinyl banner, then publicly displayed in the community.

When interviewed about her year working on the Hello Neighbor project, 14-year-old Precious Andrews shared a few of her insights.

"When you say 'Hi' to people, it takes you out of your comfort zone," she said. "I guess it makes you nervous meeting new people," she said.

"Like what you think they'll think about you. But if somebody says, "Hi! I'm glad to see you!" you have some sort of reason to be here.