Accessibility links
'Girl Cut in Two': An Old Scandal, Stylishly Redressed There are ominous goings-on, yes — a murder, even — but mostly what gets slashed in Claude Chabrol's wittily accomplished new black comedy are bourgeois facades and upright reputations. 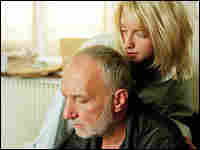 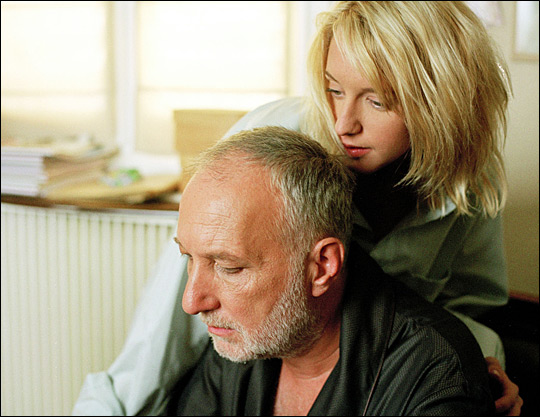 A Girl Cut In Two 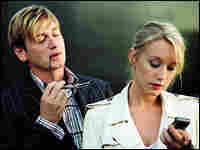 By all appearances, Paul (Benoit Magimel) has everything — everything, of course, save Gabrielle. (And perhaps his sanity.) IFC Films hide caption 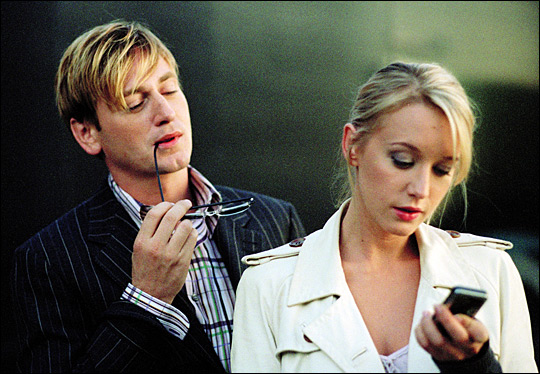 By all appearances, Paul (Benoit Magimel) has everything — everything, of course, save Gabrielle. (And perhaps his sanity.)

French Hitchcock disciple Claude Chabrol is hardly averse to bloody climaxes, but no body is cleaved in his darkly droll new entertainment: The principal things that get slashed in A Girl Cut in Two are bourgeois facades and upright reputations.

The movie's "girl" is Gabrielle (Ludivine Sagnier), a Lyons weathercaster with an ideal surname: Deneige.

That means "snowy," and it doesn't just suit the forecaster's occupation. Partial to jeans and sweaters, Gabrielle may not be as pure as frozen precip. But she's hardly the wanton temptress Sagnier has played in such films as Swimming Pool.

Gabrielle is vibrant and pretty, and soon she's being pursued by two men: famous, gray-bearded novelist Charles (Francois Berleand), who lives just outside town with his "saintly" wife; and spoiled rich brat Paul (Benoit Magimel), heir to an industrial fortune.

Dressed like a Carnaby Street dandy, biting his nails obsessively, Paul is clearly unstable; Gabrielle rejects him in favor of the much older Charles, who's refined, literary and a father substitute for the young woman, who was raised by a single mom.

Paul decides to protect Gabrielle and to avenge her virtue. What happens next was inspired by the case of architect Stanford White, his showgirl lover and her aggrieved husband — a 1906 scandal fictionalized in the book and movie Ragtime.

Gabrielle is first introduced while she's on air, with nothing but a green screen behind her. The weather graphics her viewers see aren't real, of course. Neither is the avuncular personality Charles puts on when it's time to publicize his latest book. Paul's uptight mother is especially concerned with appearances, but all the major players have their costumes.

That includes Gabrielle, glimpsed in an ironic epilogue that evokes Max Ophuls' 1955 masterpiece Lola Montes. One of the founders of the French new wave, the 78-year-old Chabrol remains a discerning cinephile.

And if A Girl Cut in Two lacks the urgency of his best work, it compensates with wit, style and a few neat tweaks of the viewer's expectations. Charles may be a cad, but Chabrol is proof that some older men are trustworthy. (Recommended).