Accessibility links
Los Campesinos!: Dark But Gleeful The Welsh band Los Campesinos! blasted through four songs in record time during this studio session from KEXP. Throughout the performance, the group played its acerbic but infectious pop with the unabashed joy of a bunch of schoolkids on the last day before summer. 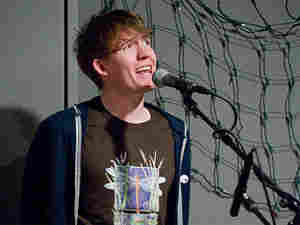 During KEXP's pledge drives, I pitch for eight hours a day, sometimes for six days straight. While we do most of our in-studios live, we decided to tape a visit from the Welsh band Los Campesinos! after I got off the air; otherwise, we couldn't do it at all. I love the band and really wanted to make it happen, but after finishing the workday, I was wiped out. I slowly dragged my tired ass down the hall, having second thoughts as I made my way to the studio.

But there I was, greeted by the nicest and most genuine guests I'd seen in the studio in a long time. There was something about them that gave the room a vibrant energy, even before the music started. (That and they had a tiny little keyboard and xylophone that made up half of their sound.) Just like on their recent album, Hold On Now, Youngster..., Los Campesinos! played infectious but seriously dark pop with the unabashed glee of a bunch of schoolkids on the last day before summer. There was something awesome and vaguely unsettling about watching these sweet people sing such knotty, acerbic songs.

Los Campesinos! blew through four tracks in record time, stopping only to talk with me about being in Seattle for the first time and sing the praises of American audiences. They also mentioned their genuine surprise that so many people were coming out to their shows. Seeing a band so wide-eyed and psyched to be on the road and in our studios was a wonderful experience; it was more than enough to inspire me to go back to raising the money that helps pay for more great in-studio performances.