Accessibility links
Brain Injury Turns Ariz. Patient Into A Mystery Man For nearly four months, a man known only as "Adobe" has been hospitalized in Tucson, Ariz., with a severe brain injury. He has no recollection of his name or home, he speaks no English, and so far, no one knows how to put the pieces together. 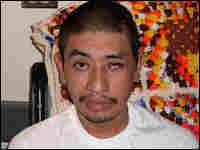 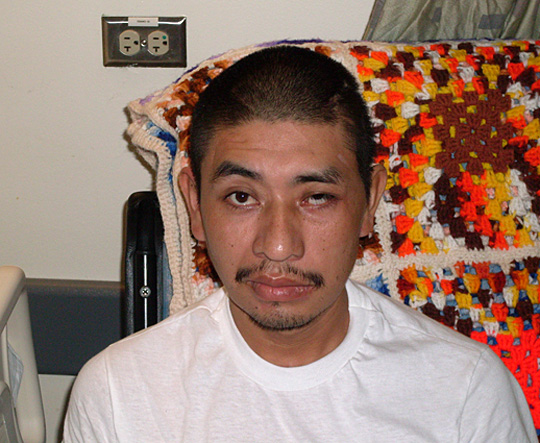 "Adobe" is being treated for a severe brain injury at the University Medical Center in Tucson, Ariz. His real identity remains unknown.

For nearly four months, a man known only as "Adobe" has been hospitalized in University Medical Center in Tucson, Ariz., recovering from a severe brain injury.

The nickname is a random, preassigned code name the hospital gives trauma patients when they arrive. His real name is among many things that are a mystery because he lost his memory.

What the hospital does know is that Adobe was thrown from a pickup truck on April 27 when it flipped on a southern Arizona road. Four men in the truck died, 18 were flown to hospitals and at least 20 others escaped. It's likely all of the men in the truck were illegal immigrants.

Adobe came to UMC by emergency vehicle with severe damage to his frontal lobe — the part of the brain controlling higher functions and some long-term memory.

Still, Barbara Felix, who coordinates international patient services at the medical center, says some staff members there thought they knew who he was.

"There was a bundle of clothing that came in with him when he entered the hospital, and in there we found a voter registration card from Mexico," Felix says.

The ID had a name — Omar — and a picture. But as he healed after surgery, the patient no longer looked like the picture. And when the Mexican consulate contacted Omar's family back home, the family said Omar was not missing.

Meanwhile, others in his traveling party who might know his identity had scattered.

Still, Marti Gillum, a nurse practitioner, says the patient indeed remembers some things. She says he has been crying and talking about his five kids.

"He's homesick," she says. "He tells the nurses he wants to go home."

But he doesn't know where home is.

They do know what he likes to eat — melon, fruit and fish – but that's not much of a clue.

When asked in Spanish what his name is, he replies, "Cindi."

"That's what his response is to anything you ask him. When you say where he's from, that's what he says," nurse Kristy Lopez says. "We think he's trying to say something else, but the words aren't coming out."

UMC is paying for his care. No one's added up the cost, but the hospital spends about $5 million a year caring for foreign nationals who can't pay.

The hospital is not legally required to care for a patient. Asked if Adobe might be putting on an act to get free care, Felix says she doesn't think he's capable of it. His brain injuries are too severe.

Meanwhile, over the nearly four months Adobe's been in their care, Lopez says staff members have grown close to their mystery patient — getting him ice cream, taking him outdoors, even buying him clothes.

"He doesn't have any family, so we've become his family," Lopez says.

Except somewhere, he may have a real family wondering where he is.

The consulates of Mexico, Guatemala, El Salvador and Ecuador are circulating the man's photograph. If you recognize him, contact one of the consulates — or the medical center at 520-694-4412.

Border Fence a Great Divide for Texas Landowners March 24, 2008
Deportee a Stranger in His Homeland April 8, 2008
Deportee Back Home After Near-Death Trip to U.S. April 7, 2008