Accessibility links
The Power Of 'Hello' When he was a child, Howard White's mother taught him the importance of a simple, polite greeting. Now an executive at Nike, White believes everyone he meets deserves to be acknowledged. For him, that begins with "hello."

Listen
The Power Of 'Hello' 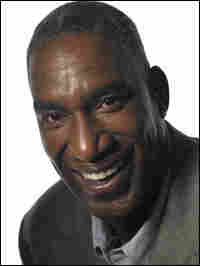 Former University of Maryland point guard Howard White is vice president of Jordan Brand at Nike. He founded Believe to Achieve, Nike's motivational program for youth, and wrote a book by the same name. White lives with his family in Lake Oswego, Ore. Photo Courtesy of Howard White hide caption

I work at a company where there are about a gazillion employees. I can't say that I know them all by name, but I know my fair share of them. I think that almost all of them know me. I'd say that's the reason I've been able to go wherever it is I've made it to in this world. It's all based on one simple principle: I believe every single person deserves to be acknowledged, however small or simple the greeting.

When I was about 10 years old, I was walking down the street with my mother. She stopped to speak to Mr. Lee. I was busy trying to bulls-eye the "O" in the stop sign with a rock. I knew I could see Mr. Lee any old time around the neighborhood, so I didn't pay any attention to him.

After we passed Mr. Lee, my mother stopped me and said something that has stuck with me from that day until now. She said, "You let that be the last time you ever walk by somebody and not open up your mouth to speak, because even a dog can wag its tail when it passes you on the street."

That phrase sounds simple, but it's been a guidepost for me and the foundation of who I am.

When you write an essay like this, you look in the mirror and see who you are and what makes up your character. I realized mine was cemented that day when I was 10 years old. Even then, I started to see that when I spoke to someone, they spoke back. And that felt good.

It's not just something I believe in; it's become a way of life. I believe that every person deserves to feel someone acknowledge their presence, no matter how humble they may be or even how important.

At work, I always used to say hello to the founder of the company and ask him how our business was doing. But I was also speaking to the people in the cafe and the people that cleaned the buildings, and asked how their children were doing. I remembered after a few years of passing by the founder, I had the courage to ask him for a meeting. We had a great talk. At a certain point, I asked him how far he thought I could in go in his company. He said, "If you want to, you can get all the way to this seat."

I've become vice president, but that hasn't changed the way I approach people. I still follow my mother's advice. I speak to everyone I see, no matter where I am. I've learned that speaking to people creates a pathway into their world, and it lets them come into mine, too.

The day you speak to someone who has their head held down and when they lift it up and smile, you realize how powerful it is just to open your mouth and say, "Hello."