Accessibility links
The Swimming Legend You Never Heard Of If not for a turn of history, Sunny Boy Kiefer would be included in an exalted group of swimmers, from Johnny Weissmuller and Buster Crabbe to Mark Spitz and Michael Phelps. Starting in 1935 when he was 17, Kiefer set backstroke records just about every time he jumped into the pool.

Listen
The Swimming Legend You Never Heard Of 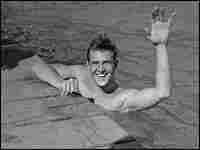 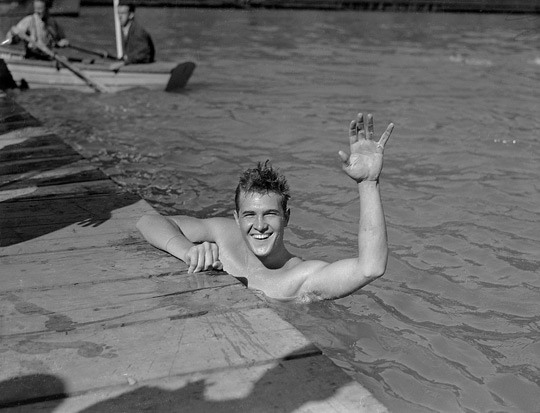 In the whole history of the Olympics, only four American swimmers have achieved lasting celebrity. Johnny Weissmuller and Buster Crabbe went on to Hollywood as Tarzan; Eleanor Holm, gorgeous and notorious, starred in the World's Fair Aquacade; and Mark Spitz won all those golds at Munich. But except for a little accident of history, Adolph "Sonny Boy" Kiefer would definitely have been included in that exalted group.

You've probably never heard of Kiefer. But that historical hiccup that interrupted his career was something called World War II. Starting in 1935 when he was just 17, he set backstroke records just about every time he jumped into the pool, climaxing his work by taking the only men's backstroke gold at the Berlin Olympics.

But more important, Kiefer didn't reach his peak for almost a decade later. Had there been the Tokyo Olympics of 1940 and the London games of '44, Sonny Boy Kiefer would surely have won them in a breeze. He'd be to the backstroke what Pablo Casals was to the cello.

But it was wartime, and Kiefer became a naval officer who helped write the guidelines that taught thousands of American sailors to swim. After the war, he started his own swimwear company. Among other things, he invented the nylon suit, which finally helped someone else break his Olympic record after 16 years.

Starting in the 1960s, Kiefer pioneered a program that saw the construction of public pools across his hometown of Chicago. Aquatics International magazine has called Kiefer "a combination of Thomas Edison, Abraham Lincoln and George Washington."

But then, it's really Edison, Lincoln, Washington and Charlie Chaplin. You see, for several years Kiefer also starred in a comedy act, the highlight of which was his race against a seal named Sharkey.

Kiefer, you see, is still very much alive. He's 90 years old, married for 67 years to Joyce. His "square" name is Adolph, which, unfortunately, has not been an especially popular moniker for some time. But precisely because of his name and his German heritage, another Adolph made a special effort to meet him in Berlin in 1936.

Yes, Hitler came by the pool and shook his hand, which, of course, he would not do for Kiefer's good friend Jesse Owens. Kiefer says: "If I knew then what I know now, I woulda pushed him into the pool."

Seventy-two years on, for this Olympics, the erstwhile Sonny Boy and his Joyce watch the swimming from Beijing every night. In the morning, he swims 45 minutes and then goes to his office at Kiefer & Associates. "I'm still a working man," he says.

Even now, Adolph Kiefer is still very much a work in progress.