Accessibility links
Disabled Group Calls For 'Tropic Thunder' Boycott In the new comedy Tropic Thunder, Ben Stiller plays an action movie star who once played a mentally disabled character. The actors use the word "retard" more than a dozen times. Timothy Shriver, chairman of the Special Olympics, says the word's use leads to suffering, injustice and exclusion.

In the new comedy Tropic Thunder, Ben Stiller plays an action movie star who once played a mentally disabled character. The actors use the word "retard" more than a dozen times. Timothy Shriver, chairman of the Special Olympics, says the word's use leads to suffering, injustice and exclusion.

A coalition of disability rights groups has called for a boycott of the new movie "Tropic Thunder." Yesterday, protesters gathered outside the premiere in Los Angeles, holding signs that said, Ban the Movie, Ban the Word, and the R Word is Hate Speech. They're talking about the word retard.

"Tropic Thunder" is a satirical spoof on the excesses of Hollywood. Ben Stiller plays a struggling action star. In hopes of winning an Oscar, he took on a different sort of role, a mentally disabled character called Simple Jack.

In this scene, Ben Stiller talks about that role with co-star Robert Downey Jr.

Mr. BEN STILLER (Actor): (As Tugg Speedman) There were times, when I was doing Jack that I actually felt retarded, like really retarded.

Mr. STILLER: (As Tugg Speedman) In a weird way, I had to sort of just free myself up to believe that it was okay to be stupid or dumb.

Mr. DOWNEY JR.: (As Kirk Lazarus) To be moronical.

Mr. STILLER: (As Tugg Speedman) Yeah. When I was playing the character…

Mr. DOWNEY JR.: (As Kirk Lazarus) When you was the character.

Mr. DOWNEY JR.: (As Kirk Lazarus) Yeah. It's like working with mercury. It's high science, man, it's art form.

Mr. DOWNEY JR.: (As Kirk Lazarus) You an artist.

Mr. STILLER: (As Tugg Speedman) Hmm. It's what we do, right?

BLOCK: Well, Timothy Shriver calls that hate speech. Shriver is chairman of the Special Olympics. He says the movie is an affront to dignity, hope and respect. And he is calling for a boycott.

Timothy Shriver, welcome to the program.

Mr. TIMOTHY SHRIVER (Chairman, Special Olympics): Thank you. Nice to be with you.

BLOCK: Help us understand why you think the word retard qualifies as hate speech?

Mr. SHRIVER: Well, look, for generations, in fact, throughout history, people with intellectual disabilities have been excluded from communities, from family life, from religious institutions, from schools. The ways in which they're excluded, the reasons for that exclusion, stems from the attitude that most people feel they're worthless, that they don't have value, that they can't contribute. This word has come to mean all those things. It's not any longer funny to perpetuate that stigma because it leads to enormous suffering, exclusion and really, injustice.

BLOCK: You have spoken with executives at DreamWorks, telling them about your objections. What did they tell you?

Mr. SHRIVER: Well, they, I think, said first of all that they didn't understand. That - and I think in good faith, they pulled down the Web site and eliminated some of the offensive material and the marketing materials like, you know, Never Go Full Retard or Once Upon a Time, There was a Retard. I think they have the capability - I know they have the capability, and I think they have the intent of trying to overturn the ill that's being perpetrated by this film in the future. But for now, we are on different sides of the opinion ledger on this one.

BLOCK: A spokesman for DreamWorks, which is putting out the movie, says, look, it's an R-rated comedy. It's by nature that comedies like this push boundaries. And this is a satire; they're mocking actors and the lengths they'll go for a role. It's the actors themselves who are being mocked, not the group in question, not the mentally disabled.

BLOCK: You mentioned the N-word. But, you know, in that scene that we just played a clip from, Robert Downey Jr. is playing an actor who surgically dyes his skin black for a role. Isn't that just as offensive or maybe more so?

Mr. SHRIVER: You know, I haven't seen those sequences in the film, so I don't know. But I do know that people who are sensitive to these issues from an African-American perspective have seen it. And my understanding is changes were made. The N-word is used once in this film. The word retard is used 17 to 20 times. It's just disproportionate. This is the most vulnerable population struggling every day for inclusion, for respect and dignity. The primary obstacle they face is the misunderstanding and mockery of society. If you want to pick on somebody, there's other people that you could pick on.

BLOCK: You mentioned that you haven't seen the movie "Tropic Thunder." Do you plan to see it so that you can be fully informed?

Mr. SHRIVER: I don't. You know, I very much wanted to see it in the last 10 days. And just the studio was not able to make a connection with me that would enable me to see it. Many of our coalition did see it. I've seen enough on the Internet. I've seen enough of the scenes. I recognize that some people will hear in that, well, if you don't see the movie, how can you judge? But I've seen enough and the - I don't think anyone from our community who's seen it has been anything other than disgusted. And so, I really don't feel any special need to see it myself.

BLOCK: Well, Timothy Shriver, thanks for being with us.

Mr. SHRIVER: Thank you for listening.

BLOCK: Timothy Shriver is chairman of the Special Olympics. 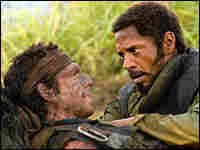 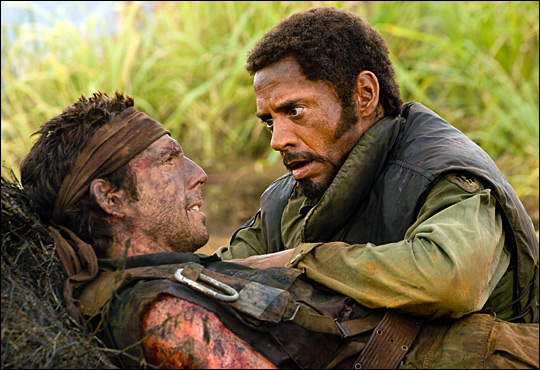 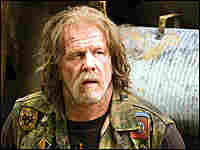 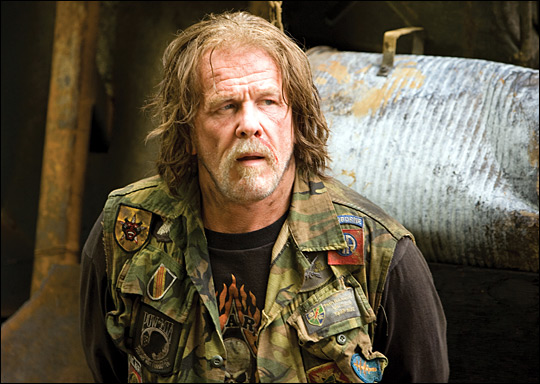 Trapped on the set of a big-ticket Hollywood adaptation of his Vietnam War memoir, John "Four Leaf" Tayback (a snarling Nick Nolte) is not a happy man: Somehow, less than five days into production, the project is already a month behind schedule. The gnarly soldier's solution: Take the "pansy-ass actors" into the jungle and abuse them until they cough up something like a convincing film.

If it's not exactly original, it is loud and cocky — and that's usually enough to power a would-be box-office heavy through a summertime opening weekend.

And anyway, that premise adds up to something like a pre-emptive strike: Tropic Thunder is making fun of an industry that makes movies like ... well, like Tropic Thunder. So if you think it's too bloody, too annoying, too nonsensical, well, good for you: That's exactly what it means to be.

It's nothing if not arch, with Stiller front and center as yet another version of his patented neurotic-loser character. His Tugg Speedman is a fading, franchised action hero: "Here we go again, again," Tugg announces in a coming-attractions come-on for the sixth iteration of Scorcher — one of several smart-ass "trailers" that open Tropic Thunder with something like a bang.

Tugg has failed to jump-start his career by playing what he refers to as a buck-toothed "retard" in Simple Jack (a patently offensive venture). Now, Tugg has signed on for Tayback's grunts-in-the-jungle movie, where he's competing for screen time with much-awarded Australian star Kirk Lazarus.

(To ensure that this bit of patent offensiveness has a context, the Tayback epic also features an actual black actor, a raucous rapper hawking his energy drink — "Booty Sweat" — and aspiring to movie stardom. Broad reaction shots from Alpa Chino, played by Brandon T. Jackson, regularly remind you that the movie knows Downey/Lazarus/Osiris is a joke.)

Likewise, the desperate efforts of the project's third star to score some drugs — apparently any sort will do — help reinforce his easy-target status: egomaniacal comedian Jeff Portnoy (Jack Black) is fresh off a franchise in which he plays every member of the incessantly farting "Fatties" family. Oh, the hilarity.

For one reason or another, all the guys — including the blockbuster's beleaguered director (Steve Coogan) and the earnest newbie actor (Jay Baruchel) whose name "Tugger" can never remember — agree to Tayback's scheme, heading deep into the Southeast Asian jungle, where they hope to "get into character."

Instead, they run into the sort of outrageous trouble you'd expect, including a ferocious 12-year-old druglord, Tran (Brandon Soo Hoo), who just happens to adore Simple Jack. Sans cell phones or actual weapons, armed with only a shot list and rudimentary map, the actors must learn to be men.

While they get lost, the guys in L.A. — and the movie is all about guys, even more emphatically than Stiller's flat-footed fashion-biz satire Zoolander — anticipate big returns.

Tugg's fast-talking agent (Matthew McConaughey) thinks his most pressing contract issue is the fact that his man has no TiVo — until he and fat, bald, cigar-chomping producer Les Grossman (Tom Cruise) hear from Tran, demanding a ransom the studio won't pay. Les explains his cost-benefit analysis: "They'll kill him, and we will weep. In the press."

We get that the movie industry is heinous — in Tropic Thunder, we get that early and often. We also get that actors are not real men, that agents are girlie men, and that Les (via Cruise's much-hyped, but hardly revelatory performance) is a gross man.

What we don't get is how all this adds up to a movie much different from those Tropic Thunder means to send up.