Accessibility links
Cindy McCain: Private Heiress And Philanthropist Cindy McCain devotes her time to charitable causes and to supporting her husband's bid for the presidency. The wife of Republican Sen. John McCain won't comment on her family business, — a beer distributorship — or her fortune. 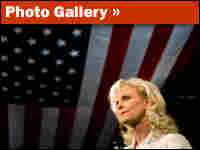 See A Slideshow Of Cindy McCain

Read about Cindy McCain's half sister and how she was "angry" she wasn't originally mentioned in this profile. 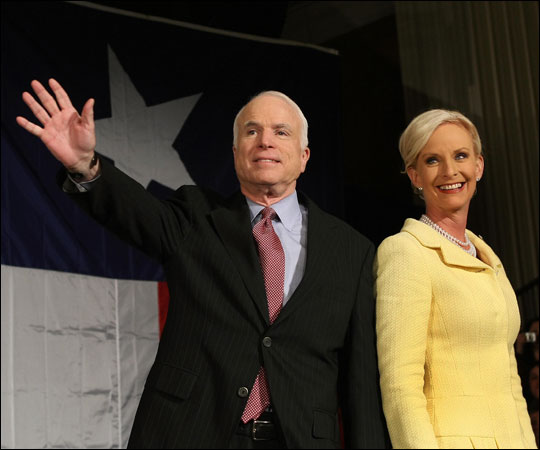 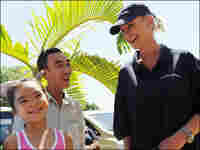 Cindy McCain meets with 11-year-old Le Thi Phuoc and her father, Le Van, in Vietnam in June. McCain helped arrange for Phuoc to get surgery in the U.S. for her cleft palate. Hoang Dinh Nam/AFP/Getty Images hide caption 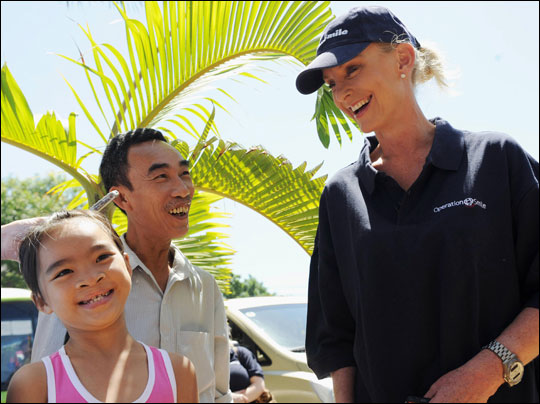 Cindy McCain meets with 11-year-old Le Thi Phuoc and her father, Le Van, in Vietnam in June. McCain helped arrange for Phuoc to get surgery in the U.S. for her cleft palate.

As the wife of Republican presidential hopeful Sen. John McCain, Cindy McCain has a high public profile and she's often at her husband's side.

But she is also heiress to the Hensley and Co. beer distributorship in Phoenix. And when it comes to the family business, Cindy McCain resolutely refuses to comment.

"I don't think I'm very mysterious," she said on ABC's Good Morning America. "I'm not the candidate. I've never been front and center. I do the things I enjoy and that are important to me. And [I] do them in the way I like to do them."

Hensley and its board's chairman, Cindy McCain, declined to participate in this story. The company, which distributes brands including Bud Light and Budweiser, has a 60 percent share of the Phoenix market and had $370 million in revenues last year.

McCain's father, Jim Hensley, founded the beer business in 1955. He built it into the third-largest Anheuser-Busch distributorship in the country. When he died in 2000, he left it to McCain.

Cindy Hensley met John McCain more than 20 years earlier at a party in Hawaii. He was a 43-year-old naval officer, married at the time. She was 25. They married a year later — in 1980 — and they signed a prenuptial agreement, which was fairly rare at the time.

The agreement has never been made public, but tax attorney Lee Sheppard, who writes for the nonpartisan publication Tax Notes, says there could only have been one reason for the prenup: Cindy had money and John didn't.

"She was an heiress ... who was marrying, and she was very young at the time," Sheppard says. McCain was "an old military guy who didn't have a job and went to work for the father-in-law right after they got married."

John McCain's job with Hensley didn't last long. In 1982, he ran for Congress, financing his campaign partially with loans from Cindy. After he won, Cindy McCain went with him to Washington, D.C. She left two years later because she was homesick for Arizona.

The McCains have always filed separate tax returns. That was a problem earlier this year, when Cindy McCain refused to release her return.

"This is a privacy issue. My husband is the candidate," Cindy McCain told NBC's Ann Curry. "I'm not the candidate."

This year, McCain has benefited from holding stock in Anheuser-Busch, which is being acquired by Belgian brewer InBev. Her family also owns a stake in the Arizona Diamondbacks baseball team.

Congressional financial disclosure forms list the McCains' assets together, making John McCain the third-richest member of the Senate. But Sheppard says Congress devised the forms so they don't offer much detail, either.

"The federal financial disclosure [form] says things like, well, are you worth somewhere between $1 million and $100 million?" she says. "In her case, it doesn't tell us much, because family businesses don't have to be valued, and Hensley is a family business."

Sheppard says that despite Cindy McCain's privacy protest, businesses have interests that ought to be scrutinized.

Hensley and company executives have lobbied the federal government on a number of issues, including successfully opposing rules to put alcohol content on beer labels.

When he was chairman of the Senate Commerce Committee, John McCain recused himself from alcohol-related issues. If he's elected president, recusal will not be an option. The campaign says McCain will deal with that if he's elected.

A Passion For Philanthropy

Cindy McCain is Hensley's chairman, and she's not involved in day-to-day operations. Those who know her say what she truly enjoys is philanthropic work.

She had her own charity providing emergency medical care to children, but it disbanded in the mid '90s after McCain admitted she illegally obtained painkillers from that charity for a back problem. Now, she is active in three charities.

As recently as this spring, she traveled to Vietnam with Operation Smile, a charity that provides surgery for children with facial deformities.

"Cindy always scrubs and goes into the operating room," says Vonnie Wray, the organization's development director. "She's very, very hands on with comforting the parents who are anxious — and perhaps shows them pictures of her own daughter."

The McCains adopted a child with a cleft palate, Bridget, who is now 16.

Through much of the 1990s, Cindy McCain stayed out of the public eye, raising four children at home. Now, as when her husband first ran for president in 2000, Cindy McCain is at his side. She supports his career — and doesn't reveal too much about her own.

The story said Cindy McCain's father, Jim Hensley, left his company to "his only child." In fact, Hensley was also survived by a daughter from a previous marriage, Kathleen Anne Hensley Portalski.