Accessibility links
Esperanza Spalding, Kate McGarry In Concert Since it opened in 1989 overlooking the Boston skyline and the Charles River, Sculler's Jazz Club has been home to top-rated and up-and-coming artists. JazzSet reprises sets from two remarkable women who are bright sparks for the future of jazz: Kate McGarry and Esperanza Spalding. 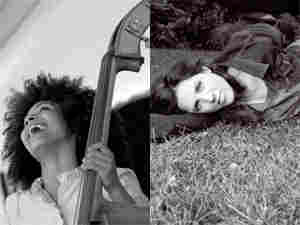 Kate McGarry's vocals are supple, finely nuanced and prone to blues inflections and breezy, daring improvisations. But her view is broader than just jazz — and, as you'll hear, she writes engaging songs of her own. McGarry's current CD is The Target, and its follow-up, If Less Is More, Nothing Is Everything, comes out soon.

McGarry, one of 10 children in an Irish family, grew up singing in Hyannis, Mass. At the University of Massachusetts in Amherst, she studied with saxophonist Archie Shepp and African music specialist Horace Boyer. Then she worked for a while in Los Angeles and put out her debut CD, Easy to Love. After a couple of years studying and teaching music at an ashram, McGarry moved to New York City in 1999. Her CD Show Me caught the ear of Palmetto Records, and the label selected it in 2003 to be its first vocal album. Pianist and composer Fred Hersch included McGarry in his presentation of his well-received score for Leaves of Grass by Walt Whitman. She is part of Luciana Souza's enterprising vocal group Moss, as well as the Jazz Drama Program, which presents plays that teach children and young adults about the blues and jazz in New York.

Esperanza Spalding graduated from Berklee College of Music in 2005. She's bursting with talent as a singer, a composer and a bassist, and her facility and big tone have led to her advanced placement in the jazz scene. Now promoting her new CD, Esperanza, Spalding has appeared on the cover of Jazz Times and played on David Letterman and Jimmy Kimmel's late-night shows.

Spalding was born in 1984 in Portland, Ore. She was mostly home-schooled, and when she entered high school, she was unhappy. But it was there that she picked up a bass, and it gave her life direction. She did some touring and recording with pop and hip-hop bands, but a full scholarship — plus travel money raised by some of her friends — pulled her east to Berklee College of Music, where she now teaches. Among her many accomplishments, Spalding won the Boston Jazz Society scholarship for outstanding musicianship in 2005 and made her JazzSet debut in Joe Lovano's band.

Thanks to Fred Taylor of Sculler's, as well as field producer Steve Schwartz and recording engineer Alan Mattes of WGBH Radio Boston.

Album
If Less Is More...Nothing Is Everything
Artist
Kate McGarry