Accessibility links
Dolphin Kick Gives Swimmers Edge If you've been watching the Olympics, you've probably seen swimmers finishing dives and coming off turns with a whiplike underwater kick. The so-called dolphin kick can give swimmers an extra surge in the water.

Learn How The Kick Works

On Friday, Michael Phelps plans to swim for another gold medal at the Beijing Olympics. When he does, watch his feet in those underwater camera shots. He kicks like a dolphin at the start of his races and at the turns.

The kick is one reason why the American star is better than most other swimmers.

In last year's world championships, Phelps shattered the world record in the 200-meter freestyle race, beating out Pieter van den Hoogenband of the Netherlands by a length and a half.

Until the final turn, the race between Phelps and van den Hoogenband was much closer. But Phelps came out of the turn underwater, undulating his outstretched body like a whip.

NBC swimming analyst and Olympic gold medalist Rowdy Gaines had been watching Phelps and his technique for years.

"He's one that can hold that kick longer than anybody else, especially in that last turn," Gaines said. "... Everybody's popping up to the surface, and he's still underwater taking that dolphin kick. That's his most dangerous weapon."

An Explanation In Fluid Dynamics

That dolphin kick has actually been the subject of scientific study by an expert in fluid dynamics.

Rajat Mittal, a professor of mechanical and aerospace engineering at the George Washington University, was studying dolphins for the U.S. Navy five years ago.

"We were asked to understand how fish swim so efficiently," Mittal says, "and it seemed like a natural extension to apply this to human swimming."

So Mittal and his colleagues contacted USA Swimming and learned that the group had the same interest, especially when it came to the dolphin kick.

They decided to "essentially compare these swimmers to the dolphin, assuming that the dolphin is the ultimate swimmer," Mittal says. "And the thing that we found is that Michael [Phelps] is able to use his body in a way that is very, very different from the other athletes, and also seems to be much closer to dolphins than we have seen for any other swimmer."

"It seemed pretty obvious to me that kicking underwater seemed to be a lot faster than swimming on the surface," Berkoff says.

That's because there's turbulence and air on the surface of the water, and they create resistance. The "Berkoff Blastoff," as it was called, was used at the start and after turns, with long stretches of that underwater undulating kick.

Berkoff won four Olympic medals with the kick, which others applied to other strokes. Swimming officials eventually imposed a limit of 15 meters underwater.

It's All In The Feet

Many use the kick now, but none as efficiently as Phelps, in part because of his size 14 feet, researcher Mittal believes.

"Almost 90 percent of all the thrust is coming from the foot," Mittal says. "And the flatter, bigger your foot is — essentially the bigger paddle you have. And that's one of the reasons the fish always beat us — because they have extremely large flukes. Michael's foot size, I'm sure, plays a big role in his ability to swim very well."

Mittal's studies also show that Phelps undulates his feet and body more — and with more flexibility — than 50 other swimmers he's observed. Phelps also is able to hold his breath longer, Gaines says.

"The best swimmers in the world can't go that far," Gaines says. "They do the dolphin kick, but they can't go far because they've got to take a breath. And Michael's lungs are so powerful that he's been able to use that as his final weapon off that last turn."

It's a weapon credited in part for five gold medals and five world records in Beijing. Phelps and his dolphin kick are entered in three more Olympic events.

Dolphin Kick In The Olympics 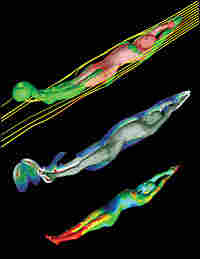 A computer simulation shows how water flows over the swimmer's body. Rajat Mittal/Center for Biomimetrics and Bioinspired Engineering at The George Washington University hide caption 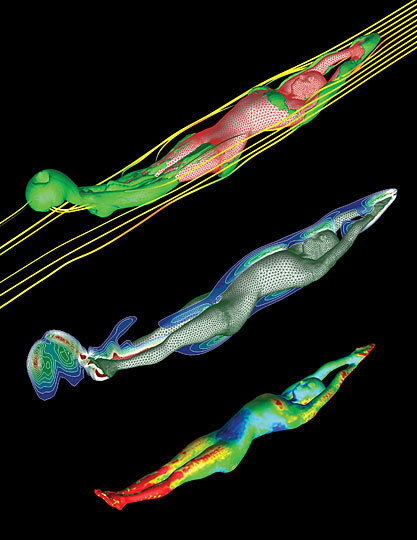 A computer simulation shows how water flows over the swimmer's body.

One of the many contributing factors to Michael Phelps' success in the Olympic pool this week is his use of the dolphin kick, the undulating, wavelike motion he makes underwater.

Researchers at The George Washington University have been studying the mechanics of the kick in creatures such as fish and dolphins since 2003, and they have been applying that knowledge to human swimming.

Dr. Rajat Mittal, a professor of mechanical and aerospace engineering at GWU whose specialty is in fluid mechanics, says it seemed like a logical extension to apply his research to human swimming. In collaboration with USA Swimming, Mittal and his graduate students created models and simulations of elite swimmers to study how and why the kick works so effectively.

At a fundamental level, Mittal says, an object will experience different types of drag as it moves through the water.

Mittal says swimming underwater is the fundamental secret of why the dolphin kick is so effective: The more a swimmer can swim below the surface, the more efficient he or she can be.

A swimmer can control various factors, Mittal says, including the frequency of the kick and its amplitude, or height.

But how the athlete moves his or her feet in the water is most important, Mittal says. "Our simulations and animations have shown that almost 90 percent of all the thrust — the propulsion — for the swimmers is coming from the part of the foot beyond the ankle."

A flatter and bigger foot provides more thrust, and Phelps' size 14 feet certainly help him. Mittal has studied underwater video that shows Phelps is able to hyperextend his ankle beyond the point of a ballet dancer. This flexibility provides Phelps with a tremendous advantage, because a swimmer wants to whiplash his feet for maximum thrust.

Mittal and a team of graduate students obtained digital full-body scans of two elite swimmers, Gabrielle Rose and Lenny Krayzelburg, and animated the models with software (the same kind frequently used for animating characters in feature films such as Shrek).

After a two-day process of superimposing the computer model frame-by-frame onto video of the real swimmer, the animated swimmer data is put into a fluid dynamics simulation. The computations are so complex, Mittal says, they run on a supercomputer for 1.5 months.

Computer-simulated animation of a male swimmer