Accessibility links
Inside The Nation's Largest Mental Institution The largest mental institution in the U.S. is actually a wing of Twin Towers, an L.A. County jail. The sheriff says it doesn't make sense to incarcerate the mentally ill, but as long as it's the only option, he's trying to make it work.

This is the second in a three-part series.

Twin Towers houses the largest mental institution in the U.S. This is one of the two matching "towers." Courtesy Twin Towers hide caption 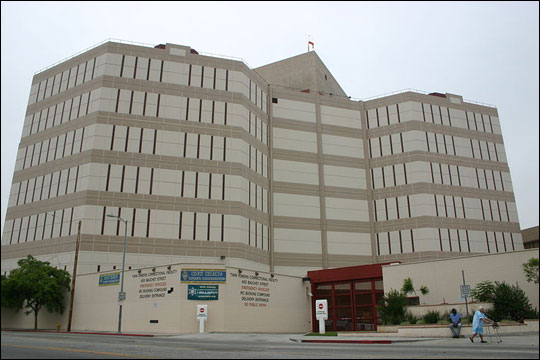 Twin Towers houses the largest mental institution in the U.S. This is one of the two matching "towers."

In the first part of this series, we look at the fastest-growing population in U.S. prisons: women.

The largest mental institution in the country is actually a wing of a county jail. Known as Twin Towers, because of the design, the facility houses 1,400 mentally ill patients in one of its two identical hulking structures in downtown Los Angeles.

On a recent morning, we took a visit to the floor devoted to the "sickest of the sick." As we arrived, a dozen deputies were working to restrain a patient and inject him with an anti-psychotic drug. The entire ordeal was videotaped — to protect the patient as well as the deputies. It was the first hint at the complexities that emerge from creating a mental hospital inside a jail.

The End Of Public Mental Hospitals

Until the 1970s, the mentally ill were usually treated in public psychiatric hospitals, more commonly known as insane asylums.

Then, a social movement aimed at freeing patients from big, overcrowded and often squalid state hospitals succeeded. Rather than leading to quality treatment in small, community settings, however, it often resulted in no treatment at all.

As a consequence, thousands of mentally ill ended up on the streets, where they became involved in criminal activity. Their crimes, though frequently minor, led them in droves to jails such as Twin Towers, says Los Angeles County Sheriff Lee Baca.

"Incarcerating the mentally ill is not the right thing to do," he says.

But if they are housed in Twin Towers, Baca says he is determined to make sure they are treated for illness.

Waking Up To A Big Bowl Of Ants

Mornings at Twin Towers begin with a meeting of medical staff from the county's Department of Mental Health; case workers and guards, who often function as de facto case workers, sit in a large circle.

An inmate who won't eat is the first order of business on this particular day.

"He says there are ants in his cereal," a case worker explains.

Dr. Arakel Davtian, one of the psychiatrists sitting in this large circle, takes a moment to explain just who they are dealing with; about half those locked up at the Twin Towers are in for serious crimes, he says.

What he finds striking, however, is how little it takes for the other half to end up there: "Indecent exposure, having open containers, something very, very minor — peeing on the street, disturbing the peace."

Often, the crimes these people commit are the result of their mental illness, Davtian says.

He offers the example of an inmate who was arrested for false identity. The police asked him his name, and he gave them a series of different ones.

"In court he does the same thing — he talks gibberish; the judge said [he is] incompetent to stand trial. The next court date is six months from the time he got arrested."

This means at least half a year at Twin Towers. Although being locked up is not the ideal way to enter treatment, Davtian says something good did come out of the altercation: he's begun treating the man for schizophrenia.

In Search Of Treatment

Some of the inmates at Twin Towers say they are glad to get treatment. Scott, 21, was incarcerated for shoplifting. He didn't want to give his last name, but he says he's aware he has "mental problems, mostly caused by life."

"I got ran over when I was 7," he says. "I'm schizophrenic-paranoid. I think everyone is watching me. I think I'm being judged, which is kind of true and kind of not."

Not everyone is so open to treatment. An inmate named Lawrence (Twin Towers requested his last name be withheld for privacy reasons) says he was picked up for stealing sweaters out of a car on a very cold day.

"In order to get a lesser charge, I pretended I was nuts. So ever since then, I've been hooked up with the mental facilities."

Claiming to be crazy is a problem here. There is a perception that life in the "insane" tower is easier than life in the "sane" one — partly because the cells in the mental health side are newer than cells in the other side. Consequently, inmates are carefully screened before they are admitted to the psychiatric wing.

When I ask Lawrence what he's going to do when he gets out, he offers, "I have some friends, Mr. Carl Icahn, he's a billionaire ... I've got some money, lots of money. I've been working with him since 1968, helping him build his empire, so I'm gonna go back there. Just live good."

The "crazy wing" of Twin Towers may look like a greener pasture to those in the other wing, but it's still an unsettling sight.

Walking into the "high observation" area, patients stare out through the glass walls of their cells, many nearly naked.

Across the way, about a dozen inmates are engaged in a "socialization" exercise. Some participants are chained to benches — "for civilian workers' safety," as Hong explains it. Others sit listlessly at tables, in long draping ponchos that deputies refer to as "suicide gowns."

"They can't rip it," explains Hong. Clothes can prove dangerous tools to a depressed or paranoid inmate.

It shouldn't be this way, Baca says.

"They're here, and they're going to be cared for, but is this what we want in the way of a policy? Are we saying the legal system is the solution for the mentally ill in L.A. County? I don't think so. I'm saying criminals belong in jail, not the mentally ill."

Baca has been saying this since he took over Twin Towers a decade ago. And the mentally ill just keep coming, filling up the hospital to maximum capacity.