Accessibility links
Beaux Arts Trio Bids Farewell At Tanglewood Led by founding member Menahem Pressler, the Beaux Arts Trio performs an emotion-laden final U.S. concert at the Tanglewood Music Festival in Massachusetts, the venue where the ensemble got its start 53 years ago. 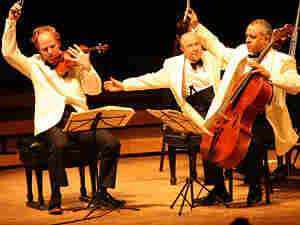 Live at the Library

Beginning with the Beethoven performance below, The Beaux Arts Trio gave more than 100 concerts at the Library of Congress in Washington, D.C., over the course of five decades. Enjoy this sampling of some of the group's memorable moments.

Ravel: Trio in A Minor

courtesy of Library of Congress

Schubert: Piano Trio No. 1 in B-flat

Schubert: Piano Trio No. 2 in E-flat 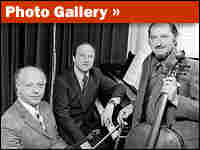 See a photo gallery of the Beaux Arts Trio over five decades.

This Spring, Beaux Arts violinist Daniel Hope recorded these audio diaries on the road, as the group bid farewell to some of its favorite U.S. cities.

Toronto: The flight of the cello

After a dominating 53-year run, the Beaux Arts Trio has decided to break up. It will play its final U.S. concert at the Tanglewood Festival -- the very location where the venerable ensemble gave its first public concert on July 13, 1955.

At 84, pianist Menahem Pressler, the soft-spoken but strong-willed founder of the group, says he has no intention of retiring.

"I had, and I still do have, an enormous hunger for music," he told Performance Today host Fred Child in a recent interview. Pressler has concerts and projects spread out over the next several years, and he maintains a full teaching schedule at the Indiana University School of Music in Bloomington.

There's plenty to keep the other Beaux Arts Trio members busy, too. Young enough to be Pressler's grandson, 35-year-old violinist Daniel Hope has a booming career: With a hectic concert schedule, an impressive recording contract, a book out and a music festival to run, Hope and his success have been among the factors in the group's breakup. Cellist Antonio Meneses' solid career was launched in the 1980s, when he began winning awards and making records with legendary conductor Herbert Von Karajan.

As in the start of many classical music careers, the Beaux Arts Trio first grabbed the spotlight by filling in at the last minute. The group was asked to play a series of concerts at what was then called the Berkshire Music Festival after another ensemble called in sick. The Berkshire performances were so successful that the new trio found itself with a date book filled with 70 concerts.

Like any jazz or rock band, the group hit the road, playing in small towns and high-school auditoriums. Some audiences barely knew what a piano trio was. The group had to quickly hone its sound.

"We had to go through this process of rubbing stones together until fire came out," Pressler says, "until it was smooth; until the stones fit."

The Beaux Arts Trio was, at that time, Menahem Pressler, piano; Daniel Guillet, violin; and Bernard Greenhouse, cello. The group's sound, even in those early years, was praised for its beauty of tone, sense of style and cohesiveness.

The first original member to leave the trio was Guillet. Older than the others, he was ready to retire in 1969, and was replaced by Isidore Cohen.

"Izzy was a very excellent musician," Pressler says. "Always prepared, with an intense love for chamber music, and with a beautiful, natural sound. With Izzy, the French sheen became a little more Russian in its sound. But the search for that elusive inspiration continued."

Pressler's curious musical mind -- and that continuous search for inspiration -- has kept the trio's sound vital, even as he welcomed each new member into the group.

With Guillet gone, Pressler guided the Beaux Arts Trio into its next era. With Cohen firmly in place, the group toured more, demonstrating its insatiable appetite for the entire piano-trio repertoire and beyond. Along the way, record-store bins bulged with the trio's recordings, and composers began writing pieces for the group.

Greenhouse, in 1987, was the next original member to leave; his replacement was cellist Peter Wiley. Cohen stepped aside in the early 1990s when Ida Kavafian joined. Wiley and Kavafian both quit the trio in 1998.

"Then there was a time in the trio which was more or less a holding pattern," Pressler says. "Then, to my exhilarated pleasure, I started the group again with Antonio Meneses -- an absolutely great cellist -- and Young Uck Kim, a great violinist."

The critics were thrilled, but just three years into his tenure, Kim bowed out with an injury in the middle of a tour. Enter British violinist Daniel Hope. Pressler had never heard of him, but the 29-year-old Yehudi Menuhin protégé was dispatched to Basel, where he rehearsed with Meneses; then it was off to Lisbon to meet Pressler.

"I found him wonderful, and a sponge,who took in everything about the trio," Pressler says, adding that there was something in Hope that reminded him of his younger self in those early years.

"By his way of behaving and playing, by his way of being what he is, he made me able to rehearse five, six hours a day," he says. "I had the energy, the desire, the love. And so I had these two guys, being successful soloists, wanting to play trio music like trio players. And so, all of a sudden, I had the Beaux Arts Trio back again."

Soon, critics were again overjoyed with the newest incarnation of the Beaux Arts Trio. The Washington Post's Tim Page wrote of Pressler: "The tone he summons from the piano is sumptuous, bejeweled and seemingly effortless ... Nor did Pressler's colleagues let him down. Hope plays with a welcome mixture of dignity and songful sweetness, while Meneses is an elegant and soulful cellist with a tone of slate-gray velvet."

Menahem Pressler grew up in Nazi Germany, in the northeastern town of Magdeburg.

"I found a very kind piano teacher," Pressler says, "who taught me even at a time when it was forbidden to have a Jewish boy coming for a lesson."

Most of Pressler's relatives did not survive the Holocaust. He and his parents were lucky enough to get out. In 1939, they left for a "vacation," and somehow the German border guards let them cross into Italy, where they eventually caught one of the last boats from Trieste to what was then called Palestine. As a teenager, Pressler says he saw people losing jobs and friendships; some disappeared altogether. He didn't understand what it all meant, but he had a terrible feeling.

In Palestine, Pressler found teachers: a Russian who had studied with the influential Max Pauer and a German who was a pupil of Ferruccio Busoni.

After the war, in 1946, Pressler had his eye on the Debussy Piano Competition in San Francisco. He was told there were too many applicants, but he entered anyway -- and ended up with the top prize. It opened many doors for the young pianist, leading to a recording contract and a multi-year stint performing with the Philadelphia Orchestra under Eugene Ormandy.

A few years later, while living in Manhattan, Pressler had the idea to record some Mozart piano trios, but he didn't know a suitable violinist and cellist. Through a fellow musician in his Upper West Side apartment building, Pressler was introduced to Daniel Guillet and Bernard Greenhouse, the first chair violinist and cellist, respectively, of Arturo Toscanini's NBC Orchestra. Guillet had extensive experience playing chamber music, and led the Trio's rehearsal sessions with a combination of insults and insight.

Pressler describes those early sessions as "blood, sweat and tears" -- the kind of hard work necessary "to make three people think as one." The work paid off. It landed the Beaux Arts Trio that first gig, in Berkshire Hills of Massachusetts, and a 53-year run as one of the world's most durable and delightful chamber groups.