Accessibility links
Militancy Spills Over Into Pakistan's Swat Valley Not long ago, visitors from far and wide flocked to the sumptuous Swat Valley in northwest Pakistan. But these days, Swat — once seen as the 'Switzerland of Asia' — stands on the front line of a conflict between the Taliban and the Pakistani government's security forces. 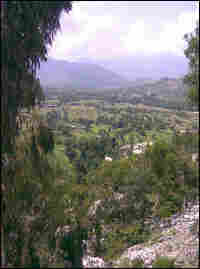 The Swat Valley in northwest Pakistan was once seen as the "Switzerland of Asia." Philip Reeves/NPR hide caption 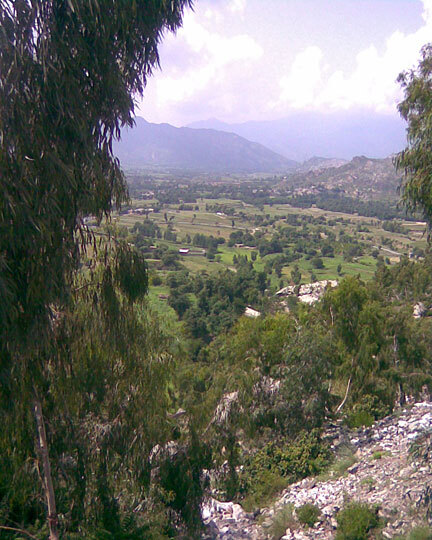 The Swat Valley in northwest Pakistan was once seen as the "Switzerland of Asia."

Swat is not far from the mountainous, semiautonomous tribal areas bordering Afghanistan, although it is part of so-called "settled" Pakistan, just a few hours' drive from the capital, Islamabad.

But Islamist militancy is spilling out of the tribal belt. These days, Swat — once seen as the "Switzerland of Asia" — stands on the front line of a conflict between the Taliban and the Pakistani government's security forces.

Not so long ago, visitors from far and wide flocked to the sumptuous Swat Valley, with its peach and apple orchards and trout-rich gushing mountain streams.

Now, most of the valley's nearly 900 hotels and restaurants are empty; 75 percent of them have closed, according to the local hotel association.

The world's attention is focused on the fate of Pakistan's President Pervez Musharraf. Speculation is growing that he will soon opt to resign, rather than be impeached by Pakistan's ruling coalition.

But in Swat Valley, people have more pressing worries.

Government officials are regularly assassinated. There are frequent shooting and bombing attacks on police — 86 in just over a year, according to official statistics. Nearly 100 girls' schools have been torched by the Taliban in the same period.

The Pakistani army launched an offensive in Swat Valley last year to try to clear out the militants, who are led by a radical cleric, Mullah Fazlullah. Fazlullah is widely known as the "FM Mullah" because of his illegal rabble-rousing radio broadcasts.

In May, a peace agreement was reached, but it later fell apart. The army has since launched what it calls phase two of its operations.

This means a nightly curfew. Sometimes, when it is moving troops, the military imposes curfews during the day, damaging the economy and deepening public resentment. Residents complain that during curfews, soldiers at checkpoints block the path of patients trying to get to hospitals.

Reeves says those he spoke to were unable to decide who they resented more: the Taliban, the Pakistani army or the U.S. for pumping hundreds of millions into what many believe is now the only thriving business in this part of Pakistan — war.