Accessibility links
Facebook Faceoff: German Rival Gets Poked The success of the social networking site Facebook has spawned knockoffs around the world. Now Facebook is poking back. Last month, it filed a lawsuit against Germany's top social networking site, saying that it copied the "look and feel" of Facebook. 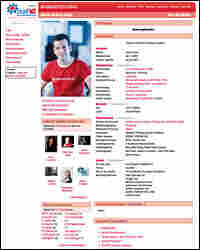 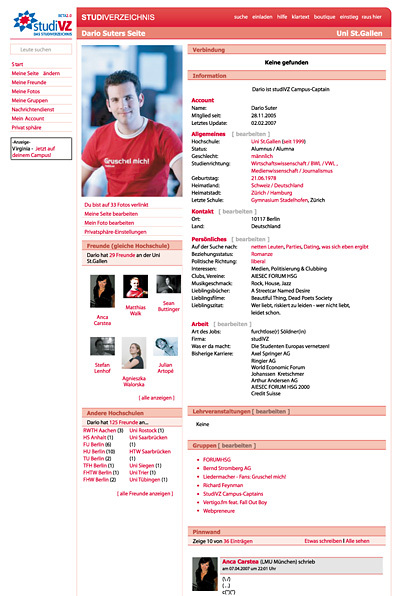 Facebook In Another Color? A sample profile page from the German social networking site studiVZ.

Fight For The Studenten:

Executives at the German site, studiVZ, say Facebook is just being a cyberbully.

StudiVZ is short for "studenten verzeichnis," or student directory. As with Facebook, it was designed to keep networks of students in touch. But that's not the only thing they have in common.

For instance, users' pages are broken into similar components, marked "my profile, my friends, my photos."

Gregor Hochmuth, a Web applications developer in Berlin who uses both Facebook and studiVZ, says the two sites share some remarkable similarities.

"StudiVZ hasn't changed its design" since it began, Hochmuth said. "So if you want to see what Facebook looked like about three years ago, you can go there. At the time, it literally was just Facebook copied in red."

In fact, studiVZ was launched in 2005 by German fans of Facebook. It quickly grew to a membership of about 10 million users in Germany, Austria and Switzerland. It was so successful that Facebook considered acquiring the site, but it was bought by a German publishing house last year instead.

Facebook was still determined to go after German Web users, one of the largest online populations in Europe. So in March, it launched a German version of Facebook. A few months later, Facebook filed its suit against studiVZ in a California court.

StudiVZ immediately hit back with a statement: "Now that Facebook, despite trying hard, has not been successful in the German market, the company seeks to obstruct studiVZ through court action. Their strategy appears to be: If you can't beat them, sue them."

If that is Facebook's strategy, it may be a difficult one to enact.

"The first difficulty they run into is, studiVZ is in Germany," said Anthony Falzone, who runs the Center for Internet and Society's Fair Use Project at Stanford Law School.

"So, Facebook has sued them here on the theory that by logging in to the Facebook site, they agreed to be subject to suit in California."

Falzone says the line between an innovation and a copy can be blurry. But he also says that it's important to remember that intellectual property rights are there to protect innovation.

"That's essential to healthy competition," Falzone said, "because it lets the person who executes the idea best win in the marketplace — and that protects a healthy, competitive marketplace."

In its defense, studiVZ was in Germany's market first. And even if the site took ideas from Facebook, Hochmuth says he grudgingly admires what studiVZ has pulled off — even though he dislikes what he calls "copy-and-paste" innovation.

"It's not easy to do a copycat" site, Hochmuth said. "It may look like an easy thing to do, but actually growing such a copycat is just as hard as building a company that's otherwise your own original idea."

Some say Facebook's lawsuit is a public relations move, aimed at drawing German users to its new site — which still has only a tenth of the membership of studiVZ. Whether or not that's the case, the lawsuit is a sign that Facebook sees its German rival as a serious threat, as it reaches out to users in other countries.

For its part, studiVZ has already exported its success, with Polish, French, Italian and Spanish versions of its service. And its site for non-students, meinVZ, is even available in Facebook's native tongue, English.