Accessibility links
Passport Backlog Blamed on New Requirements A new law that went into effect in January requires U.S. citizens to have a passport when traveling to Mexico, Canada and the Caribbean. The change created demand that is peaking now that spring break is here and summer looms.

A new law that went into effect in January requires U.S. citizens to have a passport when taking a plane to Mexico, Canada and the Caribbean. The change has created a huge demand that is peaking now that spring break is here and summer looms.

Part of the glut was due to new requirements for children and those traveling to places where previously only a birth certificate was needed. Now officials say that, just as they are catching up, they're bracing for summer travelers.

The State Department has waded through an unprecedented crush of applications, at the rate of more than 1 million per month.

Last week, the State Department issued a record 412,000 passports, the most ever in a seven-day period, topping a record set just the week before.

Even though the agency had geared up for the new law, passport centers were overwhelmed.

Processing times for standard applications jumped from eight weeks to three months or more, and the time for expedited applications — which cost an extra $59 — went from two weeks to four.

Maura Harty, the assistant secretary of state for consular affairs, says the department has hired extra staff to meet soaring demand. But she admits there still may be a few bugs in the system.

Harty suggests that travelers with questions e-mail through the State Department's Web site, or try calling its hotline (at 877-487-2778) during early off-hour times. But her best advice, she says, is to apply for passports as early as possible.

What You Need to Know About Passport Rules 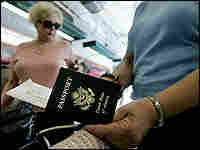 Travelers take out their passports before checking in at San Diego International Airport. As of January 2007, U.S. passengers traveling by air are required to show a passport when traveling to Mexico, Canada and the Caribbean. The requirement was waived until Sept. 30, for those who have applied for a passport. Sandy Huffaker/Getty Images hide caption

A list of documents you can currently use to travel.

In January, hopping on a flight to Toronto became more difficult.

According to new rules that went into effect in January, all flyers, including American citizens, are required to carry a valid passport or other "appropriate documents" when traveling into the United States from anywhere in the Western Hemisphere — including Canada, Mexico, Bermuda, the Caribbean and Central and South America. The requirement, however, does not apply to U.S. citizens returning from a U.S. territory — such as Puerto Rico and the U.S. Virgin Islands.

And for those who have applied for passports and have yet to receive them, the requirement has been waived until Sept. 30, 2007.

This plan, which took effect, in January, called the Western Hemisphere Travel Initiative (WHTI), was announced in April 2005. The changes in passport rules were mandated in 2004, when Congress passed a massive piece of legislation called the Intelligence Reform and Terrorism Prevention Act. In addition to reforming intelligence agencies, the act was designed to increase border protection and beef up transportation security.

More specifically, the act stipulated that the Departments of Homeland Security and State revamp their travel document requirements.

Travel by land and sea hasn't changed. A plan set to take effect as early as January 2008 will require that the same rules apply to these forms of travel.

Before that next big adventure to Canada or Mexico, check out this list of documents you can currently use to cross the border:

What It Is: The passport is still the golden ticket of world travel. U.S. citizens can use their passports when returning to the country by air from Canada, Mexico, Central and South America, the Caribbean and Bermuda. But not everyone has a passport. Only one-fourth of Americans have a passport.

How You Get It: To get a passport for the first time, you'll need a valid form of photo ID, such as a driver's license, proof of U.S. citizenship and two photographs of yourself. Take those to an approved acceptance facility — that includes post offices, some public libraries, federal, state and probate courts and some county and municipal buildings. If you are traveling within 14 days, you can visit one of 13 regional passport agencies, but you'll need an appointment. (Check out the State Department's site for more information.)

When to Use It: For travel from or to anywhere in the world, by air, land or sea.

What It Is: Proof of legal residency in the United States for non-U.S. citizens.

How You Get It: See the U.S. Citizenship and Immigration Service's Web site for details.

When to Use It: Permanent U.S. residents can still use their green cards when returning to the United States by land, air or sea in the Western Hemisphere.

What It Is: A card for travel between the U.S. and Canada only.

How You Get It: The card is already available, but only to citizens or permanent residents of Canada or the United States. You can apply for the NEXUS card by submitting an application and going through a registration process. If you satisfy the eligibility criteria and pass the risk assessments of both countries, you'll be issued a card.

When to Use It: You can use the NEXUS card for air travel in conjunction with the NEXUS air program at participating airports. Just insert the card at self-serving kiosks. You'll most likely also be able to use the card for land and sea travel between Canada and the United States, once those rules kick in.

What It Is: License to drive issued by your state of residency or the District of Columbia.

How You Get It: Check with your local department of motor vehicles.

When to Use It: U.S. citizens crossing the Mexican and Canadian border by land do not technically need any documentation to enter the United States. All they have to do is assert their U.S. citizenship. But if a border agent questions you, be prepared to show a driver's license. A birth certificate or voter registration card will also work as valid ID.

U.S. Military Identification: Soldiers on active duty who are traveling by land, air or sea on orders are exempt from passport requirements and can use their valid military identification instead.

Merchant Mariner Document (MMD): U.S. citizen merchant mariners can apply for this document with the U.S. Coast Guard. It allows them to return to the United States by air, land or sea from anywhere in the Western Hemisphere when on official business.

PASS CARD: This card is still just a concept under review by U.S. officials. If it does get developed, it would function as a cheaper alternative for U.S. citizens who do not wish to use a passport for travel only by land and sea between the U.S. and Canada, Mexico, the Caribbean and Bermuda.