Accessibility links
Amid China's Olympic Push, Public Recreation Lags China's gold medal haul increases by the day at the Beijing Olympics. But some residents say the host country's multimillion-dollar investment on behalf of athletes has come at the expense of sports facilities for the Chinese public. 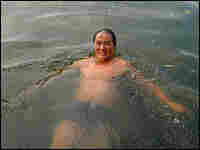 Swimmers in Houhai are proud of China's Olympic gold medals, but say they wish more money could be invested in sports facilities for ordinary people. Louisa Lim/NPR hide caption 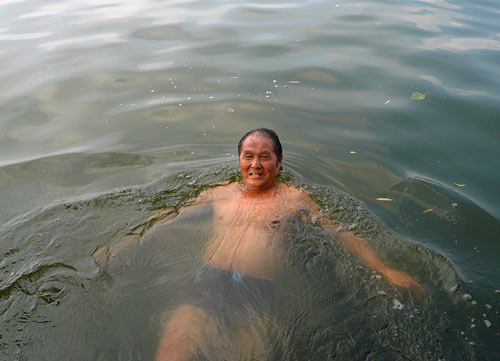 Swimmers in Houhai are proud of China's Olympic gold medals, but say they wish more money could be invested in sports facilities for ordinary people. 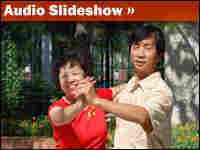 China's gold medal haul increases by the day at the Beijing Olympics. But some residents say the host country has spent millions on individual athletes at the expense of sports facilities for the Chinese public.

A 17th century poet, William Lathum, once compared the world to a tennis court "where fate and fortune daily meet to play." This holds true in today's China, where sport is generally the preserve of the elite, those with time and money. That's especially the case with sports that have been more recently introduced in China, such as tennis and golf.

"If you counted all the tennis courts in China, there are probably fewer than in New York state alone," says tennis fan James Peng.

"I belong to a tennis club, so it's cheaper for me," says Jiang Ying, 37, an avid tennis player. "But still I spend more than $300 a month booking courts."

Most Chinese parks boast an array of rudimentary exercise machines and pingpong tables, all extremely well-used. As the standard of living improves, exercise is becoming a bigger part of people's lives. The concept is still relatively new — physical education classes were added to the curriculum in 1992.

The government says it has spent $430 million in the past eight years on public sports facilities. That may sound like a lot, but consider that the sports administration budget for the year 2000 alone was nearly double that amount. And that money has been earmarked for training the elite athletes now snapping up China's numerous gold medals.

In a rare admission, Liu Guoyong from the General Administration of Sport told reporters, "Government resources aren't nearly enough to meet people's exercise needs." He added, "This shortage will remain for quite a long time."

The shortage is one reason for the existence of the Houhai Winter Swimmers Club in Beijing. It's an informal group of swimmers, many of them retired workers, who meet every afternoon to take a dip in the murky waters of one of Beijing's lakes. It's technically illegal to swim here, but authorities turn a blind eye to the swimmers, some of whom take their ritual dip even in winter when they must break the ice.

Finding A Place To Swim

"Although the water is dirty, it's very refreshing," says Shen Song, who works in the service industry. "Swimming is my hobby, and I like the freedom of swimming here."

It's certainly a picturesque place to wallow. The drumbeat of a dragon boat skimming across the lake echoes over the waters, as divers plunge in. The bathers here are proud of China's gold medals, but say they wish more money could be invested in sports facilities for ordinary people. There's speculation that the government may retool the sports system after the Olympics, but no one knows what changes are afoot.

"Each visit to the swimming pool costs $4," says Wang Yansheng, a 67-year-old retired worker. "And Chairman Mao called for us to swim in lakes and rivers. We're keeping fit and saving money. Sometimes when I'm really having a good time, I'll sing while I swim."

And with that he bursts into song, against the buzz of cicadas. He's beaming from the sidelines as the swimmers splash in the deep green waters under the weeping willows. This at least is one experience money can't buy.