This is the final installment in a three-part series.

In 2007, Texas spent 8.6 percent of its general funds on corrections, more than all but five states. Click below to compare all states. 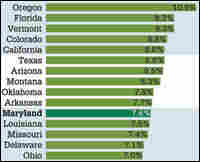 Compare states' spending.
Courtesy of The Pew Center on the States' Public Safety Performance Project, "One in 100: Behind Bars in America, 2008."

In the first two parts of this series, we meet some of the individuals adding to a growing incarceration rate.

In Dallas' DIVERT court, perpetrators tend to go by their first names.

"Anna? Where you at, Anna?" court officer Justin Alexander calls out, just as the session is about to begin.

The familiarity embodied in the roll call is a subtle clue to DIVERT Court's success. DIVERT, which technically stands for Dallas Initiative for Diversion and Expedited Rehabilitation and Treatment, also represents the program's focus on diverting individuals with minor drug offenses away from prison.

Established about 10 years ago, it's one of about 80 so-called problem-solving courts across Texas. With the state's yearly budget for corrections ready to surpass the $3 billion mark, DIVERT is looking like an increasingly promising model to keep people out of prison and save tax dollars.

After roll call, Judge John Creuzot, the driving force behind the initiative, enters the courtroom, stage right, robes flowing in his wake.

A Court With Close Interactions

Not your typical courtroom banter. There's a rare set of relationships here among criminals, court officials, judge, case managers and drug and alcohol therapists that's grounded in the repetition of seeing each other every week, often several times a week.

"Natasha, I'm glad you're here today because you're going to Phase Three," Creuzot announces to widespread applause. It's taken Natasha Stephens a year to get this far, and she returns to her seat, beaming at his praise.

"You proud of yourself — you were pretty damn mean when you first got here, girl," the judge says.

Stephens says she began drinking when she was 8 years old. By the time she was busted for possessing a gram of cocaine at age 21, she'd been addicted to cocaine and alcohol for years.

"All through my teens — couldn't even go to class," she explains.

Stephens was facing a felony conviction and up to two years in prison. But because it was her first arrest and the amount she was carrying was relatively small, she was a candidate for Creuzot's DIVERT Court.

Stephens soon discovered that diversion is not easy. Instead of doing nothing in jail, she had to meet with her case manager twice a week and attend Narcotics Anonymous and Alcoholics Anonymous meetings, because she had both addictions. There were intensive outpatient treatment sessions and drug tests.

Those who know something about alcohol and cocaine addiction probably won't be surprised to hear that one weekend, Stephens fell off the wagon and subsequently failed a drug test.

This is where the differences between the philosophy of DIVERT Court and the rest of the Texas criminal justice system become particularly apparent. Instead of kicking Stephens out of the program and sending her off to prison, Creuzot sent her to 45 days of intensive inpatient drug treatment.

Stephens says that changed her life.

Understanding just how close she was to a life of oblivion, Stephens dropped her know-it-all attitude and got serious about recovery. She's been sober ever since, with the drug tests to prove it.

"A person who relapses on drugs needs further treatment. Our responses are research-driven," he says.

The statistics back him up. Two studies by Southern Methodist University show that DIVERT Court cuts the recidivism rate by 68 percent over the regular Texas criminal justice courts. For every dollar spent on the court, $9 are saved in future criminal justice costs.

Creuzot says the next step is to expand these courts to include perpetrators of property crimes and to raise the possession limits. Currently, if you're busted with two grams of cocaine, for example, that's too much to qualify. Creuzot would like to see DIVERT expanded beyond first-time offenders.

The courts have been so successful that even the tough-on-crime, Republican-dominated Texas Legislature approves.

Rep. Jerry Madden (R-Plano), chairman of the corrections committee, says that instead of worrying about the expanding outflow from prison, he wants to choke off the inflow with DIVERT-type courts.

The expanding prison population is a financial red stain spreading across the state's books like the Andromeda Strain, he says. Each new maximum security prison costs Texas taxpayers $300 million to build and $40 million a year to operate.

State officials estimate that unless changes are made, Texas will need 17,000 more prison beds just four years from now. Releasing prisoners on parole is politically untenable — which makes "diversion" an increasingly appealing way to avoid what's looking like a $2 billion invoice.