Accessibility links
How The Only Coup D'Etat In U.S. History Unfolded In 1898, armed white supremacists overthrew the elected local government in Wilmington, N.C. The coup — the only one in U.S. history — was the culmination of a race riot and grew out of a conspiracy of powerful white Democrats.

Listen
How The Only Coup D'Etat In U.S. History Unfolded 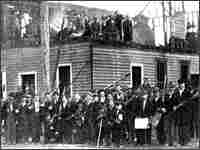 A group of white men posed for a news photographer at the fire-damaged offices of a black newspaper in Wilmington, N.C. Courtesy of the North Carolina Office of Archives & History hide caption 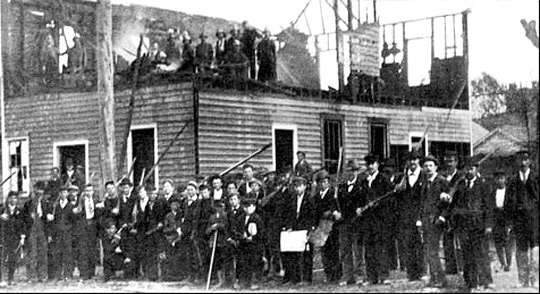 A group of white men posed for a news photographer at the fire-damaged offices of a black newspaper in Wilmington, N.C.

Courtesy of the North Carolina Office of Archives & History 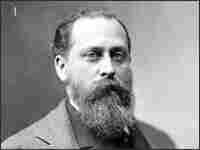 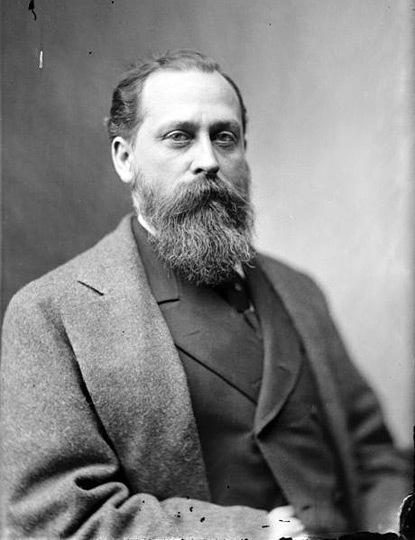 Think of a coup d'etat and images of a far-flung banana republic likely come to mind. So it might come as a surprise that it happened here in the United States — just once, in 1898.

A mob of white supremacists armed with rifles and pistols marched on City Hall in Wilmington, N.C., on Nov. 10 and overthrew the elected local government, forcing both black and white officials to resign and running many out of town. The coup was the culmination of a race riot in which whites torched the offices of a black newspaper and killed a number of black residents. No one is sure how many African-Americans died that day, but some estimates say as many as 90 were killed.

"Some of the elderly African-Americans told my stepfather that the Cape Fear River was running red with blood," Bertha Todd, a teacher, recalls in producer Alan Lipke's documentary series, "Between Civil War and Civil Rights."

Especially chilling was the fact that the insurgency had been carefully planned — a conspiracy by powerful white Democrats.

Southern Democrats lost their grip on power in North Carolina in 1894 and plotted to wrest control from the biracial Republican Party in 1898 elections. They campaigned on a platform of white supremacy and protecting their women from black men.

As the Nov. 8, 1898, vote approached, whites in Wilmington mobilized. They held supremacist rallies and parades and organized militias of "Red Shirts" to intimidate blacks from voting. The statewide election restored Democrats to power, and two days later, the white supremacists descended on Wilmington's City Hall.

Their leader, Col. Alfred Moore Waddell, had publicly threatened in a pre-election speech to "choke the current of the Cape Fear River" with black bodies, according to a 2006 report chronicling the events by the 1898 Wilmington Race Riot Commission. After the coup, Waddell was elected mayor of Wilmington.

In "Between Civil War and Civil Rights," George Rountree III reads from the memoir of his grandfather, a white civic leader in Wilmington who feared competition from blacks:

But Southerners were careful to give the voting restrictions a veneer of legality, wrote William Everett Henderson, a Wilmington lawyer exiled by the coup. Henderson's great-granddaughter, Lisa Adams, also appears in the documentary series and reads from his papers:

"So now we have bold and unscrupulous legislative enactments in open defiance of the national Constitution. And that last earthly tribunal, the U.S. Supreme Court, well knows the intent."

Read more about the issue of race in U.S. history.
Learn more about 'Between Civil War and Civil Rights'