Accessibility links
Release of Drug Offenders Strains Communities In the 1980s and '90s, more than a million people in the United States were arrested each year on drug charges. Most went to prison. Now hundreds of thousands of inmates are returning to their neighborhoods, and many communities are collapsing under the burden.

This is the fourth report in a five-part series. 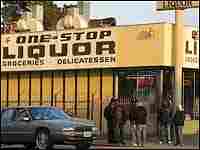 Young black men spend hours standing on street corners like this one in East Oakland. An estimated 3,000-4,000 parolees are in Oakland at any given time. For those without many options, the drug lifestyle can be very tempting-- if not for the high, for the money. Amy Walters, NPR hide caption 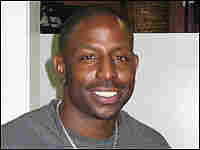 Damon Sykes sold drugs for 12 years without getting into serious trouble. He recently finished up his longest sentence, just six months. Now he's trying to find legal employment, but admits that the draw of drug money is hard to resist. One of his dreams is to be a rap star. Amy Walters, NPR hide caption

Hear Damon Sykes Rap About His Former Life as a Dealer, and His Dreams for a Life as a Rap Star 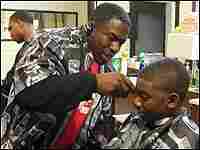 Kali Kirkendale is a barber and an East Oakland success story. After being in and out of prison several times for drug-related crimes, he started cutting hair for money and made it into a full-time job. He also is a trained body builder, but he says he was just fired from Bally's Gym once they learned of his record. The client above was one of the few in the barbershop on a recent day who had never been incarcerated. Amy Walters, NPR hide caption 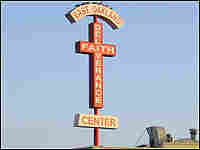 Local churches provide the only assistance for some parolees. There just aren't enough jobs or reintegration programs for all the prisoners now being released on drug charges that stemmed from the 1980s war on drugs. Amy Walters, NPR hide caption 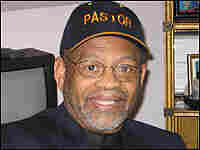 Rev. Alfred Smith leads Allen Temple Baptist Church in East Oakland. Allen Temple leads the way with parolee assistance. But with the massive number of parolees from the war on drugs, even Smith admits that his organization acts as a mere finger in the dyke. Amy Walters, NPR hide caption

In the 1980s and '90s, more than 1 million people in the United States were arrested each year on drug charges. Most went to prison. And for years, that's where they stayed... until now.

Hundreds of thousands of inmates, all by-products of a nearly four-decades-old war on drugs, are now pouring out of the nation's prisons. For the most part, they all return to the neighborhood they came from. Many of their communities are collapsing under the burden.

Nowhere is this more apparent than in East Oakland, Calif., where parolees released from prison start at a mandatory introduction meeting. At a recent meeting, 50 or so new parolees packed into a rundown building. Most of them had been out of prison only a few days.

Parole Officer Donnie Elliott tells them all to take their hats off. But one woman in the front refuses.

"You either take it off right now or I'll take you to jail," Elliott warns. But the woman doesn't move. Elliott grabs her and throws her up against the wall.

"Get up! get up! I gave you a chance," Elliott says. "You come in my goddamn meeting and you act like this. That's why you went to prison. Get you're ass out of here."

The woman is headed back to jail. No one in the room is smiling anymore. Next week, there'll be 50 more parolees sitting in these same chairs. Like almost all at this meeting, they'll likely be drug offenders, too.

The meeting's main attraction is Ron Owens, a 52-year-old former convict who's now a mentor.

"This is a test. This is only at test. Quit tripping," Owens tells them. "You look like you're free, right? You think you're free? Get to wear your own clothes? You had breakfast? You able to go 50 miles? Whoopee. You're in a four-step incarceration program — you ain't free yet."

Owens tries hard to get them to focus on the difficult road ahead: How to find a place to live, a place to work, money to eat. And do it without drugs.

'They Want Their Turf Back'

The mistake many of these parolees made was doing or selling drugs in the '80s and '90s. Many of them were the first targets of harsh, new drug penalties, prisoners of the war on drugs. In the years since, few have had rehabilitative programming, drug counseling, job training or education.

Owens says he has seen some of these men and women before — and he will likely see them again. California statistics say nearly 70 percent of the people in this room will be back in prison within three years.

"All the big, major drug dealers, they're coming home now — legendary heroes, so to speak," Owens says. "These guys want their turf back, and that's causing a conflict between the older convicts and the younger drug dealers. They're having shootouts on the streets. It's the untouchables all over again."

Junious Williams, a community activist who has lived in East Oakland since the 1980s, agrees. He says much of the violence centers on one corner, 73rd Avenue and International Boulevard.

"This is, like, one of the hot spot areas in terms of crime and violence," Williams says, standing on the corner. "They've had a lot of problems in this neighborhood, and in fact in this intersection, with violence."

Between 3,000 and 4,000 former inmates are coming home to Oakland every year. Most return to this rundown neighborhood, on the eastern edge of the city, many to this very spot.

That's beginning to show. Three years ago, Oakland had 82 murders. Last year it had 143. In those years, the number of inmates returning from prison exploded. And it's not just Oakland. Baltimore, Houston, Detroit, St. Louis and dozens of other places are scrambling to provide re-entry services for thousands of former convicts.

There was a time when many of these former convicts wouldn't have been convicts at all. In the early 1980s, drugs were illegal, to be sure. But over the next two decades, California alone added more than 1,000 new drug offenses to the penal code.

"The more drug-related crimes that we put on our books, by definition we're criminalizing more people, simply because we've defined more people to be criminals," says Daniel Abrahamson, a lawyer who has been involved in trying to reform California's drug laws. "One of the key aspects of the drug war is we've marginalized entire populations and subcommunities within our nation."

Some sentences were staggering. A two week-supply of crack cocaine would get you a mandatory five years in prison. That's the same amount of time, on average, that people spend in prison in this country for murder.

Dozens of states followed California's lead. And the laws only became tougher. In 1994, California introduced "Three Strikes, You're Out." Within three years, all the state's prisons were overcrowded and their budgets through the roof. They still are.

Rehabilitative programs were never part of the enforcement budget of the war on drugs.

At a halfway house of sorts in East Oakland, Program Director Aaron Hamilton swings open the door to a large bedroom. The state is paying for this program, run by a nonprofit group called Allied Fellowship. Hamilton walks through a row of 20 bunk beds as one man sleeps in the corner. The program wants them to live together so they can get used to being around people socially.

Every day for six months, the parolees who aren't working gather for workshops in the dining room. They learn how to open bank accounts and use proper grammar. They eat and sleep in the house and spend their break-time lifting weights and smoking on the back porch.

But consider the numbers. The program houses 60 parolees a year — out of the 3,000-4,000 who return to Oakland each year. And half of the men and women enrolled will drop out before the six months are up.

The problem isn't just physical addiction. For many people, the addiction is to the lifestyle. There's money in drug dealing.

Downstairs in the basement recreation room, 32-year-old Damon Sykes is taking a break on a beat-up couch. He joined the program a few weeks ago.

"If you spend real money with me, you're going to get real dope from me. That's what I said," Sykes says, laughing. "I always buy my dope soft. That way I can cook it. And then when I issue it out, you'd think I was the dope man from the Culinary Arts School."

Sykes says he wants to leave drugs behind, but he has been dealing off and on for almost 12 years. He's not sure how to do anything else.

"You're doing something where you know the end result is either death or jail," he says. "They say they have a war on drugs, where they're sweeping you off the street, but it's like a cycle that they've started now."

He says he sees more drugs on the street than ever.

"It used to be just different types of weed," he says, "but now everybody's everywhere. You've got E pills, crystal, crank, heroine, coke — a lot of different drugs. It's off the chain."

Sykes has already violated his parole once. That makes him a pretty typical resident of East Oakland. There aren't any numbers, but most people know someone who has been to prison. At a local barbershop on International Boulevard, eight or nine men wait in line. Everyone in the shop that day, with the exception of a woman and a 10-year-old boy, had been to jail or prison, mostly for drug offenses.

While carefully trimming a customer's hairline, Barber Kali Kirkendall says about 80 percent of his friends and family members have been to prison.

"If you don't have a good foundation — mother, father, wife, girlfriend — to help you, you're in trouble," he says.

Without such a support network, many inmates' only hope is to get into a program. Or into a church — like the one across the street from the barbershop.

For 25 years, Rev. Alfred Smith has watched his community fall apart. He created a jobs program at the Allen Temple Baptist Church, but there's a long line to get in. On a recent night, Smith sat in his office long after the choir has finished practicing.

"Can't people see what we're trying to do: To put our finger in the dyke to stop the floods of crime?" he says. "Why don't they come and help us?"

California doesn't have much money these days to help. It will spend $9 billion this year just on its prisons. During that same time, 125,000 more inmates will head back home.