Accessibility links
The Postmodern Films Of Guy Maddin Critic-at-large John Powers looks at the recent work of Canadian filmmaker Guy Maddin. His film Brand Upon the Brain! is now out on DVD, and his movie My Winnipeg is currently playing in theaters.

Critic-at-large John Powers looks at the recent work of Canadian filmmaker Guy Maddin. His film Brand Upon the Brain! is now out on DVD, and his movie My Winnipeg is currently playing in theaters.

Of Primal Forces, Places and People

Of Primal Forces, Places and People 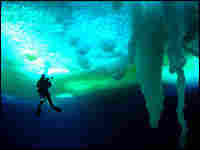 A diver explores Antarctic waters in Encounters At the End of the World. THINKFilm hide caption 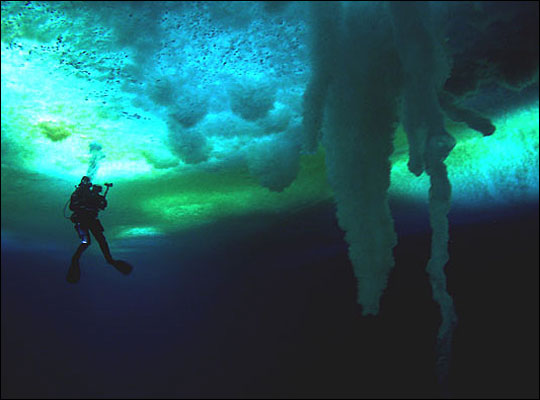 A diver explores Antarctic waters in Encounters At the End of the World. 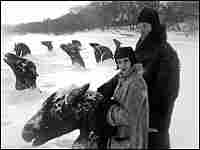 Frozen horse heads dot the landscape of "the Sleepwalking Walking Capital of the World" in My Winnipeg. IFC Films hide caption 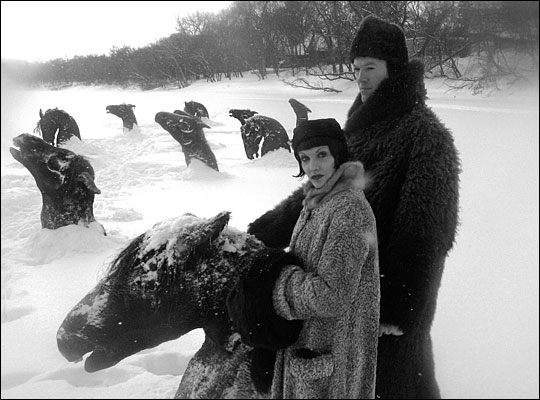 Frozen horse heads dot the landscape of "the Sleepwalking Walking Capital of the World" in My Winnipeg. 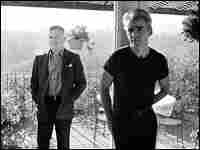 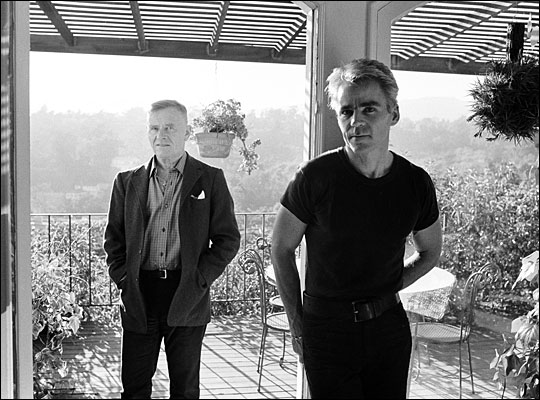 The relationship of Christopher Isherwood and Don Bachardy weathered controversy and — at times — condemnation.

Few things are more satisfying in the middle of the Marvel-Comics-at-the-Movies season than good documentaries — films that remind you that life is so much more amazing than tank-throwing slabs of CGI green beef.

Start with Werner Herzog's Encounters at the End of the World, shot on a trip the director made to the McMurdo Station in Antarctica. At first, the film is rambling: Herzog scans the settlement, which looks like an ugly mining town, and meets the sundry eccentrics who reside there.

Who, he asks, are these scientists and adventurers drawn to the edge of the planet, and what are their dreams? But then his camera plunges below the ice to behold the strangest, blobbiest, spindliest creatures — so much more unfathomable than the Incredible Hulk. And gradually, uninsistently, an eerier theme creeps in.

In his films, fictional and non-, Herzog loves to dramatize — even overdramatize — man's hubris toward nature: Explorers pit themselves against primal forces, which chew them up.

But the people he meets in Antarctica turn out not to be the hubristic ones. They're the reporters, the realists, the ones who say the South Pole is not as solid as in our imaginations. The ice is alive — breaking up, moving in ways we can't imagine. Human life on the planet is not assured. We are the overweeners.

He ends with underwater seal calls — high-frequency, inorganic-sounding, yet keening, like a message to extraterrestrials that this might be, in fact, the end of the world.

Herzog grapples with the external world; Guy Maddin pulls the world into himself.

His films, the latest being My Winnipeg, are montage-collages. He weaves found footage into faux-found footage to achieve an Expressionistic — and fetishistic — intensity; it's like watching psychosexual messages piped in from the collective unconscious of moviegoers.

Maddin's films are better in small doses, before the overload of his imagery wears you down, but My Winnipeg keeps you entranced. It's grounded in a place, Maddin's Manitoba hometown, where the inner and outer worlds reflect off each other.

The demolition of an old hockey arena is linked to the death of Maddin's father — and of the city's soul. He shoots an old woman playing his mother in stark close-up, superimposed over the landscape. She's emotionally withholding yet repressive, with an aversion to all things sexual.

The narrator, Maddin, pictures himself on a train, trying to leave Winnipeg but never getting beyond the outskirts. He tells the true story of horses in the 1920s driven from their barn by fire: They leaped into one of Winnipeg's four rivers and froze in place as the current met a sheet of ice.

Then he shows footage of people strolling on that ice among the frozen horse heads, unaware of the symbolism, while Maddin palpably sides with the animals, their faces contorted in agony. Like them, he's not going anywhere.

A more optimistic — even transcendent — note is sounded by Guido Santi and Tina Mascara's Chris & Don.

Chris is Christopher Isherwood, the gay Englishman famous for The Berlin Stories, which became the basis of Cabaret. Don is Don Bachardy, 30 years younger, whom Isherwood met on a Santa Monica beach.

From Isherwood's diary, read in the film by actor Michael York: "That spring, I realized that I had fallen deeply in love with a boy whom I'd known for only a short while, Don Bachardy.

"The 30-year difference in our ages shocked some of those who knew us. I myself didn't feel guilty about this. But I did feel awed by the emotional intensity of our relationship, right from the beginning; the strange sense of a fated mutual discovery."

Sounds pathetic, no? Rich old guy prowls the beach, finds movie star-obsessed stud-muffin who goes along for the ride. But Chris & Don tells one of the most tender yet unsentimental love stories I've seen.

Isherwood needed to find love and commitment outside his class. He pressed Bachardy to pursue his talent for drawing, and Bachardy became a marvelous portraitist.

They had periods of estrangement, took lovers, pushed the limits of domesticity. But in the end, Bachardy was by Isherwood's deathbed, drawing him compulsively, drawing his body in the hours after death.

The sequence, like the movie, is shockingly open and heartfelt. Barchardy is trying to look through the surface to the core of existence — and of his love. Grounded though it is, Chris & Don is a documentary of the human spirit.