Accessibility links
Jerry Wexler: A Record Man Remembered Wexler, the former Atlantic Records co-director who produced some of the most groundbreaking rock and soul music of the 20th century, died Friday. He was 91. Journalist Ashley Kahn spoke with him regularly, and has this appreciation. 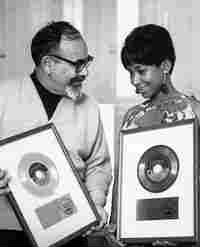 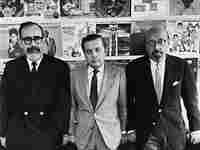 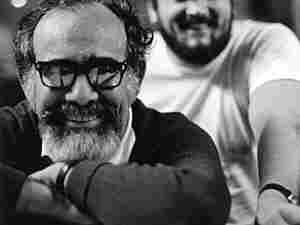 Jerry Wexler, the former Atlantic Records co-director who produced some of the most groundbreaking rock and soul music of the 20th century, died Friday. He was 91. Journalist Ashley Kahn spoke with him regularly, and has this appreciation.

Jerry Wexler's personal taste predicted the path of popular music for more than 30 years. He was one of the last links to the roots of the modern music business — a time when legends were being born.

Wexler's specialty was rhythm and blues. Even the term was his: In 1949, he invented it as a reporter for Billboard magazine.

In 1953, Ahmet Ertegun, head of Atlantic Records, asked Wexler to join the company. The independent label quickly grew in strength, releasing a steady stream of R&B hits produced or promoted by Wexler: songs by Chuck Willis, the Drifters, the Coasters.

"When I came into the company, it was already a fairly successful enterprise," Wexler once said in an interview. "Ruth Brown, Joe Turner, Ray Charles were already there. The only music we recorded was the music that we liked and had sales possibilities."

Most of mainstream America dismissed this music as uncultured — too raw, too black. Wexler produced what looked to be a crossover hit for Lavern Baker — "Tweedle Dee" — but it was Georgia Gibbs' white cover version that made it to the top of the pop chart.

Wexler was a force of nature — shrewd, determined — and he had a knack for matching singer and songs and finding the right recording studio.

As rhythm and blues evolved into rock and soul in the '60s, Wexler kept up with the changes, helping to build Atlantic into a major record company. He fashioned distribution deals with labels like Stax Records, and hit a gold mine when he brought rock groups such as Led Zeppelin and the Allman Brothers into the Atlantic family.

Wexler's greatest year was 1967, when Aretha Franklin scored a big hit with "Respect." When Wexler signed Franklin, he felt she had yet to reach her potential. He had asked her to drop her cabaret style and sing the way she had learned in her father's church.

Wexler left the Atlantic label in 1975 and went freelance, producing award-winning albums for Dire Straits, Etta James and Santana. He helped win a Grammy for Bob Dylan in 1979.

"People ask me, 'What are the qualifications to be a producer?' " Wexler said. "A good ear for intonation, a feel for rhythm and, third, information."

Wexler's musical knowledge was vast. He could recall details at will: a record label, a lyric, the name of a sideman. His education began when he first heard jazz while growing up in New York City. It was the height of the Depression, and he was one of an informal, fanatical group of record collectors. A few, like Wexler, became captains of the music industry.

Wexler outlived almost all of his record-collecting buddies, as well as his Atlantic colleagues.

"I'm rusticating and unemployed," Wexler said. "Jerry F---- Wexler is 90 years old? Gimme a break. A tree in the forest gets a ring every year. They don't hold a reception or give it a medal."

The last time I saw Wexler, he was surrounded by photos of himself with his legendary friends: Aretha, Willie, Brother Ray, Dr. John. A Rock and Roll Hall of Fame in his own living room. He was still erudite, funny and salty as ever.

"Back in the '50s and '60s, we had a special aura," Wexler says. "We were regarded as the little Tiffany record company. Somebody asked me, 'To what do you ascribe the success of Atlantic?' And, very vaingloriously, I said three things: 'taste, probity and intelligence.' Yeah, and humility."

Ashley Kahn is author of A Love Supreme: The Story of John Coltrane's Signature Album.