Accessibility links
Classical Music Is Houston's Best-Kept Secret Education and musicians in residence fuel a robust contemporary classical scene in the Texas city. It's supported by the success of the Houston Symphony and local public radio, which has helped build an open-minded audience for music that's both cerebral and fun. 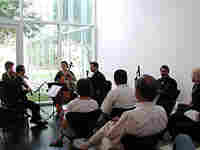 Goodbye at the River 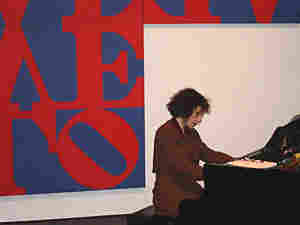 Education and musicians in residence fuel a robust contemporary classical scene in Houston, Texas. Groups such as Da Camera and Musiqa put on free shows in unexpected places like art museums, explain what people are about to hear and tell them what to listen for. They're supported by the success of the Houston Symphony and local public radio, which has helped build an open-minded audience around music that's both cerebral and fun.

Sarah Rothenberg is a concert pianist and, for the last 15 years, the artistic director and inspiration for Da Camera. Rothenberg lives half of the year in New York City and the other half in Houston, and says her colleagues in New York are often surprised to hear about her thriving career in Texas.

"Part of this has to do with just a certain national attitude about what Texas is about," Rothenberg says. "When you go to a place like Houston, Texas, you discover just how complex America is. And all the stereotypes that people might carry around really go out the window."

Da Camera is an ever-changing collection of vocalists and instrumentalists from all over the world; each was invited by Rothenberg to join her for a season of performances in Houston. She says she's been able to build an audience for new music by simply taking the time to explain to people what they're about to hear. Rothenberg introduces almost all of the concerts herself and writes a number of the program notes. "This is a social thing, as well," she says, adding that music is "a communicative art."

Contemporary classical music has a bit of a reputation, some of it probably earned, for being difficult listening. Nevertheless, Rothenberg says that audiences will hang in there with challenging compositions if they aren't bludgeoned with an endlessly dissonant cacophony that, by the end of the evening, has them contemplating suicide. Of course, complementing the concert experience by locating the performance next to world-class pieces of visual art helps.

Da Camera is in residence at one of the pre-eminent museums in the country. The Menil Collection displays a revolving collection of 15,000 works. It's best known for The Rothko Chapel, which is devoted to the work of 20th-century American painter Mark Rothko. The museum has six spaces, filled with contemporary art, which it turns over to a variety of music groups.

Another group, Musiqa, also plays at the Menil. "Contemporary music is often treated as being academic," says Anthony Brandt, who founded the group six years ago. "We figured the best remedy to that is to get it out of the academy and into the city."

Musiqa is made up of five composers and music professors from the Shepherd School of Music at Rice University and the Moores School of Music at the University of Houston. In addition to playing at the Menil, Musiqa has its own subscription concert series, and it gives free concerts at the Houston Museum of Contemporary Art in order to build its audience. Brandt says contemporary music doesn't have to be cerebral; it can also be fun.

So how did this all come about in Houston? Some of the credit goes to the success of the Houston Symphony and the Houston Grand Opera, both of which have reputations as places where contemporary music can get a hearing. Artistic director Aurelie Desmarais says the symphony commissions one new piece every season and gives it careful thought — it has to, or it'll hear about it. "If it's a terrific piece of art, then it almost always resonates," she says. The audience "is a little more conservative, so it does respond to a less aggressive, kind of out-there harmonic language."

Classical music lovers who've learned to keep an open mind from listening to the Houston Symphony bring those open minds to performances by Da Camera or Musiqa. Or to the concerts of another Houston contemporary classical music organization, The Foundation for Modern Music. Adam Tendler, its artistic director, says that he thinks the scene in Houston is special because the different groups "all kind of recognize each other's struggle, and we recognize the stuggle of modern music in general."

That struggle would be considerably more pronounced without Houston's public radio station, KUHF. A number of public radio stations around the country that used to play classical music have switched to news and talk, but not KUHF. It is the hub around which the city's classical-music scene rotates. Houston composers and performers not only get airplay, they also work on the air as staff.

The Houston contemporary classic music scene is thriving. And thanks may be in order to the high gas prices that plague other cities. With prices over $100 a barrel, oil money is once again floating around the city, treating the average citizen to a bounty of free, and excellent, contemporary music.