Accessibility links
Benji Hughes Crafts An 'Extreme' Debut After releasing a 25-track double album titled A Love Extreme, the singer-songwriter has drawn comparisons to Beck and The Magnetic Fields' Stephin Merritt for his electronic- and folk-tinged pop and distinctive lyrical voice. Here, Hughes talks about his songs and the influence the South has on his music.

Neighbor Down the Hall

Love on a Budget

Love on a Budget 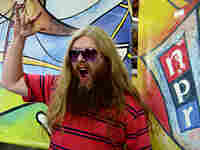 After releasing a 25-track double album titled A Love Extreme, singer-songwriter Benji Hughes has drawn comparisons to Beck and The Magnetic Fields' Stephin Merritt for his electronic- and folk-tinged pop and distinctive lyrical voice. 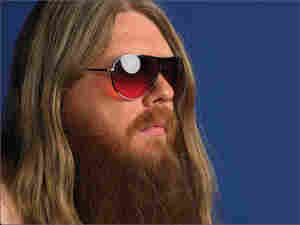 Mostly written with bandmate and acclaimed session musician Keefus Ciancia, the album mixes hook-laden choruses and danceable beats with Hughes' drowsy voice and living-room production. The melodies are catchy and fun, but at the heart of his songs are themes of love and heartbreak.

Working with Ciancia, Hughes spent more than three years on the record, in the process writing too much music to fit on a single disc.

"There were so many songs that it seemed wrong to leave anything out," Hughes says. "And to put it all on one CD and make you have to listen to something for way too long... I mean, it's like, listen to the first CD — it's about 30 minutes — and if you want to listen to the other one, cool. It just made sense."

Hughes now splits his time between his native Charlotte, N.C., and Los Angeles, where he previously worked as a songwriter for a music publisher and a composer for commercial jingles — including one for Captain Morgan's rum. Later, Hughes collaborated with filmmakers Judd Apatow and Jake Kasdan, contributing to the song "Let's Duet" from the comedy Walk Hard: The Dewey Cox Story.

With so many songs on A Love Extreme, Hughes says he doesn't have a favorite. "I feel really great about being able to say no," he says. "I love them all in different ways, and it just depends on what day it is."